Lisa A. Kirschenbaum is a professor at West Chester University. She lives in Philadelphia, Pennsylvania, and has been a member since 1993. 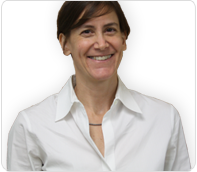 When did you first develop an interest in history?
I cannot remember a time when I was not interested in history. The Cold War no doubt played a part in channeling that interest into Russian history. I started college in the early 1980s—the era of the “evil empire” and the ascension of Mikhail Gorbachev. The Soviet Union was clearly important. But it was Russian literature, which I had discovered in high school, devouring Crime and Punishment over winter break my senior year, that made me want to understand Russia’s past.

What projects are you currently working on?
My book International Communism and the Spanish Civil War: Solidarity and Suspicion was published in July 2015. Exploring the transnational exchanges that occurred in Soviet-structured spaces—from clandestine schools for training international revolutionaries in Moscow to the International Brigades in Spain—the book uncovers complex webs of interaction, at once personal and political, that linked international communists to one another and the Soviet Union.

As is often the case, I find myself wanting to tell some of the stories that did not make it into the book. First up is an article on how Michael Gruzenberg, a Russian Jew who fled Russia after the Revolution of 1905 and spent a decade in Chicago running a school to teach immigrants English, transformed himself into Mikhail Borodin, the Comintern advisor to the Chinese Nationalists.

I am also working on a couple of projects related to teaching. With co-authors Choi Chatterjee and Deborah A. Field I am completing a textbook, Russia’s Long Twentieth Century. I am also working with Barbara Walker to translate Olga Berggolts’s memoir Daytime Stars. The project came out of our desire to bring Berggolts’s unique perspective—she was a child in 1917 and the voice of Radio Leningrad during the World War II blockade—to our students.

Have your interests evolved since graduation? If so, how?
I have worked on a wide range of topics—children and childhood in the early Soviet period, 50 years of memory and mythmaking around the blockade of Leningrad, and most recently international engagement with the Soviet project. So, yes, in some ways I have evolved quite a bit. I have always been interested in the global resonances of the revolution, but with my work on international communism that interest became more self-consciously transnational.

But in some ways I have not evolved all that much. I am still fascinated by the fundamental question of how individuals come to understand their lives as part of history. My first book asked not only how the revolution remade children’s lives, but what children made of the revolution. More recently, I have been asking how communist commitments shaped personal lives and how personal relationships influenced political understandings.

Is there an article, book, movie, blog etc. that you could recommend to fellow AHA members?
I would recommend Lydia Ginzburg’s unsparing account of the blockade of Leningrad, Leningrad Diary, to anyone interested in the experiences of civilians in wartime. It’s not a diary, but a fictionalized memoir of the siege told by an intelligentsia everyman who is resilient and anguished, ashamed and astounded by his survival.

What do you value most about the history profession?
I love that both research and teaching are vital to history as a profession. I value the powerful interchange between teachers and students asking big questions and surprising one another.

Why have you continued to be a member of the AHA?
There are so many reasons! I value the professional resources I find in Perspectives. I love dipping into far off fields via the book reviews in the American Historical Review. Perhaps most importantly, the AHA provides a crucial voice for the profession at a time when the value of the liberal arts has come under attack from so many quarters.

Other than history, what are you passionate about?
I try to never pass up unusual travel opportunities.