Annual Meeting , From the Executive Director

Reflections on the Annual Meeting 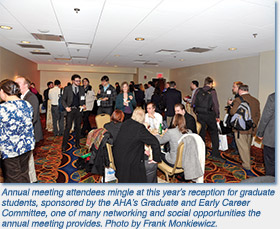 I’m not sure when I attended my first AHA annual meeting. Probably 1981, although it could have been earlier. I’ve been to a lot of them. Four years on the job market; committees—AHA and otherwise; responsibilities tied to my work at the Newberry Library and as a series editor; often just to enjoy myself, cruising book exhibits and visiting with friends from graduate school who work in fields different from my own. And oh yes, from time to time a session or two—maybe even three if I was on a panel. Early on there were more sessions, perhaps because of a more serious sense of professional purpose and perhaps because I had fewer other responsibilities (I would like to believe the latter). I enjoyed attending the AHA, a fact that perplexed friends and colleagues until I became the executive director. Now they had an explanation. Whatever odd quirks inclined me towards administration in general and this sort of administration in particular must also have been attracting me to a meeting that others avoid like the plague. So that’s my new challenge: drawing in the hundreds (at least) of historians who have traditionally stayed away.

After all, this is the conference of bad memories: the painful early-career experience of knowing almost nobody (hence the attendance at sessions?); engaging finally in deep conversation (we thought) with someone who was actually glancing around for someone more important to come along. And for those of us younger than roughly 70, the hazy recollection of the job register and all activity related to it will forever color our perspective. It doesn’t help much to say that it’s better than it used to be. The long tables are gone. There are no more men sitting on rumpled hotel room beds throwing questions to uneasy women sitting in stiff chairs at the end of the bed. At least there aren’t supposed to be (please report any such incidents to the AHA Professional Division). Beginning this year we have a “quiet room” where one can relax before an interview. Technology has facilitated communication between hiring committees and candidates.

Still, there are too few jobs and the experience of looking for one produces high levels of anxiety; that anxiety is burned into our minds, and shapes our memories of the initial experience. To this problem, a participant in this year’s Graduate Student and Early Career Forum suggested one solution. She isn’t on the job market yet. She was enjoying her first AHA, and encouraged us to think of ways of making her experience typical. Great idea. By next year we will have a mechanism to enable first and second year students to attend at minimal registration costs, and a better way of letting them know how inexpensive the hotel rooms can be (approximately $55/person at double occupancy).

But we need to make it easier for attendees at all stages of their careers. We need to increase the comfort level of those like one of my most trusted colleagues who claims that the AHA is not a place for those who readily feel “lost or shy.” We have begun to experiment with an orientation at the meeting’s start, which should be accompanied by ongoing opportunities to meet future friends, collaborators, and colleagues in contexts other than the standard reception, where so many people enter, search desperately for someone they know, struggle with a conversation or two while munching, and then leave. Social media can perhaps help here as well, fostering pre-convention interaction online that will enable those who have already “met” one another to meet anew, this time in person.

What I’ve realized is that committees that plan conferences tend to attract people who are comfortable at conferences. We need to think hard about how to create situations that facilitate collegial interaction among people who come from a wide variety of workplaces. Please contact us with your suggestion. We can’t promise that we will take them all up. Some things cost too much money. Some things are impossible in particular conference venues. But we can promise that we will take every idea seriously, and that if it is not feasible we will ask how we can learn from the suggestion and perhaps use it to generate a new one.

And I also urge those members (and prospective members) who have stayed away because of their memories to give it a try once more. It’s more fun, and more stimulating than you probably remember—especially with a little work beforehand perusing the program (also different from what it used to be) and contacting friends and former colleagues who might also be considering attending. The hotel rooms are inexpensive, and the 2012 meeting will be in Chicago, which is easy to get to, and has wonderful weather in January.