A High School Teacher at the Annual Meeting 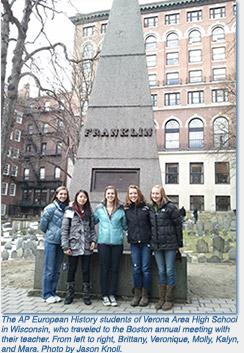 I’ve been a member of the AHA since my years as an undergraduate student, but I never went to an annual meeting until this year. What made my first trip to this massive gathering of historians even more memorable was the fact that I brought five of my AP European History students with me. The trip was an overall success: we sat in on five sessions, saw some of Boston, and walked away with a handful of books.

I picked my students by holding an essay contest in my AP European History class. I estimated the cost of airfare and the hotel and had them talk to their parents before writing the essay. Once their parents gave their approval, 17 students wrote an essay arguing why I should take them with me. The only information that I gave them was the theme of the meeting and the web address of the AHA. I did not give them my rubric beforehand so that they would not merely write to the rubric. I scored them on three criteria—their passion for history, what interest they have for the theme, and why they would benefit from the trip. The five best essays were written by young women.

Once I gained approval from my school board, I had to determine which sessions we would attend. I had two objectives—they had to fit into our curriculum and they had to hold the interest of high school students for two hours (after all, what we as historians might find interesting may not necessarily be so for others). I narrowed the list of sessions to around 15, told them which ones I thought would be most beneficial to them, and then let them as a group decide on the specific choices.

Since my students’ typical view of a historian was that of professor, we attended the session on Thursday about the various other careers in history—archivist, preservationist, curator, instructor or historian for the military, and documentary editor. They walked away with a newfound interest in what they could do with a degree in history.

The highlight of our trip came on Friday morning when we attended the session about Carlos Eire’s latest work, A Very Brief History of Eternity. My students and I all read and discussed the book so that we could attend the session, understand the panelists, and even perhaps ask questions. Prior to our departure for Boston, I e-mailed Professor Eire about our plan and asked if he would do us the honor of having lunch with us after the session. Much to my surprise, he replied that he would be delighted to do so. My students were able to follow along with the first two panelists’ comments, although they (and I) struggled with the third panelist’s arguments dealing with space and time (I think). We lunched at Au Bon Pain (since we don’t have those here in Wisconsin), and proceeded to have a very pleasant conversation with Professor Eire. He was extremely personable and answered all of my students’ questions with humility and understanding.

We spent Friday afternoon walking the Freedom Trail and then returned to our hotel to get ready for the receptions. We first attended the reception hosted by the National History Center. It was fairly obvious that we were not the usual attendees for the annual meeting, but the historians at the reception were actually quite welcoming to my students. Two people in particular (that I saw, although there could have been others) were very interested in what my students thought about the meeting—James Banner of the NHC and Marian Barber (Univ. of Texas). Since all of my students were young women, I thought it would also be appropriate to attend the reception hosted by the Coordinating Council for Women in History. Sandra Dawson (NIU), the executive director, took some time to speak to my students about the role of the Council and the two co-sponsors, the Peace History Society and the Committee on LGBTQ History. We ended the night by moving to the reception hosted by the Society for Historians of American Foreign Relations. One of the panelists from the session on careers in history, Nick Sarantakes (Naval War College), spent a considerable amount of time talking to my students about majoring in history and the uses of a history degree. He even gave them his card and told them that if they ever had any questions about history to e-mail him; this had a tremendous impact on my students.

Saturday was our busiest day, with three sessions and the screening of the film, The Conspirator. Our first session was about the public uses of history and the global war on terror. It was interesting to hear the various arguments made by the panelists. More importantly, however, I felt it was important for my students to hear the calls for historians to be more involved in public discourse and to understand how policymakers and government officials have misused history. The midday session covered the various issues and topics in teaching genocide. As a teacher, I found it useful, but again, I thought it was a good opportunity for my students to learn about the issues that teachers deal with when teaching. Finally, we attended the lecture on military history by Gerhard Weinberg about myths of the Second World War. Although the students were a bit exhausted mentally, they were still enthused about listening to one of the world’s eminent historians. We parted ways after the lecture, with the students going to the film screening, while I went to the reception hosted by the Conference Group for Central European History. The students thoroughly enjoyed the film. Additionally, at one point during the night they rode in the elevator with Florencia Mallon (Univ. of Wisconsin–Madison). She was extremely pleasant towards them and took an interest in their experiences at the meeting. My time at the reception proved to be a great time for networking, although as a high school teacher I felt a bit out of place. I ended up, however, having pleasant conversations with Francis Raška (Charles University, Czech Republic), Eric Weitz (Univ. of Minnesota), and Marion Berghahn (Berghahn Books).

On Sunday, we decided to skip the sessions and walk through the exhibit hall one last time. The vendors were nice to us, although I was surprised at how expensive some of the books were. I was, however, able to pick up some exam copies of books for a new course, The History of American Foreign Policy, as well as my AP European History class. Afterwards, we took a trip out to Harvard and rubbed the foot of John Harvard. I wanted to see the history department, but unfortunately, the doors to Robinson Hall were locked.

I definitely count the trip as an overwhelming success. But I did leave with an uneasy sense of a disconnect between secondary school teachers and “professional” historians. Some people seemed to be surprised that I was at the AHA. Is it that shocking for a high school teacher to be at an annual meeting of historians?  Such perceptions will perhaps disappear if the AHA can do more to promote high school teachers as historians and encourage their participation in the annual meeting. Of course, this cannot be accomplished by the AHA alone. Colleges, universities, and even secondary school teachers themselves have to play significant and important—and collaborative—roles in such a movement.

However, a sign that such desirable changes are possible lies perhaps the fact that many historians treated my students and me with kindness and respect during our stay in Boston. I specially thank them. I plan on attending the annual meeting next year and hope to rekindle some of the conversations I began this year.

Jason Knoll teaches social studies at Verona Area High School in WI. You can read his and his students’ thoughts about the annual meeting at www.verona.k12.wi.us/page.cfm?id=5356.