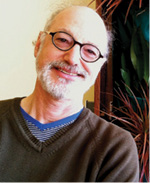 When members open the April issue of the American Historical Review, they will find four articles on subjects ranging from medieval law and the Atlantic slave trade to revolutionary Cuba and the long history of self-determination and human rights, along with an AHR Exchange on a recent publication that has attracted a lot of attention, The History Manifesto. Our usual extensive book review section contains 200 standard reviews in addition to four featured reviews. “In Back Issues” offers readers a glance at issues from 100, 75, and 50 years ago.

In the first article, “Medieval Law and Materiality: Shipwrecks, Finders, and Property on the Suffolk Coast, ca. 1380–1410,” Tom Johnson builds on recent work in the humanities that has looked critically and with a historical eye at conceptions of material and materiality. One function of law is to order the material world, and the approach Johnson takes in showing how medieval legal processes categorized objects and established rules for their use will help historians to understand the pervasiveness of law in premodern society. Johnson analyzes a set of court rolls from late 14th-century England that record the shipwrecks found by sailors off the coast of Suffolk. His analysis brings out the ontological categories employed in these rolls to organize the wrecks—the finder of each object, its name, and its value; these were not merely neutral descriptors, he argues, but politicized constructions. The constraints of the court’s conception of materiality circumscribed what these washed-up objects could be: it transformed them from random, ownerless things into legitimate pieces of property, owned by the office-holding elite of the local community. Legal processes thus organized materiality in convenient ways, just as physical objects gave substance to law.

The AHR has for many years featured cutting-edge work on Atlantic history in general and the slave trade in particular. “Atlantic History and the Slave Trade to Spanish America,” by Alex Borucki, David Eltis, and David Wheat, adds to this work. The authors present new data on transatlantic slave arrivals and a comprehensive examination of the intra-American transimperial traffic, thereby offering a fresh assessment of the slave trade to the Spanish Americas. Their analysis of this material leads to a new appreciation of not only the African presence in the Spanish colonies, but also—given the links between slavery and economic power before abolition—the status of the whole Spanish imperial project. Overall, they find, more enslaved Africans permanently entered the Spanish colonies than the whole British Caribbean, making the Spanish Americas the most important political entity in the Americas after Brazil to receive slaves. Two-thirds of the more than two million enslaved Africans arriving in the Spanish Americas disembarked before 1810—that is, prior to the era of large-scale sugar cultivation in Cuba and Puerto Rico—which leads Borucki, Eltis, and Wheat to reconsider the real significance of slavery in the Spanish colonies. The history of the slave trade to Spanish America had implications for the whole Atlantic, they conclude, in the sense that it drew on all European branches of this traffic, and captives from all African regions engaged in this traffic landed in at least one of the many Spanish colonies in the New World.

No phrase has had greater political resonance in the last one hundred years than “self-determination.” As Eric D. Weitz notes in “Self-Determination: How a German Enlightenment Idea Became the Slogan of National Liberation and a Human Right,” since the 1940s it has become the favored slogan of nationalist and anticolonial movements around the globe, written into virtually every major human rights declaration. In its origins, however, self-determination was an Enlightenment concept relating to individuals. From the late 18th century to World War I, it evolved from a primarily individualist into a collectivist doctrine. Weitz tracks this dramatic, often unnoticed transformation, untangling the diverse meanings of self-determination to examine the dilemmas intrinsic to the history of human rights, notably the tension between individual and collective rights. He provides an account of the different meanings of self-determination to the socialist movement of the 19th century, beginning with its major Enlightenment proponent, Johann Gottlieb Fichte, as well as to its many advocates in the 20th century. As self-determination became a doctrine related to national or racial belonging, it lost much of its Enlightenment meaning as a concept fundamental to individual self-constitution and emancipation. Self-determination’s 20th-century proponents argued that individual rights flowed naturally and smoothly from national liberation, but the same doctrine that underpinned the emancipation of the national or racial elect could justify the brutal exclusion of others.

In “‘Cuba, My Love’: The Romance of Revolutionary Cuba in the Soviet Sixties,” Anne E. Gorsuch explores the underlying longings, desires, and anxieties in the relationship between the USSR and Cuba in the 1960s. Her article explores what it meant to “fall in love” with Cuba, both literally—through an exploration of the cross-cultural experience of Soviet and Cuban citizens traveling for love, work, or education—and figuratively, through an exploration of the place of Cuba in the Soviet cultural imagination. For some members of the Soviet intelligentsia, revolutionary Cuba served as a mirror that reflected the Soviet Union as they wished it could be. If the dominant metaphor of the relationship was passion, however, there was also tension: between husband and wife, parent and child, white and black, Second World and Third. It is in the realm of sexuality, as well as in expectations and experiences concerning race, that Cuba’s emotional norms differed most visibly from Soviet values and modes of expression, and where Cuba as Third World object of Soviet verbal and visual power was particularly evident. By the late 1960s, disillusionment with Cuba was one of a number of disappointments—culminating in the crushing of the Prague Spring in 1968—that marked the end of the Soviet sixties.

The AHR Exchange, “On The History Manifesto,” features essays by two sets of historians: the first a critique by Deborah Cohen and Peter Mandler, who offer a very sharp assessment of this recently published book; and the second a response to Cohen and Mandler by the book’s authors, David Armitage and Jo Guldi. The History Manifesto, made available by Cambridge University Press as an open-access publication, poses a spirited and sustained challenge to current historical practice—especially, the authors claim, the recent retreat from long-term considerations of historical development. The book has generated extensive discussion, in journals, in the press, and on the web. Here we offer a forum in which its critics and its authors are both given a voice. In the spirit of the discussion, we are posting this Exchange on our website.

June’s issue will include articles on ancient history and slave rebellions, along with an AHR Roundtable, “The Archives of Decolonization.” The AHR Conversation, originally scheduled for April, has been postponed for a later issue. 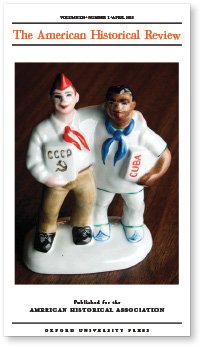 In the early 1960s, a period of intense Cold War competition between communism and capitalism, Soviet citizens were introduced to Cuba—through film, print, images, and music—as a source of socialist inspiration. Just as their own Russian Revolution of 1917 had freed them from the yoke of tsarism, they viewed the Cuban Revolution as a “humanitarian” struggle that had liberated an oppressed people from the absolute rule of a dictator. They were especially enamored of Fidel Castro, whose magnetic appeal was such a contrast to their own leaders. Castro, in turn, was drawn to the Soviet model of modernization, and soon the two countries were engaged in an exchange of trained specialists, teachers, and students. Soviet citizens’ initial excitement about Cuba had faded by the end of the decade, however. What they had originally viewed through a romantic lens as a tropical island of liberty came to be seen as merely another country that their government supported at the expense of its own population. In “‘Cuba, My Love’: The Romance of Revolutionary Cuba in the Soviet Sixties,” Anne E. Gorsuch explores the 1960s Soviet-Cuban relationship, showing how the transition from passion to disillusionment helped bring the Soviet sixties to an end.