Practicing Public Speaking and Promoting Intellectual Agility, One Four-Minute Speech at a Time

We have all been to conferences where presenters exceeded the time limit, or failed to effectively convey their research and its significance to their listeners. And perhaps it is no wonder—graduate training programs do not necessarily emphasize the importance of public speaking as a skill in its own right, deserving of analysis and practice. This oversight is unfortunate, given the centrality of oral presentations to professional activities both within and beyond the professoriate: we rely on the spoken word to communicate our research, interview for jobs, teach students, and take part in faculty and other administrative meetings. Likewise, employees of nonprofits, professional organizations, law firms, and large corporations are also often expected to verbally impart information to an audience.

At the University of Chicago, we have organized a number of workshops and events under the umbrella of the Career Diversity initiative, among them an internship program and a series of brown-bag seminars featuring PhDs now employed in administrative positions at U of C. The program that has drawn the greatest participation so far has been a series of workshops on public speaking, co-organized by William Rando and myself. Rando, who is the new director of the University of Chicago’s Center for Teaching, used to work as a public speaking coach and has a wealth of experience helping graduate students and faculty improve their communication skills.

In our first meeting, which took place in early November, we devoted ourselves to identifying and discussing the elements of a good talk. Rando started us off by asking everyone in the room to take a few moments to jot down some observations about a talk or lecture that we had recently attended. We then discussed our impressions as a group, with Rando asking probing follow-up questions: “Did you learn something from that talk?” “Did the speaker seem to really care about the topic?” “Did the speaker use her voice effectively?”

The group, which consisted of about 10 graduate students and one professor (myself), had witnessed a broad spectrum of public presentations: some were thrilling, provocative, and memorable; others provided rich material but were hard to follow or hear; and yet others had been well-mounted efforts that nonetheless fell flat for lack of rigor and depth. With Rando as our skillful guide, we reached the obvious, although too often overlooked, conclusion that effective public speaking requires attention not just to substance, but also to performance. With that insight, we established a fair game principle for our group: we could critique not just what people said when making a presentation, but how they said it.

At our next meeting, for which students prepared brief five-minute speeches on their historical interests, we put this principle to the test. After each mini-talk, students asked substantive questions, but they then moved onto other issues. They gently pointed out their colleagues’ verbal and gestural tics, praising effective hand movements and spoken cues, while sounding a cautionary note about distracting fidgets and habits. These discussions were supplemented by feedback sheets that Rando provided, which we filled out for each presenter. The sheet included reminders about the essentials of a good talk, as well as space where observers could make notes on the strengths of a presentation and suggestions for improvement:

In the next three sessions, we followed a different tack: the group decided that it would be useful to practice public speaking by doing impromptu speeches. We devised a system: I made a box with words that could inspire historical thinking, such as “Magna Carta,” “rice,” “caravel,” and “Ancient Mali.” Each student drew up to three words from the box, chose one, and then took two minutes to prepare a four-minute presentation that incorporated the term at least once. We then devoted six minutes to questions and discussion.

Maura Capps, a fifth-year student, drew the term “Henry VIII” during one of these impromptu speaking sessions. She laughed, recalling the experience. “What did I learn? Remain calm. Don’t panic.” Although her own area of expertise has little to do with that English king, she managed to pull together a punchy talk that included, among other things, a verse from a song. In a more serious vein, Capps reflected on what she took from participating in the workshop: “I learned the importance of getting to the point quickly, without a great deal of preamble. And your body! As Bill [Rando] would say, it is really important to ‘bring your body to the talk.’” She added further that it was a useful environment in which to practice: “I appreciated that it was a judgement-free crowd. It was a friendly group, and we were all in it together. We all knew that we were each going to have our turn up there at the podium!”

Which is, in effect, exactly the point: public speaking is a skill all historians will need, whether they end up working in the professoriate or in government, publishing, the nonprofit world, or the private sector. The Career Diversity project poses four central challenges to us, which include helping students develop their communication skills and achieve intellectual self-confidence and agility. Four-minute speeches in a friendly room may not constitute a huge stride towards achieving those goals, but it seems a firm and hopeful beginning. We are scheduled to continue the sessions in the spring quarter. 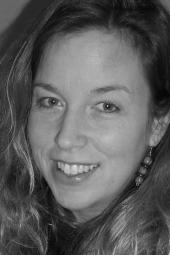 Emily Lynn Osborn is associate professor of African history at the University of Chicago. She is a member of the faculty committee directing the U of C’s participation in the AHA’s Career Diversity for Historians initiative. She is also the faculty director of the department’s professionalization workshop for 2014–15.