Interning at the National History Center

About a week before the fall semester of my sophomore year of college began, I received a series of e-mails from the GW History Department, each detailing a different history-related internship opportunity opening during the semester. Having never held an internship before, I was quite anxious to apply for a position where those skills I did have would be useful, and, more importantly, where I’d be able to pick up additional skills. After reading through the program descriptions, I decided to apply for an internship with the National History Center. Two weeks later, after interviewing with the assistant director, Dr. Amanda Moniz, I began my internship.

The first few weeks I spent at the center were both incredibly interesting and very surprising. While I had expected much of my workload would involve conducting research, I spent most of my time working on the center’s website. In fact, my first major assignment was to create a video library of all past National History Center events. This involved combing through the website to first compile and then to categorize the dozens of expert lectures the center had held over the previous few years. While that may sound rather monotonous, it was in fact one of the most interesting assignments I’ve ever been given. In order to categorize the lectures, I had to watch the videos and read up on the presentations, which both forced me and gave me an excellent excuse to learn about everything from Cold War legacies to the assassination of Patrice Lumumba. The center brings in true academic experts for its events, and the material, which I am fairly certain I would never have seen otherwise, was fascinating.

I was next charged with compiling a list of history-related fellowship holders in and around the DC area. It was during this assignment that I realized how varied and extensive the field of history could be. That’s not to say I wasn’t already aware that history is an extensive field (of course it is!), but it wasn’t until I began contacting historical institutions on behalf of the center that I realized just how large the historical discipline is. I spoke with representatives from organizations specializing in everything from ancient Greece to the Holocaust, collecting names of dozens of history fellows and the titles of their various research projects, each of which examined a unique historical question. While I knew historical study covered this range of topics, it had not previously dawned on me how people in the same discipline could discuss topics as different as, say, Ashkelon under the rule of Alexander the Great and the soybean in international perspective. Nor had I previously thought about history as a profession involving office work and administration, yet it does. Shortly after beginning the project, I had put together a list of over 70 history fellows working in the DC area and their projects, which became the National History Center’s Local History Fellows page.

As the semester continued, I worked on a series of other projects, including the congressional briefing “Ebola and the African Healthcare Crisis,” for which I created both a web page and handout summarizing the main points. (Incidentally, helping to organize a congressional briefing provides an excellent anecdote for one-upping your relatives during Thanksgiving dinner.) Not only did I come away with a great conversation piece, but I also picked up some new computer skills while helping to prepare for the briefing. As I mentioned before, I came into this internship without very much previous experience, so I had to learn office processes from scratch, including mail merging, web editing, and most recently, basic coding. As a liberal arts student interning at a history-based institution, I certainly hadn’t expected to pick up any coding skills while I was here. While I won’t be doing intensive programming anytime soon, I can now say that I have an understanding of what’s going on. 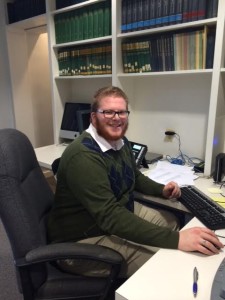 Over the past few months interning at the National History Center, I have learned the behind the scenes basics of the historical profession, gained office skills I previously didn’t even know existed, and attended a congressional briefing on the Ukraine crisis, hosted by the center earlier this year. Whatever I move on to next, I know that my time at the center will continue to be in my mind. At the George Washington University, we have a saying we like to throw around to describe the opportunities available to students on campus: #onlyatGW. This past year interning at the National History Center has given me another saying: #onlyattheNHC.

Zack Toland is a sophomore at the George Washington University, originally from Allentown, Pennsylvania. He has been interning at the National History Center during the 2014–15 academic year, and is currently majoring in history.