Joseph Locke and Ben Wright wrote the article “A Free and Open Alternative to Traditional History Textbooks” for the March issue of Perspectives on History. AHA staff Shatha Almutawa and Stephanie Kingsley talked to Joe and Ben about their open textbook project, The American Yawp. Joe is a historian of modern America, and Ben is a historian of America and the Atlantic world.

How did you decide which topics would be covered in the American Yawp?

Joe: We began by thinking about what we emphasize in our own American history surveys. We talked to each other and folks we know in the field. From there we started plotting out what specific topics we’d talk about. We tried to find scholars who are active in these fields, who had expertise in these eras. We laid these topics out and connected them to scholars.

Ben: We wanted our first draft to come from scholars conducting active research in exactly that topic. For example, in our chapter on the Old South, we targeted authors of recent articles in the field. We looked at the JAH, AHR, Journal of Southern History, Slavery and Abolition, and more. Then we looked for authors of recent book reviews and historiographical essays, recent dissertations, and the roster of large graduate programs with a strength in the history of the Old South. For that chapter, we had 21 excerpts, ranging from 300 to 1000 words, on topics that would be as specific as “The Irish in the Old South” to the larger ones: “Urban Life in the Old South,” and the “Economics of Cotton.”

What did the editorial process involve?

Joe: From these 300 contributors, we recruited 27 chapter editors. We went to our chapter editors and said, “We don’t want this to read like an encyclopedia.” We wanted it to read like a narrative history. We asked the editors to take these 21 entries, for instance, and stitch them together, make one coherent chapter, with a relatively coherent voice. From there, Ben and I did what we could to even out the prose across the 30 chapters.

Ben:Now, we’re engaged in this broader review process where we’re opening it up to users, editors, and contributors, paragraph by paragraph, to make comments on the different paragraphs, or propose changes, and then go back and work with the editors and contributors to create a refined version of the text.

What kind of a timeline are you on for that?

Joe: Our goal is is to have a more formal polished draft ready by the fall semester. We want to make sure the material is in great shape.

Ben: There’s definitely room for improvement, and we are still eager to receive feedback in the next few months before we begin our revisions this summer. 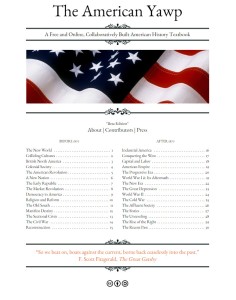 What questions went into the visual design?

Joe: We wanted pure simplicity; we didn’t want to clutter the text up with anything that would distract from it. The fundamental format is simple: you enter the table of contents, then a long page only broken up with images. We wanted to strip down the presentation and get something completely user-friendly, totally intuitive, and non-distracting.

Who chose the images?

Ben: Whitney Stewart, a grad student at Rice, chose most of the images. She focuses on visual and material culture and worked to find images that would supplement the content of the text, rather than simply serve as decoration. Joe and I supplemented the list that she came up with as well.

We strove for variety in the images and tried to draw on different kinds of materials. We hope that this illustrates the variety of visual sources historians use as well as creates a more interesting reading experience.

What are the challenges unique to this sort of project?

Ben: What are the challenges? It’s really hard to write synthetically. It goes against most of our training. We are taught to nurture complexity, often at the expense of accessibility. Writing synthetically and accessibly is tremendously difficult.

Are you still getting comments?

Joe: They are still coming in. We got quite a bit four days ago. A couple more the day before that. The comments range from finding typos to questions or thoughts on the big interpretive questions. We got some chapters with vibrant conversation and some of them with very little, which is either a good sign or a bad sign.

What would be an example of a chapter where you had a lot of debate?

We got great feedback on the “Colonial Society” chapter. Not only from our contributors but from our editorial advisors. All were really helpful. “British North America” was a little bit more vibrant. Not only contributors but senior figures in the field.

We read the “Old South” chapter and noticed that it focused on slavery. Why?

Ben: I am comfortable saying the vast majority of scholarship on the Old South centers on the institution of slavery, because it’s at the center of the institutions of the South. Most white southerners did not own slaves, but that doesn’t mean they were not implicated. If you wanted to make a synthetic chapter on life in the Old South, slavery is the most important theme to emphasize. Maybe we’ll nuance that a bit, but if you had to choose one narrative, then it has to be slavery.

Were there big ideological or thematic concerns raised that you think you’ll build on?

Ben: Jim Merril is pushing really hard in terms of the way we talk about Native American history. So much of the narration we slip into is Anglo-centric in perspective. This shows up in subtle ways with language. We were grateful to have his comments on that.

Joe: Something I’ve seen again and again is that question of perspective.

Ben: That’s the hard thing. Where are your geographic or chornological boundaries? All boundaries are somewhat artificial, but these artificial boundaries end up being very meaningful in terms of how students learn. They will go a long way in shaping the narrative.

Joe: That’s the fundamental question. How do you boil all of American history down to 300,000 words?

Ben: We try to mirror historiographical debate and follow the questions and answers that the profession has chosen to emphasize. We encouraged our editors to do that as well. We would tell them, “Think Hemmingway, not Dickens…. Be illustrative, not didactic.” People kept asking about our narrative hook. Really, we just wanted our narrative to come from scholarly trends.

Using The American Yawp in the Classroom

Are you using the textbook in your courses this semester?

Ben: I’m using it as a textbook at the core of my class.

Joe: I use it more as a supplement. I refer students to sections, but it’s in the background.

Ben: We like the fact that because it’s free and online, it’s more flexible. People are using it in all sorts of ways. Neither of us were using a textbook before, but we thought it would be nice to have a synthetic safety net for students who requested one. So yes, a lot of folks are using it as a core textbook. Some are referring students to specific chapters. Others are doing innovative things.

On the first day of class, when I told the students the textbook was free, I had one student cry. Textbook prices are really a problem. Joe and I both teach at institutions where students come from non-affluent backgrounds, and the opportunity to take a course without shelling out $300 in book costs… that’s a big deal. This is why we wanted to do this project.

How have students responded to the textbook?

Ben: Once we refine the content, we plan to put citations back in. Some of our contributors gave us footnotes, and some didn’t. It got to the point where we decided not to have them in the initial edition.

Joe: We also want to include primary sources so you can do reading on the side. That’s the kind of thing we want to do as soon as we refine the text.

Ben: We will add primary sources, but we want to protect the experience of reading narrative. We do not want to overburden students with a barrage of hyperlinks or break out discussions that would take away from narrative.

What is the significance of the title, “The American Yawp”?

Joe: It’s drawn from Walt Whitman’s Song of Myself. Textbooks often struggle to find a theme and in Whitman’s words, we found one we could work with:  “I too am not a bit tamed—I too am untranslatable. I sound my barbaric yawp over the roofs of the world.”