Cheers erupted in the packed room as soon as Amy Cooper Cary (Marquette Univ.) said the words that had been a long time in coming: “The council endorsed the Protocols for Native American Archival Materials.” For the Native American Archive Section of the Society of American Archivists (SAA), gathered in Washington, DC, for the society’s annual meeting this August, the SAA council member’s announcement was a welcome development. 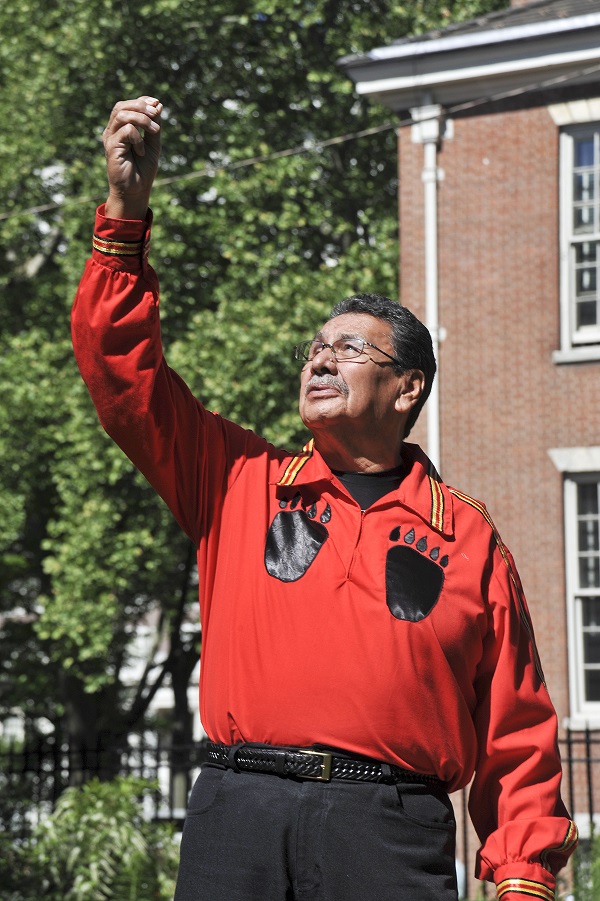 Larry Aitken, tribal historian of the Leech Lake Band of Ojibwe, performs a pipe ceremony at the American Philosophical Society to mark the opening of a conference. Aitken helped the society adapt and implement the Protocols for Native American Archival Materials. Frank Margeson/APS

“This is a very important moment for our section,” said its chair, Ricardo L. Punzalan (Univ. of Maryland). Intended “to guide libraries and archives in engaging in culturally responsive care of Native American archival material and in providing culturally appropriate service to communities,” the protocols originated in 2006 at a convening of 19 archivists, librarians, museum professionals, and scholars. The group, 15 of them Native American, First Nation, or Aboriginal, gathered in Flagstaff, Arizona, for a conversation about best practices for the management and care of Native American archival materials held at non-tribal repositories. The group was convened by Karen J. Underhill, the head of the Special Collections and Archives at the Northern Arizona University Cline Library at the time, now retired.

Underhill’s introduction to the issue came in the early 1990s, when Leigh Kuwanwisiwma of the Hopi Cultural Preservation Office approached the Cline Library to ask it to stop providing reproductions of images of the Hopi snake dance to researchers. For the Cline Library staff, and for Underhill, the conversation was life-changing.

As Jennifer O’Neal (Univ. of Oregon), a historian, archivist, and member of the Confederate Tribes of Grand Ronde in Oregon, explains, many Native American archives and collections are geographically far from the communities that the materials come from or document. Very few non-tribal institutions holding Native American archival materials have formal or ongoing relationships with the source communities. As she says, “Many of these collections had come into these repositories through no knowledge of the tribal communities, taken them far from the tribal communities . . . and also usually without consent of those communities.” “The knowledge embedded in those materials,” as Punzalan explains, can be very important to the communities. “They need it for establishing sovereignty over land, managing natural resources, relearning endangered languages, kids in school learning traditional lifeways, you name it.”

“Many of these collections had come into these repositories through no knowledge of the tribal communities . . . and also usually without consent of those communities.”

As Underhill became more attuned to these problems, she attended a panel at the SAA on the Aboriginal and Torres Strait Islander Protocols for Libraries, Archives, and Information Services, published in 1995 by the Australian Library and Information Association. Those protocols recognized the Aboriginal and Torres Strait Islander peoples “as the owners of their knowledge,” and addressed issues of how they were represented in libraries and archives, as well as the barriers they faced in accessing information about their communities at these institutions. The protocols called on libraries and archives to involve Aboriginal and Torres Strait Islander peoples in the “governance, management, and operation” of their institutions. The presentation stayed with her: “I just thought, wow, look what they’re doing in Australia. Why can’t we do that here?”

In 2006, Underhill took action. She wrote grant proposals and soon brought together the group—now known as the First Archivist Circle—to sit together for three snowy days and discuss how archives and libraries could honor traditional indigenous knowledge and collaborate with indigenous communities. (O’Neal was part of the group.) Adopting much of the language from the Australian protocols (with permission), the group produced a document called the Protocols for Native American Archival Materials.

Recognizing that “Native American communities are sovereign governments,” the protocols outline “opportunities” for “non-tribal institutions which hold American Indian archival material” to improve existing relationships or to develop new ones with the communities represented in that material. The protocols encourage institutions to consult with native communities about access to and use of culturally sensitive materials and ask for reciprocal education, training, and information sharing, including repatriation of materials, should communities deem it necessary.

Protocols in hand, says O’Neal, members of the group “began to take them out to various organizations for their implementation or endorsement.” For its part, the SAA, the largest professional organization in the United States for archivists, created a task force to seek its members’ opinions on the protocols. But the resulting report exposed deep divides in the SAA.

The chair of the SAA’s Reference, Access, and Outreach Section, for example, expressed concern that implementation of the protocols would “have a chilling effect on repositories’ willingness to acquire Native American holdings.” Many members saw the protocols’ call for institutions to begin relationships with native communities, to establish co-custody or shared stewardship of materials, as cost-prohibitive and onerous. Others challenged the protocols’ core premise—that native nations are sovereign governments. Some archivists argued that indigenous communities are “dependent” legal entities with no laws or rights that US archival institutions could be asked to respect.

O’Neal was involved with the Native American Archive Section and the endorsement efforts at the SAA. She says some members were concerned that the protocols were “calling into question many foundational principles of archives and archival management.” The call to return unethically acquired materials to their source communities, she says, “upset” many people. As Punzalan put it, there was an “epistemological clash” between two types of knowledge systems within the SAA: a Western notion of archival management that seeks to provide researchers with mostly unrestricted access to materials, versus an indigenous view that some knowledge deserves protection and restriction based on a community’s history, tradition, and culture.

After the 2008 task force report, the SAA decided to continue dialogue about the protocols in lieu of endorsing them. It held forums at its annual meetings from 2009 to 2011, after which the issue dropped from its council’s agenda. O’Neal, who had been involved in the forums and wrote the final report on the 2011 meeting, decided to take her energies elsewhere. It was very “unhealthy,” she says, “to have to continually defend your traditional ways, your ethics, and protocols that should be followed for your collections. And we did that for five or six years.”

In 2007, a group of indigenous archival professionals who’d come together to create the National Conference of Tribal Archives, Libraries, and Museums—the predecessor of the Association of Tribal Archives, Libraries, and Museums (ATALM)—endorsed the protocols. Individual libraries and archives around the country took note and began changing their policies and procedures regarding the management of their Native American holdings—including the Cline Library, the National Anthropological Archives, the National Museum of the American Indian, the American Folklife Center at the Library of Congress, and the American Philosophical Society (APS) Library.

The protocols encourage institutions to consult with native communities about access to and use of culturally sensitive materials and ask for reciprocal education, training, and information sharing.

The APS, which created its own protocols based on the Protocols for Native American Archival Materials, now works with over 80 indigenous communities to identify culturally sensitive materials, develop best practices regarding accessibility and use, and share knowledge about existing collections. For example, when library staff couldn’t determine whether materials from the Eastern Band of Cherokee written in Cherokee syllabary were culturally sensitive or not, they worked with the tribe’s Cultural Resources Department to convene a group of elders with authority within the community to evaluate sources. Researchers can view culturally sensitive materials on site but must request permission to copy them or reproduce them in their own work. Since implementing the protocols, the APS has seen an increase in the number of users from indigenous communities requesting materials from its collections. Adopting the protocols, says Brian Carpenter, curator of Native American materials at the APS, helped the library refocus its attention away from native peoples as “subject matter” and toward constituents and researchers.

Similarly, at Washington State University (WSU), a team of scholars collaborated with local indigenous communities to create Mukurtu, a content management system that allows indigenous communities to control access to their digital cultural heritage. Mindful of the protocols’ ethos of respect and trust for indigenous knowledge, the system was used to build the Plateau Peoples’ Web Portal, a collaboration between more than half a dozen native tribes and WSU.

Considering the protocols’ influence since 2006, O’Neal says that while she appreciates the SAA’s 2018 endorsement, it shows how “far behind the organization is in doing this work.” For Punzalan, however, the endorsement is a meaningful “symbolic gesture.” “This is the professional league of archivists,” he says, and the document will serve as “an important guidance for our membership.” Both were gratified by the apology that accompanied the SAA’s endorsement. The SAA council acknowledged, “Many of the original criticisms of the Protocols were based in the language of cultural insensitivity and white supremacy,” and regretted that the “SAA did not take action to endorse the Protocols sooner and engage in more appropriate discussion.”

Punzalan hopes that the SAA’s endorsement will result in tangible changes at institutions that hold archival materials. “You always hear this a lot from people: ‘I abide by the spirit of the protocols,’” he says. “But I think that’s easier said than done sometimes.” The success of the protocols at institutions such as the APS, Punzalan says, shows that implementation is possible. The protocols bring together indigenous communities, archival institutions, archivists, and researchers. “And in the long run,” he says, “I think that’s beneficial.”