The Jefferson County Showdown over the Advanced Placement US History Test: A Second Chance for a Failed Dialogue 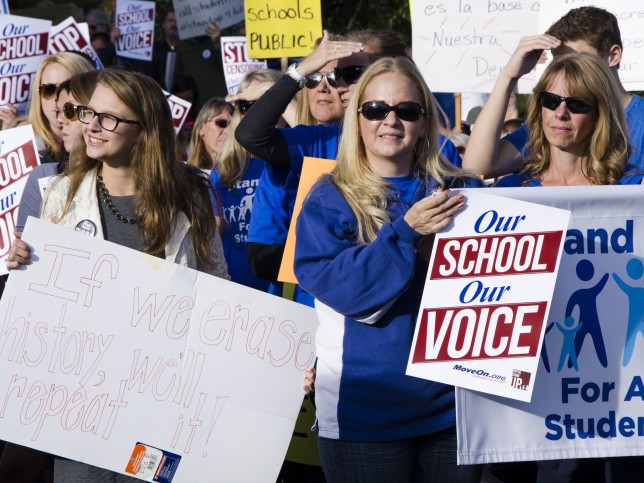 In fall 2014, just two short years ago, it seemed to historians and history teachers in Colorado that our state had traveled through Alice’s looking glass. Rather than debating legalized marijuana or even the latest Broncos game, Coloradoans debated US history and K–12 US history curricula. Local news outlets sought out the opinions of history teachers, and national media reported breathlessly on the showdown. Most surprisingly, hundreds of high school students took to the streets to protest perceived censorship in their history classes. In the end, the conflict led to the recall of three county school board members in the second-largest school district in the state. Colorado dominated the news cycle, and, bizarrely, all of it was in relation to the topic of teaching US history.

What was the argument about? Jefferson County, a relatively large, mostly suburban county on Denver’s western border, elected a group of conservative activists to its school board in 2013. The activists adopted a multi­faceted approach to change their school district, from initiating a pay system that would allocate raises to teachers’ salaries based on performance to bailing out two failing charter schools. They also sought to control curriculum, on the alert for any changes they perceived as overtly leftist. In their view, such a change arrived when the College Board released a new curriculum framework for the Advanced Placement course in United States history (APUSH).

Thousands of high schools throughout the nation offer an Advanced Placement (AP) US history course, and in 2015 more than 460,000 students took the AP US history exam. The test is written and administered by the College Board, which also creates course outlines, teaching materials, and professional development programs for teachers that all draw from the overarching AP US history framework. According to Lawrence Charap, senior director of AP Curriculum, Instruction, and Assessment, the College Board decided in the middle of the last decade that the framework and exam needed to be updated. The impetus to make the change came from teachers, university professors, and parents who complained that the course and test “encouraged shallow learning, as teachers and students raced to cover every possible topic that could appear on the exam.”1 The new framework added more depth and structure than the previous guidelines and, significantly, focused the AP course more on historical thinking than on rote memorization.

Yet from the point of view of the conservative school board members, the new APUSH framework represented a politically unacceptable change in course material. One of these members, Julie Williams, proposed a board resolution questioning the AP framework and stated: “Materials should promote citizenship, patriotism, essentials and benefits of the free enterprise system, respect for authority and respect for individual rights. Materials should not encourage or condone civil disorder, social strife or disregard of the law. Instructional materials should present positive aspects of the United States and its heritage.” Williams believed that the new AP framework did not meet her criteria because it “rejected the US History that has been taught for generations.”3 Unsurprisingly, this statement set off a firestorm of controversy and protests. Conservative activists throughout the nation entered the fray, lambasting the framework as a tool of political correctness run amok. The controversy went viral, preventing any possible reasoned discussion on the topic.

Two years later, as the nation’s historians and history teachers gather in Denver for the AHA annual meeting, a roundtable titled "The Jefferson County Showdown over the Advanced Placement US History Test: A Second Chance for a Failed Dialogue” will revisit the conflict and ask what we can learn from it. To be held on Saturday, January 7, 2017, from 3:30 to 5:00 pm, the roundtable will be moderated by Patricia Limerick, director of the Center of the American West at the University of Colorado and, significantly, newly minted official state historian for Colorado. As the title of the roundtable suggests, the goal for the discussion will not be to replay the political debates of two years ago. Instead, it will be to move beyond partisan bickering and toward a new dialogue.

The historical profession has done very little since 2014 to grapple with the central issues of the controversy from the standpoint of teaching history, and that is what this panel intends to do. The new framework symbolizes a changing landscape in history education. Critics of the framework have focused on allegedly “left wing” content. Yet the framework might be most notable for its new approach to the intersection of pedagogy and content, which is of tremendous importance to the community of historians.

After all, the impact of the controversy over the new framework extends beyond history as taught in high schools. Due to the ubiquity of the APUSH class, debate over the AP framework also has repercussions for historians and history teachers at the university level. Most universities provide some form of credit for a “passing” score on the APUSH exam, which means that university students throughout the nation receive part of their university education in the APUSH course. And, of course, the intent of the APUSH class is to mirror the traditional US history course taught in universities and community colleges.

Roundtable participants will historicize the teaching of the US history survey by moving beyond presentist political partisanship.

Therefore, our panel will focus less on the political fallout from the Jefferson County protests and more on context and educational implications. We will attempt to move beyond specific political controversies of today and toward a discussion of thorny issues related to the broader context of the teaching of US history, challenging the problematic characterization of history as “conservative” or “liberal.” This will be a central issue for the entire panel, but especially for Brad and Dedra Birzer, two respected historians who teach at the legendarily conservative Hillsdale College. All of the roundtable participants intend to historicize the teaching of the US history survey by moving beyond presentist political partisanship in order to learn more about the role of this course in society.

More broadly, the roundtable will use the issue of the Jefferson County conflict to analyze the new push for significant changes in the teaching of the US history survey. The members of the roundtable are uniquely qualified to spark such a discussion. James Sabanthe, teacher at Hononegah Community High School in Rockton, Illinois, and co-chair of the College Board APUSH development committee, will provide insight on the creation of the framework, while Stephanie Rossi, AP American history teacher from Wheat Ridge High School in Jefferson County, will discuss her work in implementing the framework in the midst of the controversy. Jonathan Chu, professor of history at the University of Massachusetts Boston, is the chief reader for the APUSH exam and will discuss the relationship between the framework, the AP test, and larger changes in the teaching of US history on a national level. All of the roundtable participants, then, are intimately connected to and cognizant of changes in teaching and learning in the US history survey course, particularly the shift in focus over the last 20 years from encouraging memorization of facts to developing historical­-thinking skills.

For university historians, such changes fit under the umbrella of the Tuning project, a major AHA initiative for the past half-decade. For secondary school teachers, similar ideas serve as the centerpiece of the C3 Framework, a newly published set of guidelines for teaching K–12 social studies, supported by the AHA and other major historical organizations, including the World History Association and the National Council for History Education. The creators of the new APUSH framework explicitly focused on the same ideas that are central to Tuning and the C3 Framework. All of these changes put the teaching of US history in a new place in the national political and educational terrain.

Yet what are the implications of these ideas for the teaching of survey courses in US history, be they university-level courses, AP courses, community college courses, or even college equivalency courses taught to high school–age students? Are these ideas politicized in ways that make some teachers and some members of the public uncomfortable? Can AHA members devise a more productive way for society to consider these matters? The Jefferson County conflict brought a series of important questions to the national consciousness, but failed to create a dialogue leading to solutions. Our roundtable seeks to begin such a conversation. We have chosen the roundtable format explicitly to engage the audience in deep discussion and dialogue, rather than merely presenting our own opinions on the subject. We hope to see you all in Denver for a vigorous and thought-­provoking discussion of the Jefferson County history “war” and its implications for the historical profession.

Fritz Fischer, professor of history and director of history education at the University of Northern Colorado, teaches courses in American history and directs the secondary school history teacher preparation program. He is chair emeritus of the National Council for History Education and author of The Memory Hole: The US History Curriculum Under Siege (2014).