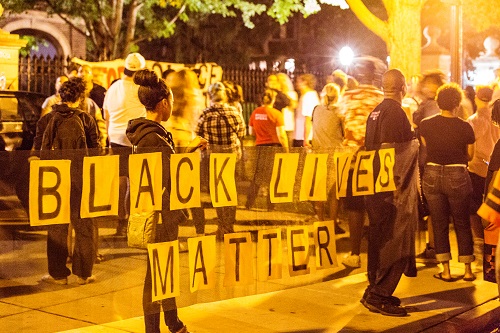 At a time when the CIA invests in companies that develop surveillance technologies for social media, archivists like Bergis Jules face disconcerting challenges. An archivist at the University of California, Riverside, Jules is also community lead on Documenting the Now (DocNow). This digital project brings together archivists, academics, and activists to create ethical standards for the archiving of tweets related to the Black Lives Matter and other social justice movements, so the matter of surveillance is not just a theoretical concern. For those involved in DocNow, the possibility that their archival efforts will be used in police surveillance is an ethical matter they must confront. Archivists, Jules says, must actively think about “how . . . the collections with social media content that we build might support law enforcement activity that targets groups of people they don’t agree with—for example, activists.”

Surveillance is only one concern of archivists who build digital collections. The availability of digital records has proved a boon for historians (for example, by reducing costs and overcoming distance), but for archivists, the ease of access that digitization brings also provokes a host of ethical concerns about what to digitize and how to do it. Some questions, such as those of gaining consent from content creators before displaying materials online or ensuring that materials are presented in their appropriate context in the digital realm, are reiterations of old problems. Others, such as those of online surveillance and digital privacy, are very much the products of the 21st century. As archivists forge practices for ethical online behavior, some are discovering new uses of digital technology that can rectify injustices associated with historic collection and archiving practices.

Michelle Caswell, who teaches archival theory at UCLA and cofounded the South Asian American Digital Archive, advises archivists to consider “whether the record creators and subjects of those records would consent to having them available digitally.” While archivists typically seek consent to make materials publicly available for historical research, what makes the issue thornier in the case of digital collections is the expansion of the meaning of “the public.” According to Caswell, it is one thing for a record to be available publicly in a repository, at which a researcher has to physically show up and request materials, and another for it to be searchable and discoverable by anyone in the world with an Internet connection. As Jules points out, creating a digital archive essentially creates a collection of digital data, which researchers can mine in ways that go well beyond what is possible with physical collections.

To address these issues, some archivists seek to explicitly gather consent from content creators before placing it online, and in doing so, they go above and beyond what is required of them under copyright law. In other instances, explains Cathy Moran Hajo, director of the Jane Addams Papers Project at Ramapo College, material might be posted online but with redacted personal information. Take-down policies also allow users to request removal of objectionable materials. As a demonstration of how seriously it takes matters of consent, DocNow is working to create a system that would allow Twitter users to opt out of having their tweets archived, though they are publicly available.

Another ethical concern that goes hand in hand with consent is that of context—ensuring that digital materials presented online are not isolated from the circumstances in which they were created. For DocNow, that means recognizing and documenting the offline activism that made social media hashtag campaigns such as #BlackLivesMatter possible. In order to do this, DocNow is actively engaging with community activists to learn how they want their online activism to be remembered and archived.

Instead of using an existing digital archival system and then working within its constraints, DocNow is letting ethical concerns drive its creation of technology. It isn’t alone. An increasing number of archivists and scholars are now using digital tools and technology to confront ethical issues that have historically plagued collection and archiving practices. At the forefront of these efforts are archivists working with indigenous peoples and collections. As Kim Christen Withey (Washington State Univ.) put it in a recent panel discussion at the Library of Congress, “The history of collection is the history of colonialism.” Indigenous peoples rarely hold copyright to materials related to their cultural or ancestral heritage held at libraries and archives around the world, and as Caswell explains, many of these records “were created without the consent of the indigenous communities” and “contain sacred information that was never meant to be distributed on a wider basis.” In response, many libraries, archives, and museums are not only rethinking the widely accepted ethos of “open access” in the archival world; they are also moving to a collaborative approach, working with indigenous communities to obtain permissions and to gather contextual information or create metadata.

One of the most forward-thinking and innovative of these collaborative approaches is an online content management system named Mukurtu. Managed by the Center for Digital Scholarship and Curation at Washington State University and directed by Withey, Mukurtu offers a platform that allows indigenous communities to digitally archive their heritage and knowledge, granting access to some users while restricting it to others. For example, using Mukurtu, an indigenous community can determine whether an image of a sacred object should be available publicly or only to a few registered users. An extension of Mukurtu is the Traditional Knowledge (TK) labels tool, which allows universities and libraries to add labels to digital materials to add context and indicate an indigenous community’s preference for how researchers should view and use cultural materials. The Library of Congress plans to use the TK labels as part of its forthcoming digital collection of original wax cylinder recordings from the Passamaquoddy people made in 1890 by anthropologist Jesse Walter Fewkes.

For historians, consideration of ethical concerns surrounding consent, context, and access could mean shouldering some of the responsibility of ensuring ethical use of archival materials, whether traditional or born-digital. Researchers might need to weigh whether a particular archival material is ethical for them to use, keeping in mind that most research now ends up online. Hajo recalls that archivists working on the Margaret Sanger Papers Project redacted the name of a woman who received an abortion in a birth control clinic from microfilmed records, but a scholar using the physical papers published the woman’s name, causing it to appear on Google Books. Thus, even when something is publicly available, like a tweet, scholars might need to make ethical choices about using and presenting that information. Philippa Levine, vice president of the AHA’s Professional Division, says that historians should indeed consider these questions as they navigate the new avenues of research opened up by digital holdings. Jules also encourages historians to get involved in the process of creating digital collections and in discussions of ethical concerns. “Be part of the conversation,” he says.

The stakes are undoubtedly high. In September 2016, the Baltimore Sun reported that its police force had used the service Geofeedia, which analyzes social media information “to monitor protests, parades, and holiday celebrations.” In October, the American Civil Liberties Union released a report noting that the use of such software was more widespread than previously thought. Ensuring that archivists and historians do not become complicit in the marginalization of vulnerable populations because of their online practices is certainly an ethical conversation worth having.

Kritika Agarwal is associate editor, publications, at the AHA. She tweets @kritikaldesi.