Yovanna Pineda is an associate professor at the University of Central Florida. She lives in Orlando, Florida, and has been a member since 1999. 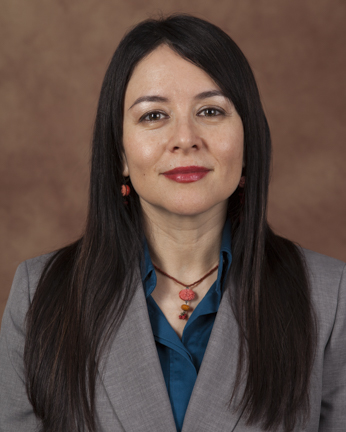 Describe your career path. What led you to where you are today?
My journey began about 25 years ago, at the end of my undergraduate years at UCLA. I was a first-generation college student paying my own way, working three jobs at one time for most of my college career. My first few years were hectic, so I hardly gave thought as to what would come next. But one of my favorite jobs, one in which the hours would pass quickly because it permitted me to ponder and write, was as an undergraduate research assistant for a Latin American studies professor, Linda Rodriguez . At the time, I was doing basic note taking, online searching on a DOS platform, and bibliographical work. Reading microfilm of historical documents and touching old books was stimulating—it felt like an unexplored world was opening up to me. The professor noticed my enthusiasm, telling me I was a “natural” in my research skills. Because I came from a long line of factory workers, I thought I would be an industrial production manager. I had not thought about being a professor until that moment, but the fit felt natural, hence, within a year I was applying to graduate schools in history.

I have been fortunate that my career path has been relatively smooth. I stayed at UCLA for graduate school, earned my first job as an assistant professor while still an ABD, and landed my second position, where I currently work as an associate professor, several years later. Of course, along the way, I encountered personal and professional challenges, but I have survived tough times by relying on my working-class ethic of using work as a solace.

What do you like the most about where you live and work?
The annual announcement that a hurricane is coming our way! It has not hit Orlando but it is a constant reminder not to take anything for granted in life.

What projects are you currently working on?
This 2016–17 academic year I am on sabbatical so I can finish, or make significant progress on, three interrelated projects that I have been developing since 2012. I am working on my second book, Harvesting Technology: Farm Machinery Use, Invention, and Memory in Argentina; a companion historical documentary film, The Birthplace of the Harvester; and a digital database of 60,000 invention patents.

In Harvesting Technology, my approach is to shift the focus of histories of technology away from great inventors and to the users of the machinery. I want to know which technologies mattered most to farmers. I examine how 19th-century Argentine farmers and blacksmiths tinkered with transferred farm technologies from the United Kingdom and the United States to the point that, by the early 20th century, they began inventing their own farm machinery designs and methods. Drawing on invention patents, the archives of family-owned factories, and over 50 oral histories of the men and women involved in creating and working domestic farm machinery, I demonstrate that Argentine inventors and manufacturers designed their machinery first and foremost for practical local use, but by the mid-20th century, they produced farm machinery that would be exported to farm fields well beyond the Argentine Pampas, including in Brazil, Venezuela, and the former Soviet bloc nations.

In 2012, I began to create an invention patent database of Argentina from 1866–1940 for my book project. The number of patents grew to 60,000 patents and became too unwieldy to analyze using simple programs such as MS Excel and MS Access. This year, I started to work with a computer programmer to write a script for network analysis and georeferencing.

Together the book, documentary film, and database reveal a little-known history about Argentina’s contributions to farm machinery and the global impact of those inventions in the 20th century.

Have your interests evolved since graduation? If so, how?
My fascination is still with technology and its impact on history and economic growth, but now I have a strong interest in artifacts and tangible items of everyday life. My first book was a macroeconomic history of large manufacturing companies. This second project complements the first by taking the large, macroeconomic view and focusing down on the everyday, lived experience of Argentina’s economy.

What’s the most fascinating thing you’ve ever found at the archives or while doing research?
The best part of spending all that time in archives is when you have that special moment of discovery, when you make a new connection among all the evidence, and have something no one has ever appreciated or spoken about, such as when I sifted through hundreds of hand-drawn patented designs of farm machinery. It completely changed my perspective, and brought me closer to understanding David Edgerton’s thesis on the use of technologies. As he states, most studies focus on the big inventions or improvements, such as gas-powered motors and large tractors, but the design of a plow or animal-powered harvester, a more used item, is perhaps more important than a large gas-powered tractor that will eventually break down and collect dust in the countryside.

Is there an article, book, movie, blog etc. that you could recommend to fellow AHA members?My book recommendation would be Berg and Seeber, The Slow Professor: Challenging the Culture of Speed in the Academy. I know no one has time to read it, and that is why you should read it! When it comes out, please see Birthplace of the Harvester!

Why is membership in the AHA important to you?
I like the annual meetings, attending the talks, listening to different perspectives, as well as going to the meetings that discuss new initiatives for the profession.

Do you have a favorite AHA annual meeting anecdote you would like to share?
I am a frequent and regular conference attendee, so there are many moments that stand out to me. But hearing Vicki Ruiz speak as president of the AHA at the 2016 annual meeting was momentous to me as a Latina because she gave us visibility and voice. It was also the first time I saw that many Latina historians in one room at any AHA function. Since 2001, I have been the only Latina in my department or program whether I was a visiting, assistant, or associate professor. Imagine feeling like the only one of your kind in a profession, but at that moment I felt like I had finally found my tribe.