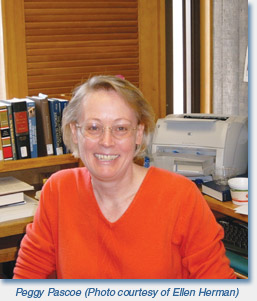 Peggy Pascoe, the Beekman Professor of Northwest and Pacific History and professor of ethnic studies at the University of Oregon, died at home in Eugene, Oregon, on July 23, 2010. She leaves behind an exceptional professional legacy, not only in her prize-winning scholarship on women and multicultural relations in the West, but also through the careers of the students and colleagues she mentored over the decades.

Born in Butte, Montana, in 1954, Peggy Pascoe received a BA in history from Montana State University (1977), which later named her one of the school’s 100 most outstanding graduates. She entered the women’s history program at Sarah Lawrence College, studying with Gerda Lerner, and earned her MA degree in 1980. That year she began the doctoral program in U.S. history at Stanford, where I had the great fortune to serve as her advisor and then to become her colleague and friend. Her cohort—which included David Gutierrez, Valerie Matsumoto, and Vicki Ruiz—pioneered a multicultural and gendered history of the West. Pascoe’s revised dissertation, Relations of Rescue: The Search for Female Moral Authority in the American West, 1874–1939 (Oxford University Press, 1993), set a high standard for these fields. Through careful case studies of female missionary campaigns throughout the West, she explored the ways that white Protestant women attempted to uplift Native American, Asian American, working class, and Mormon women. Her balanced and subtle interpretation both credited the opportunities to challenge patriarchy and exposed the ways these efforts reinforced racial hierarchies.

After receiving her PhD in 1986, Peggy Pascoe began her teaching career at the University of Utah, where she won a University Distinguished Teaching Award. She moved to Oregon in 1996, along with her life partner, Linda Long. In the courses Pascoe taught in history and ethnic studies, she always made race and gender central. She described her interests to students on her university web page: “I’m fascinated by the cultural and historical processes that make race, gender, and sexuality seem like ‘natural,’ common-sense differences rather than the power-laden hierarchies they really were (and are).” In 2009 she received the Martin Luther King Jr. Award for fostering diversity at the University of Oregon.

Her teaching interests reflected the direction of her research. Beginning in the 1990s Pascoe investigated the history of interracial marriage in the American West, later broadening her scope to map shifting racial ideologies throughout the nation through the lens of debates over “miscegenation.” Her skillful readings of court cases and laws provided the basis for several pathbreaking articles that foreshadowed the impact her new work would have. “Race, Gender, and Intercultural Relations: The Case of Interracial Marriage” (Frontiers, 1991) won the Jensen-Miller Prize in 1991, and “Miscegenation Law, Court Cases and Ideologies of ‘Race’ in 20th-Century America” (Journal of American History, 1996) won the America: History and Life Prize in 1997.

Pascoe was part way through the manuscript for her book on miscegenation law when she learned in 2005 that she had ovarian cancer. Initially she did not think that she would be able to complete the study. In 2007, at a panel held in her honor at the annual meeting of the Organization of American Historians, several colleagues commented on her draft chapters, which helped inspire her to go back to work on the book even as she endured multiple rounds of chemotherapy. The scholarly result was stunning. What Comes Naturally: Miscegenation Law and the Making of Race in America (Oxford, 2009) provides a sweeping and detailed account of the criminalization of interracial marriage and resistance to that process from the 1860s through the 1960s. It is also a superb history of the shifting meaning of “race” in American culture and the ways that gender and race are always mutually constructed. One of the most acclaimed books in U.S. social, cultural, and legal history, it received the Ellis W. Hawley and the Lawrence W. Levine Prizes from the Organization of American Historians; the John H. Dunning Prize and the Joan Kelly Memorial Prize from the American Historical Association; and the J. Willard Hurst Prize from the Law and Society Association.

Peggy Pascoe served her university and the profession generously. In the words of her colleague, Ellen Herman, she was “universally admired” by faculty in history, ethnic studies, women’s and gender studies, “and in all the other units of the university where her calming presence was felt over the years and where both her scholarship and her unmatched diplomatic skills were respected and much appreciated. She was a quintessential professional in the best sense of the word.” For three years she was the co-president of the Coordinating Council for Women in History. In 1996 she co-chaired the Program Committee for the American Studies Association, and in 2003 she was a member of the Program Committee for the American Historical Association. As a co-editor of the American Crossroads Series for the University of California Press she nurtured younger scholars through her careful editing of and support for their books. In addition to shaping the graduate program at Oregon, she mentored graduate students around the country, especially in the field of western women’s history. Her senior colleagues, myself included, also benefitted from her gentle and pointed insights into our work in progress. We realize how much better our future studies would have been had she survived to continue our ongoing conversations about gender, race, ethnicity, and sexuality.

In addition to Linda Long, her partner of 30 years, Peggy Pascoe is survived by their daughters, Ellie Pascoe-Long (age 13) and Joie Pascoe-Long (age 11); her parents; four siblings; and her mother-in-law. A memorial scholarship has been established in her name to support graduate student research. Contributions can be made to the University of Oregon Foundation, 360 E. 10th Ave., Suite 202, Eugene, OR 97401-3273 or online at https://supportuo.uofoundation.org/ with a note designating the Peggy Pascoe Graduate Student Fund in History.