Pasts in Public: Presenting the May Issue of Perspectives on History

The unofficial slogan of the American Historical Association is “Everything has a history.” Introduced by executive director James Grossman in the December 2015 issue of Perspectives, the phrase now appears on staff business cards and, in its hashtag form, has begun to spread on Twitter. As Grossman put it, “Instead of lamenting the decline of public intellectuals, I propose that most historians ought to be capable of functioning in public arenas, ought to be capable of at least reminding our neighbors that everything has a history.” 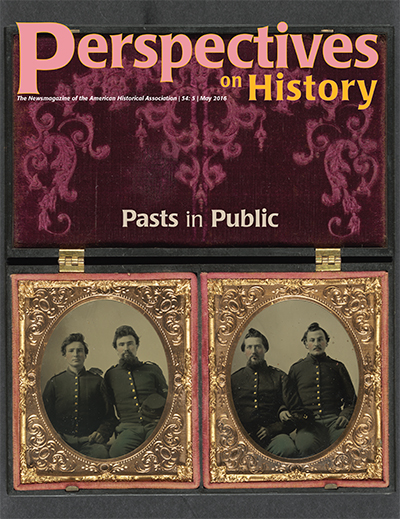 Six months later, it seems that an increasing number of historians truly are engaged in the hard work of intervening in public life, in issues that include mass incarceration, voting rights, immigration, policing, public accommodations, and (of course) a presidential election campaign that has flustered the punditocracy. I don’t mean to attribute the inspiration for these efforts to one Perspectives column. At the very least, however, the mood at the AHA seems to parallel an urgency among its constituency.

This month’s Perspectives and several recent posts on our blog, AHA Today, reflect many ways the discipline can try to clarify or change public thinking on contemporary issues. (As I’ve written before, as much as we may seek to “complicate our understanding” among ourselves, the things we must bring to public life include not only nuance but also directness, persuasiveness, and accuracy.)

In “Captive Histories: The Past and the Public at Andersonville,” Evan A. Kutzler relates his experiences as a seasonal park ranger at Andersonville National Historic Site, located on the grounds of the Confederate prison camp in Georgia where nearly 13,000 perished. Like many historic sites, Kutzler argues, Andersonville’s interpretation of a horrific past is tempered, sometimes for the worse, by the expectations of its visitors and by programs that effectively denude the park’s original potential—as “a place to talk about the human cost of war without romanticizing suffering,” as Kutzler puts it. If you’re concerned about how history gets interpreted on the ground—literally—you won’t want to miss this piece.

In our Viewpoints essay—“Facing Up to the Deplorable Past”—David Lowenthal (author of The Past Is a Foreign Country—Revisited) takes a slightly contrarian tack in analyzing current controversies about monuments to luminaries whose beliefs are today condemnable. Drawing on deep historiographic erudition (from Browne to Macaulay to Lord Acton to the present day), Lowenthal shows that coming to terms with regrettable past events and their commemoration is a problem that has concerned scholars since the 17th century. If this tradition can teach us anything, Lowenthal argues, it’s that we don’t have the power to anticipate which of today’s “honorable” events or personages will prove execrable to future generations. Monuments to the “deplorable past” help us ask productive questions about that past—and about the present, too.

I would also direct your attention to our executive director’s May column, “Again and Again: Historians, Politics, and Public Culture.” Dealing directly with claims about the past that we’ve heard in the presidential election campaign (such as “Make America Great Again,” a claim about the superiority of some unspecified past), James Grossman again urges historians to take the lead in modeling historically informed public engagement, whether in op-eds or in backyard conversations.

Two news articles investigate what we do and don’t know about history in higher education. Julia Brookins’s “The Decline in History Majors: What Is to Be Done?” presents qualitative research about factors that are likely contributing to the nationwide drop in the number of students graduating with majors in history—factors beyond the recession that began in 2008. This piece continues a series of Perspectives articles addressing enrollments, which began in our March 2016 issue. The next, scheduled for our September issue, will present data gathered from the AHA’s departmental survey of enrollments (continuing until June 30).

Finally, Seth Denbo tackles the recently released data from the Survey of Earned Doctorates, gathered yearly by several federal agencies. As more history graduate students complete PhDs only to face a tight job market, this data is especially important to students, faculty, and departments. Though the academic job market implications of the survey seem dire, Denbo points out the survey’s shortcomings and suggests alternative ways of interpreting the data.

There’s a great deal more to Perspectives this month, and I hope you’ll jump right in. I also urge you to vote in the AHA election this year, beginning June 1—a democratic organization runs on the participation of its members. The slate of candidates is here. Watch your e-mail for a link to the ballot.

On a personal note, this issue marks the end of my first year as editor of Perspectives, and it’s been utterly rewarding to try to meet the challenges posed by such an engaged, attentive, and intelligent readership. It’s been an honor to serve you; I look forward to another year after our summer hiatus. And, to descend to the phraseology of clickbait, you won’t believe what we’ve got for the fall.