The Power of Public History

The next time you find yourself in Atlanta (perhaps for our 2016 annual meeting), I encourage you to visit the National Center for Civil and Human Rights. At the museum, take your seat at a replica of the Woolworth’s lunch counter that was the site of pivotal sit-ins in Greensboro, North Carolina, in February 1960. Don the headphones that are provided, and experience a virtual onslaught of racial taunts and threats that rise in volume as the seconds tick by. One leaves the exhibit shaken, with a visceral sense of Jim Crow in the everyday, along with a profound appreciation of those courageous young Americans who took their seats in history. Examples abound of the historical immediacy conveyed in exhibits in museums and national parks and on city streets, to mention just a few venues. As innovators and storytellers, public historians calibrate and transform academic scholarship into experiential journeys for a wide audience.

Although I lack formal training in this vital field, public history has touched my scholarship and teaching at every turn. At times intensely satisfying (though occasionally frustrating), my participation in over 70 projects, including National Park Service (NPS) theme studies, museum exhibits, documentaries, and even an ill-fated history-themed venue in an amusement park, has reinforced my belief that our professional responsibilities extend past the confines of the college campus. Each project took on a life of its own, well beyond the purview of a single consultant—yet another demonstration of how meaningful collaborations are rooted in mutual respect and shared goals. With this idea in mind, I offer a few guidelines—revolving around communication and audience awareness—to consider when we are presented with opportunities for public engagement. 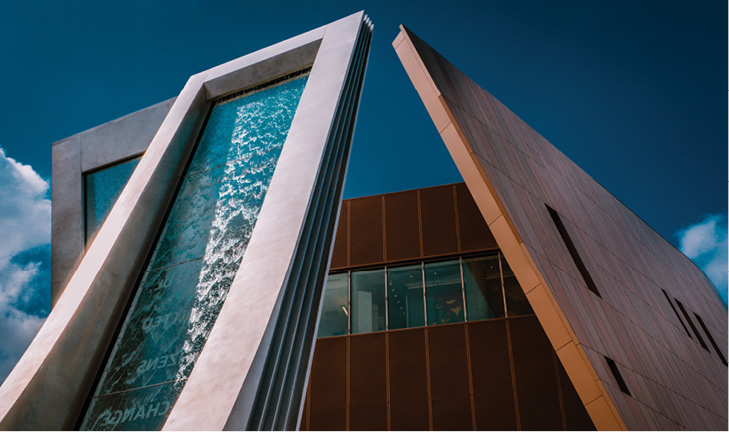 National Center for Civil and Human Rights in Atlanta, Georgia.

Meaningful collaborations begin with setting clear parameters for the project and your potential participation. Can you realistically invest the effort, given your current commitments? Once I scoured archival sources for an exhibition only to learn later that I had been recruited less as a historical consultant and more as a research assistant for the senior scholar who wrote the exhibition catalog. Although I did receive compensation, if I had understood my role more clearly, I could have at least made an informed decision about my involvement. But expectations cut both ways: I once deeply disappointed a public history team when I could not devote the required time or travel for the project.

For an on-camera interview, prepare, prepare, prepare. Request the questions in advance, or at least anticipate them. Approach a taping session as though you were on a job interview, mindful of what you say and how you say it. You may have to deflect the videographer’s attempts to feed you lines. I have been told more than once by a filmmaker: “You are not giving me the narrative I need.” Remember: your words will be edited, so strive for interesting, succinct, declarative sentences (informed sound bites), rather than long, involved explanations, which can create opportunities for inadvertent editorial mischief. “I was taken out of context” seems a particularly bitter admission.

Most importantly, consider the stakes when you are engaging multiple ­publics. Over 20 years ago, I was part of a consulting trio that assisted an intrepid young curator with the task of refreshing the main exhibits in a small museum that focused on an area’s rich agricultural heritage (a large assortment of aging farm implements graced the property). During the formal presentation to the trustees, the curator revealed plans for a section highlighting everyday life for migrant workers at the turn of the 20th century—from modern dormitories for single white men to more modest dwellings for Asian and Mexican families, all located in segregated enclaves. Tightening his jaw, one trustee made the connection between portraying inequality in the past and bringing unwanted attention to current inequality: “I will have no red flag of that Caesar [sic] Sha-vez [sic] in my museum.” Anticipating such criticism, the staff had already secured board support for a more inclusive depiction of the region’s immigrant roots. The curator pointed out that many local visitors had farm worker grandparents or parents, and the section would resonate with them in ways that weather-beaten equipment had not. Making clear why our scholarship matters constitutes the first step in any public history enterprise.

Guidelines and cautionary tales aside, moments of serendipity do occur. As an example, the proposed Women of the West Museum created a space of meaningful possibilities. During the summer of 1996, I learned a great deal from colleagues Susan Armitage, Elizabeth Jameson, and Patricia Albers as we moved toward a shared vision, guided in the process by retired Motorola executive Toni Dewey and Victor Danilov, director and president emeritus of Chicago’s Museum of Science and Industry. The ambitious goal was to create “the first museum . . . dedicated to the history of women of all cultures in the American West.”1 The ­intellectual imprints from those brainstorming meetings have lingered not only in my work but also in the work of those who would inherit the Women of the West Museum’s mission. Despite Dewey’s indefatigable efforts, which spanned almost a decade (she even recruited five former first ladies to serve as trustees), a brick-and-mortar museum never materialized, but in 2002 its spirit migrated to the Autry National Center. Eight years later, Carolyn Brucken, curator of western women’s history at the Autry, and Virginia J. Scharff, regents’ professor at the University of New Mexico, co-curated the landmark exhibition Home Lands: How Women Made the West, using material culture to tell the stories of women’s daily lives in three diverse regions: northern New Mexico, the Colorado Front Range, and Washington’s Puget Sound. In Brucken’s words: “Women were at the heart of turning Western places into homes and fighting over who has the right to make it a home.”2 Reflecting on the freighted meanings of domestic spaces, Scharff, whose previous work had emphasized independent women and the open road, declared, “Home Lands transformed me as a scholar.”3

As plans get underway for a congressional commission dedicated to the creation of a National Women’s History Museum, I cannot stress enough the importance of collaborative partnerships built on trust and an inclusive mission. We cannot replace “the universal man of American history . . . with the universal woman,” as Ellen Carol DuBois and I wrote in the introduction to Unequal Sisters: A Multicultural Reader in U.S. Women’s History.4 As more than just names on a masthead or as window dressing, scholars must be involved from the outset in program planning, not brought in after the fact (or in some cases, the fiction). Rather than presenting a triumphal story of progress, such a museum should provide opportunities for searching dialogues on women’s conflicts, complex interactions, and contributions (dare I say as unequal sisters). And there are literally dozens of public historians and academics eager to provide assistance. On an institutional level, the National Women’s History Project and the National Collaborative for Women’s History Sites offer two terrific examples of informed, dynamic partnerships.

For well over 20 years, the National Park Service has worked with historians across the country to revise dated narratives and create new landmarks. In 2011, César E. Chávez’s home and the United Farm Workers’ compound Nuestra Señora Reina de La Paz were added to the National Register of Historic Places, one of the first Latino-themed sites not associated with colonial Spanish settlements. Another prominent example is dedicated to an often-hidden chapter of the American Civil War: the Sand Creek Massacre National Historic Site commemorates the slaughter of 200 Cheyenne and Arapaho—mostly women and children—by the US Cavalry. Writer Tony Horowitz referred to it as “the My Lai of its day.” Despite the controversy that preceded its opening in 2007, Sand Creek has become a place of pilgrimage for American Indians. In the words of Karen Wilde, NPS tribal liaison, “You feel a presence here rather than just taking in the sights.” Horowitz interviewed one resident who connected the Sand Creek site to a larger story: “Something happened here that nobody should have ever did. Which makes me wonder what else happened in our history that we weren’t told about.”5 In her recent testimony before the Texas State Board of Education, distinguished historian Jacqueline Jones underscored precisely this point: “We do our students a disservice when we scrub history clean of unpleasant truths. . . . Unless we enable them to understand the historical roots of the here and now—and those roots are admittedly tangled and messy—we cannot prepare them to be informed, engaged citizens of the United States.”6 In conveying America’s stories, which include events such as the tragedy at Sand Creek and the bravery at the Greensboro lunch counter, public historians stand at the front lines of historical knowledge and collective memory.

3. Telephone conversation with Virginia Scharff, December 5, 2014. I would like to thank Susan Armitage, Elizabeth Jameson, and Virgina Scharff for sharing their thoughts and memories.