Will Robots Rule the World?

On a recent cover of the New Yorker (October 23, 2017), robots purposefully stride to their jobs; the only human in sight is unemployed and begging for change. We are warned: this could be our future. The illustration perfectly captures the current anxiety about automation’s impact on the workplace. 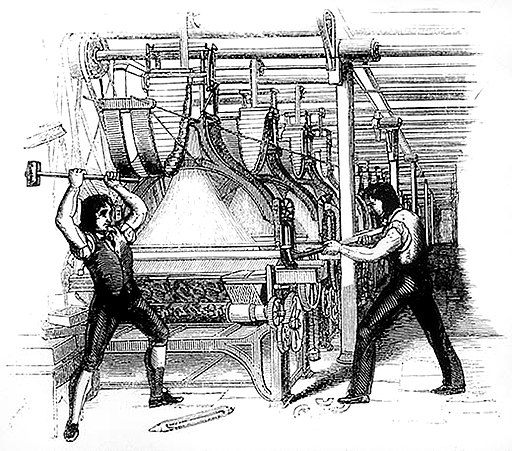 People have long connected technological change with the destruction of jobs, as did the Luddites when they destroyed power looms in the 19th century. New fears about robots replacing humans in jobs now extend beyond industrial production to AI and other technologies. Wikimedia Commons

Similar concerns have been sparked by previous periods of rapid technological change. What can we learn from the past about technology’s impact on our lives and livelihoods? Does history provide us with any insights into how to meet the challenges it poses? The National History Center recently addressed these issues in a congressional briefing on automation and the workforce, presented by three leading historians of the subject: Amy Bix (Iowa State Univ.), Jonathan C. Coopersmith (Texas A&M Univ.), and Louis Hyman (Cornell Univ.).

The fear that machines will make workers redundant is hardly new. Bix reminded the audience that the term Luddite, with its anti-technological connotations, originated with the handloom weavers who opposed machine production of textiles in early industrial England. Technological change has long been associated with the “creative destruction” of capitalism, and sometimes with the destruction of jobs, pure and simple. During the depths of the Depression, President Roosevelt and others worried about “technological unemployment,” spurring calls for a “science holiday” to mitigate the problem.

While most Americans have associated science and technology with progress, especially since World War II, they also have been susceptible to waves of what Coopersmith referred to as “techno-pessimism.” This sentiment intensified in the wake of the 2008 economic collapse. It gave rise, for example, to calls for a “robot tax.” But even this concern about robots has a much deeper history. As Bix showed in her presentation, the New Yorker cover image echoes a decades-long tradition of cartoonists commenting on robots as job-killers.

Still, the panelists agreed that there’s something new about the present moment of technological innovation. Not only are robots replacing human labor in industrial production more rapidly than ever before, but technological advances in other areas, such as artificial intelligence (AI), 3D printing, and synthetic biology, are transforming the workplace as well. Bix suggested that these changes in the nature of employment have raised new questions about the relationship between work and well being, about shifting definitions of “skills” in the age of AI, about the role of women in the workforce, and much more.

None of the panelists, however, made a more forceful case for the unprecedented nature of the changes being wrought by innovation than Hyman. He argued that today’s digital revolution is giving rise to a “great transition” in human life, one as profound and dramatic as the shift from an agricultural to an industrial society a few hundred years ago. Let’s not romanticize the jobs that industrialization created, Hyman insisted—factory and mine labor is repetitive, backbreaking, and dehumanizing. It forces humans to work, in effect, like robots. So why not let robots take on these tasks and allow humans to pursue more creative, emotionally satisfying activities?

According to Hyman, the technological transformation we are currently experiencing can bring about the restoration of the freedoms we once enjoyed as independent farmers. While his Jeffersonian notion of the self-reliant yeoman is itself a romantic distortion of the past, it reminds us of what was lost with the turn to industrial labor—a sense of independence that new technologies might allow us to reclaim. Hyman cited some startling statistics: nearly 95 percent of the jobs produced over the past 10 years consist of contracting, consulting, and other occupations that diverge from conventional wage labor; they now make up a third of the labor force. Digital platforms have spurred the growth of freelancing, creating new opportunities for people to engage in the global economy on their own terms, thereby reclaiming control of their working lives. For this gig economy to achieve its full potential, however, Hyman argued that the country needs a 21st-century New Deal to protect an increasingly flexible, freelancing workforce from the heightened risks they face.

The panelists agreed that it is neither possible nor desirable to turn back the clock on these rapid technological changes. To their mind, the benefits clearly outweigh the costs—a view, it should be said, that some members of the audience questioned. The panelists also acknowledged, however, that the changes can be difficult and disruptive for many people, much as the industrial revolution was for earlier generations. Automation’s impact on the workforce will require social amelioration. They pointed to the need to revamp labor laws, provide job training, protect the portability of pensions, and ensure access to medical insurance. Unfortunately, the current state of American politics makes it unlikely that these recommendations will be addressed. To judge from our last presidential election, the most pressing technological threat we face at present isn’t posed by mechanical robots, but by digital bots.