Audio for the Ages

Jeremy Morris (Univ. of Wisconsin–Madison), founder of PodcastRE, had a twofold interest in podcasts in the mid-aughts. One was professional—his graduate degree was in music and music technologies, and he co-wrote an early scholarly article on podcasting. The other was Midnight Poutine—a blog highlighting culture and arts in Montreal that Morris wrote for frequently. As part of his work on the blog, Morris helped transition one of its segments on upcoming music performances in the city into a podcast. “Instead of just telling people what’s going on, we played them some songs of the bands coming into town,” Morris says. “So I ended up hosting that podcast for about five or six years while I was doing my PhD there.” 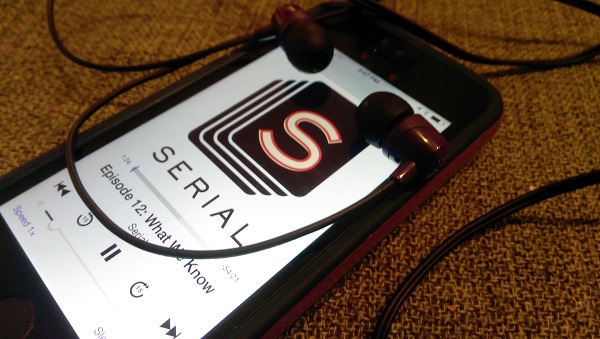 Serial, a popular podcast from 2014, ushered in what many call the Golden Age of Podcasting. PodcastRE will enable scholars to find podcasts, including Serial, in one comprehensive database. Casey Fiesler/Wikimedia Commons/CC BY 2.0

Morris’s personal and professional interest in podcasting continued when he moved to UW–Madison in 2012. His attempts to study early podcasts, however, soon hit a roadblock. Morris realized that many older podcasts were difficult or even impossible to track down. Some fan communities saved earlier shows, but as Morris says, “There was no centralized location to go and find these things.” Around the same time as Morris struggled with the problem of lost and disappearing shows, Serial—a multi-episode podcast investigating a 1999 murder—was setting new records in downloads. With Serial’s popularity in 2014, Morris knew that “there are going to be people who are going to want to study this, who are going to want to write about different shows.” The realization led Morris to found PodcastRE, short for Podcast Research, a “searchable, researchable archive of podcasting culture.”

The release of Serial, according to popular media that covered the show’s meteoric rise, ushered in the Golden Age of Podcasting. According to Morris, however, “Podcasting has actually gone through several golden ages.” Since the mid-2000s, he notes, there has been a steady, if not particularly dramatic, increase in listeners each year. The “hype around podcasting waxes and wanes over time,” he explains, and journalists have used the term “golden age” to describe the popularity of podcasting as a genre at various points in history. “I’m more interested in the ways that different periods of audio production get framed discursively as worth being paid attention to,” he says, adding that PodcastRE will allow users to study the “inflection points” in podcast history when the form “somehow re-emerges as ‘exciting’ and ‘new’ again.”

Eric Hoyt (Univ. of Wisconsin–Madison), the lead software developer and analytics project lead for PodcastRE, connects the current moment in podcasting with earlier years of other media forms such as film, radio, and television: “These media forms that at a certain time seem ubiquitous, saturating the environments that we live in, can . . . become quite difficult to track down over time.” PodcastRE, he says, “seemed like a great project to try to systematically preserve this form of media—podcasting—as it was being created.”

On PodcastRe’s website, users can enter keywords and search for podcasts or specific episodes. Clicking on a resulting episode brings up information about the show, which could include the provided description, the podcast’s logo, title, date, episode length, and, best of all, the episode audio, streaming from wherever the podcast holds its files. Some episodes include transcriptions, provided by the now shut-down Audiosear.ch.

PodcastRE began when Morris and a research assistant started collecting podcasts informally in 2013 and 2014. In 2015, they finally set up a web interface and searchable database. Over the years, Morris says, a “rotating crew of people” worked on the project, but he especially credits Peter Sengstock, the lead tech specialist on PodcastRE, with “creating the infrastructure and overseeing its migration to a much more robust platform.” Hoyt officially joined Morris on the project around 2015.

The challenges to developing and populating a digital archive like PodcastRE are plenty. The “ultimate goal of the project was to create a database that could make audio usable and study-able like you do with library search catalogs,” says Morris. To achieve this goal, PodcastRE relies on metadata, or the basic information about the podcast (like title, genre, and run time) embedded in the episode file. Unfortunately, metadata can vary depending on how and where podcasts are accessed; an audio file downloaded directly from its source, for example, could provide different information than an episode obtained through subscription using a digital service such as iTunes.

There are also challenges with versioning and changing audio files. The original airing of Serial, for example, featured an ad for MailChimp, a “strange, funny little piece of audio,” says Morris, that eventually “became part of the lore of the podcast.” But dynamic advertising, which allows podcasts to air new ads in old episodes depending on sponsors, meant that someone listening to the episode at a later date might hear a different ad and, therefore, a different version of the episode.

One final and omnipresent challenge is deciding what will actually go into the archive. “It’s tempting, because audio files are so small, to think that you can just grab everything,” says Morris. But that’s easier said than done. It’s relatively simple, for example, to write a script that captures the top 100 shows in iTunes. But, asks Morris, “how do you create strategies and technologies that help you capture some of the things that are not in the obvious aggregate spots where other podcasts are showing up?” Morris says the team is working on scripts to read weekly podcast newsletters, where people recommend their favorite shows, in order to discover less popular podcasts. Many of these, he says, are inherently more “vulnerable” because they are not produced by major broadcasters.

But much of the labor that goes into collecting lesser-known podcasts is manual. The team at PodcastRE uses researcher networks and search sites like Podcasts in Color, a directory of podcasts by people of color, to identify shows worth saving. Hoyt says that without preserving a range of podcasts, there’s a “risk of losing . . . a sense of the diversity and scale” of the podcasting world. There’s more to podcasting than Serial, and it’s crucial, says Hoyt, that “more than just the canon gets saved.”

The site as it stands is basic, but Hoyt and Morris have grand plans for analyzing the podcast metadata and sound files and making analytical tools available to researchers, including one that would allow users to search for trends across the archive using metadata. Morris says he also imagines “collections”—sets of podcasts built around specific topical issues. Also in the works is an audio clip tool that would allow users to store key moments in the podcast they’re researching and come back to them later.

In 2017, the NEH awarded a Digital Humanities Advance Grant, in partnership with the Institute of Museum and Library Services, to the Board of Regents of the University of Wisconsin System, with Morris and Hoyt as project directors, for “Investigating the Golden Age of Podcasting through Metadata and Sound.” The NEH funding will allow Hoyt and Morris to “develop data analysis and visualization tools to really explore the collection at scale,” says Hoyt.

Hoyt and Morris are also working to preserve copies of all shows the archive currently links to so that researchers can access and study the files even when the shows are no longer available. Support from UW–Madison has allowed them to create a data preservation infrastructure for the podcast files. Hoyt notes that they are “following the best practices for preservation,” including storing data files on campus and writing the files to Linear Tape Open, a technology for storing data on tape. “It never ceases to strike Jeremy and me as highly ironic that one of the best ways to save born-digital objects is to actually put them on tape,” says Hoyt.

The need for a resource like PodcastRE comes out of a recognition that podcasts can be a valuable source of information for scholars. “There have been some pretty big things that have happened in our culture coinciding with this Golden Age of Podcasting, involving politics and cultural shifts,” says Hoyt. Future historians interested in understanding US electoral politics in 2016, for example, says Morris, will be able to use PodcastRE to find a set of audio texts related to the issue. Saving these podcasts will also be valuable for, as the PodcastRE website notes, what they tell us “about audio’s longer history, about who has the right to communicate and by what means.” As the website warns, even with the reach of podcasts in the present moment, “if we’re not making efforts to preserve and analyze these resources now, we’ll find ourselves in the same dilemma as many radio, film, or television historians now find themselves: writing, researching, and thinking about a past they can’t fully see or hear.”

The significance of doing this project at this time is not lost on Hoyt and Morris. “I’m friends with a lot of people who study early cinema, and I feel like we’re at that moment in podcasting where it’s almost like the nickelodeon era, and you can tell there’s something really exciting and fascinating happening,” says Hoyt. “And we’re trying to go around and capture that, and hopefully we’re capturing the right thing.”