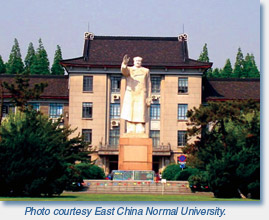 The 20-foot-tall, white marble statue of Chairman Mao with his right arm outstretched stands firmly in the center of the old campus at East China Normal University (ECNU) in Shanghai. On Thursday nights after dinner, enthusiasts use the statue as an English Corner, standing under the arm to practice the global language and to flirt with each other. Foreign students and staff join in and the din of English in different accents and proficiency levels engulfs Mao in American popular culture.

Teaching American history courses in mainland China is difficult and wonderful. For most of their lives, students have succeeded by silence, excelled by regurgitating material verbatim, suffered from enormous stress not to lose face, and shouldered the world of family expectations. Students in China have limited experience with the most banal academic questions: “But what does it mean?” and “How do you know that is true?” Students appear to wilt before the Socratic method and are seemingly confused by the Hegelian insight that it is better to be in doubt than to know absolutely. And yet, increasingly, on Chinese campuses, students are learning that the questions asked are as vital as the answers found.

Whereas Western students focus early and often on postmodern (mis)understandings, Chinese students advance by the rote memorization of approved answers. Students can often tell what the book says, but they have not been taught that a text is an argument replete with silences. All their lives students prepare for the one big examination that will determine not only the particular university they will attend, but also whether or not they will be able to matriculate anywhere. Every year, on consecutive days in early June, virtually every 18-year-old high school graduate with a qualifying grade point average (9,570,000 students in 2010) takes the long-anticipated test and waits for the results that place the top two-thirds in universities. The remaining one-third will never be university students.

The resources for teaching on mainland Chinese campuses vary greatly. Library buildings are huge, but dusty shelves often hold few books, journals, magazines, or newspapers of substance for the study of the humanities. Academic departments sometimes have randomly-awkward collections, with limited opening hours and no-borrowing policies. And yet, humanities sources are available because of the massive investment in technology. Classrooms bulge with state-of-the-art computers, projectors, high-speed internet connections, DVD players, and sound systems that provide connections to worldwide digital history sources and current events.

Language, culture, and structure create barriers. Communication issues abound. In my case, with no ability in Mandarin—beyond the words for hello, how are you, thank you, I don’t want any, okay, cold beer, rice, show me, and goodbye—all instruction was in English. Student discussions took place in broken English. Slang, idiom, irony, satire, jargon, and big words slid into an abyss of misunderstanding. Every student used a hand-held translator in classes. Even though these are the same pocket translators responsible for much of the Chinglish that is found everywhere, without this kind of technology, the courses would have suffered.

Overwhelmingly, my students at ECNU in 2007 were females from the countryside, including the impoverished Anhui province where families struggle to make a few dollars a month. With the costs of public university tuition and housing at approximately $1,400 per year, not including food, course materials, and necessities, students live with the guilt of parental sacrifices and the fear of failing. They want only to memorize the material for the tests and prefer not to spend time in explorations along tangents not directly related to getting the highest grades. The pressure to finish as soon as possible leads students to take nine or twelve courses per semester—and the semesters are 18 weeks long. Books are too expensive and with no time to read for so many courses, students rely on class attendance to carry them through the exams. This is pragmatic since lecture courses in classrooms where the desks are bolted to the floor in strict rows is the norm.

Most of my courses were for majors of English, American studies, or political science. While the advanced students had more knowledge, the younger students were clearly better at English. A family’s economic status seemed to make a difference, but gender and ethnicity did not. All students adopted English names, even if Wolf, Vingo, Marilyn, Shackle, and Hooter were the easiest to remember for some reason. I was torn between trying to learn everyone’s Chinese name so that they could not hide behind a mask and celebrating the liberating process of self-identification and re-invention.

While teaching methods varied by course and university, I came to understand the importance of silence, patience, and PowerPoint presentations. With the incorporation of movies and the internet—especially YouTube—history came across in a new way. Methodologically speaking, Confucius stressed hierarchy and order and Mao demanded memorization and order. They remain formidable guardians of an old way and opponents of teaching methodologies that insist upon an interpretive and chaotic medium. Hollywood, the internet, and PowerPoint images confront these old men and are revolutionaries of the change, the challenge, and the promise of Chinese classrooms, now roaring along at the speed of Baidu and Google, when the latter is available.

Frustrated at times by the unacceptable conclusion: give up on substance—which meant reducing the content of the course—I cut the number of assigned pages per week, added a film night for each course, and used more digital media. One of my best experiences was a three-hour graduate course on American culture at Northwest University in Xi’an in 2006, which I divided into a format of one-third lecture and two-thirds seminar. I arranged a mandatory interview with each student before the course began to assess the language level and background knowledge crucial to a selection of texts. Thirty graduate students of English—divided equally into literature, linguistics, and translation majors—read forty somewhat difficult pages per week. The Fulbright Commission paid for the handouts. I used PowerPoint in the lectures. For the seminar portion, the students prepared three short sentences on each reading to explain: What is the reading about? What is the thesis? Why might the thesis be wrong? I used clips from the internet, often, to encourage more debate.

Once a week, at night, I held a film session with a discussion period to develop the issues of race, class, gender, continuity and change, while touching on such themes as nationalism, trans-nationalism, liberalism, and realism. Few had seen the films before: The Crucible, Black Robe, Amistad, Glory, Unforgiven, The Age of Innocence, The Aviator, Eat a Bowl of Tea, Grease, Walk the Line, Good Night and Good Luck, Guess Who’s Coming to Dinner, Thelma and Louise, The Insider, and The Human Stain. Many had seen Modern Times and Platoon but only on smaller monitors. The classroom had a large, wall-filling screen, blackout curtains, and a wrap-around sound system.

We watched Pleasantville first. Students responded immediately to heartthrob Tobey Maguire, who they knew from his role as Spider-Man. The film is pregnant with discussion issues tying the conservative 1950s with the liberal 1990s by highlighting the differences via a clever deployment of black and white to color images as individuals learn to question their elders, their surroundings, and themselves. The storyline is thick with feminism and youth power. My students recognized the small committee of gray men who exercised patriarchal control, censorship, and arm-twisting tactics to limit social change. We explored the cultural revolution in Pleasantville, the student-led movement for more freedom, the fear of the outside world, and the opening up of Pleasantville to education. Could “pleasantville” or “harmonious society” indicate just the opposite?

We did almost all of this without overtly attacking China. Students openly criticized the authoritarianism, social restrictions, censorship, fear, change, court system, destruction of culture, outsiders, and more, in the context of the film. The movies opened the door for better analyses of the assigned texts in the seminar classes. The readings began to pop up in the movie discussions as students made connections.

There were so many requests from students and colleagues outside the class to be allowed to attend film night that I polled my students to see if any had objections to outsiders sitting in. I worried about freedom of expression and trust issues. I worried that censors might shut down the series. In the end, I let the world in. Nearly 100 people came for each viewing, including my colleagues and perhaps even a mole or two.

The Dance of Texts and Net

In my large office in Xi’an, I established a small reference library with 200 books shipped from Copenhagen. Students staffed the library on weekends and three days a week from 10 a.m. until midnight.

The dean provided me with bookshelves, sofas, tables and chairs, a water machine, a new computer, a DVD player, printer, and international internet connection. The web searches quickly ran afoul of “viruses” and I had to prohibit student use except when I was there. The students often replayed the movies from the film series. Clearly, the library was a popular hangout, even if the books were sparingly used. Part of the under-utilization was due to the fact that students had to be trained to use a book. I ran two special classes to explain how to cross-reference information, and to illustrate differences in the kinds of material in anthologies, journals, monographs, textbooks, autobiographies, and criticism.

In 2008–09 at Shantou University, my U.S. Politics and Contemporary America classes discussed the U.S. presidential campaign and compared political systems, societies, and media. I began each class session by immediately opening the internet to the New York Times. We called up political speeches, interviews and news footage on YouTube, segments of Leno and The Daily Show, statements by Obama and McCain, CNN, and Colin Powell’s endorsement of Obama on Meet the Press. We watched and discussed one episode of The West Wing each week. Realclearpolitics.com provided daily polling results, predictions, and a wide-ranging link to articles and videos. The seminars morphed into workshops for discussing media frames.

Chinese students yearn for multiple endings. Those who have long believed that history is out of touch with their experiences can be lured into knowledge through the gizmos of techno-globalization. In China, DVDs and YouTube are not for dumbing down, they are for smartening up. Students proceeded from the movies and internet clips to the books and web sources to verify the stories or seek other tangents. Just as books in the West can become bestsellers after a film premieres, so students can gain enormously when they base their search for knowledge on a film they have seen. The silence of Confucius and the certainty of Mao have given way to one flickering learning opportunity after another. The unwarranted, and often snobbish, pooh-poohing of those who show films in university classrooms must be rethought as we teach the students first and the courses second.

Russell Duncan is professor of history at the University of Copenhagen, Denmark, where he directs the Contemporary America Project. From 2006 to 2010, he held teaching and research positions and lectured at two dozen universities in Mainland China, Hong Kong, and Macau.