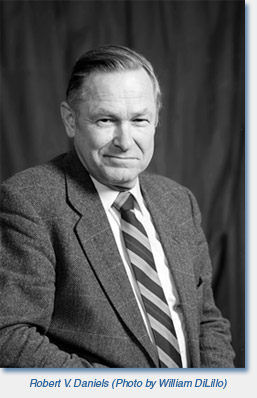 Robert V. “Bill” Daniels, professor emeritus of history at the University of Vermont (UVM), died peacefully on March 28, 2010, at the age of 84. He was a distinguished scholar of Russian and Soviet political history, with 21 books and more than 150 articles to his credit.

Daniels was born in Boston on January 4, 1926, and had a peripatetic childhood, moving from military base to military base, but his roots were in Vermont. Daniels often spent his summers in Burlington at the beautiful and historic home of his grandparents, where he later lived while teaching at UVM. In 1943, he graduated from St. Albans School in Washington, D.C., and began his freshman year at Harvard University, majoring in economics. He joined the U.S. Navy in 1944 and after a time in the V-12 program, he was assigned to serve as paymaster on the USS Albany, a heavy cruiser.

In 1946, Daniels received his AB degree magna cum laude from Harvard and then earned an MA and a PhD degree in Russian history, also from Harvard. After receiving his PhD in 1951, he served in research and teaching positions at MIT, Bennington College, Indiana University, and Columbia University before joining the faculty at UVM. For the next 32 years, Daniels was the dean of Soviet studies in northern New England and a pioneer in the study of the Russian revolution and the genesis of the Soviet political system. A political historian, Daniels was among the first scholars to challenge Cold War shibboleths about the Soviet Union, and his work quickly came to the attention of a national and international audience.

His first book, The Conscience of the Revolution: Communist Opposition in Soviet Russia (1960), was translated into German, Italian, and Japanese editions. Other well-known works of his early years include The Stalin Revolution: Fulfillment or Betrayal of Communism (1965), which went through four editions, and a seminal history of the Russian revolution, Red October: The Bolshevik Revolution of 1917 (1967). His A Documentary History of Communism (1960), which has also gone through many editions, continues to be a vital compendium of communist writings that has been adopted for Soviet history courses in universities across the U.S.

In the second part of his career, Daniels’ attention shifted from the revolution to a study of Soviet politics writ large; The Dynamics of Soviet Politics (1976), Russia: The Roots of Confrontation (1985), and Is Russia Reformable? (1988) are only three examples. Retirement saw an outpouring of important books, seven in total, focusing on contemporary Russian as well as Soviet politics; among them The End of the Communist Revolution (1993), Russia’s Transformation: Snapshots of a Crumbling System (1998), and The Rise and Fall of Communism in Russia (2007).

Examples of his work outside the Soviet studies field include Year of the Heroic Guerilla: World Revolution and Counterrevolution in 1968 (1989) and a work of which he as a linguist was especially proud, Fodor’s Europe Talking: A Guide to Nineteen National Languages (1975). His scholarship is characterized by his breadth and depth of knowledge, superb research, acute insights, and elegant prose. His fair-minded and scrupulous approach to Soviet politics at the height of the Cold War is especially noteworthy. Suffice it to say that Daniels’ knowledge of Russian and Soviet political history was unsurpassed, and he generously shared it.

His work was supported by numerous grants—from the Guggenheim Foundation, the National Endowment for the Humanities, the Kennan Institute for Advanced Russian Studies, the International Research and Exchanges Board, and the Rockefeller Foundation. He travelled regularly to the USSR as a fellow at Moscow State University and the Soviet Academy of Sciences. He served on several key committees of both the AHA and the American Association for the Advancement of Slavic Studies and was vice president (1991) and president of the AAASS (1992). He also served on numerous editorial boards; particularly important to him were the Journal of Trotsky Studies and the Journal of Contemporary History. He wrote regularly for Dissent and the New Leader. In 2001 he was named a Distinguished Contributor to Slavic Studies, the AAASS’s highest honor.

Daniels achieved this extraordinary record of scholarly accomplishment—an authentic demonstration of “Bolshevik tempo”—while he was a full-time teacher and administrator at an institution without a doctoral program in history or a research library. As a teacher, he was admired for his rigor and breadth of knowledge. As an administrator, he was responsible for many “firsts.” He was the founding director of the Area and International Studies Program at UVM, 1962–65, and a co-founder of the Center for Research on Vermont. He was also the director of the Experimental Program of the College of Arts and Sciences, 1969–71 and chair of the history department, 1964–69. He edited a history of the University of Vermont for its bicentennial celebrations in 1991. UVM honored him with a University Scholar award in 1982 and an honorary LLD in 1994. In 2004, the Area and International Studies Program created an annual prize, the Robert V. Daniels Award for Outstanding Contributions to the Field of International Studies.

Daniels was active in the state as well. He had a distinguished career in politics, serving in the Vermont legislature as state senator from Chittenden County from 1973 to 1982, becoming Senate minority leader in 1981. He served on the Senate executive committee and committees on fiscal affairs and government operations. He was a member of the Vermont Health Policy Council and chaired the Governor’s Commission on Health Care. He was one of the founders of the Vermont-Karelia sister state project and was a member of its advisory board. He was also a trustee of the Vermont Historical Society.

This litany of accomplishments gives a sense of Bill Daniels as a professor and scholar, but not as a person. Daniels had an extremely fertile mind and catholic interests; his erudition, which went far beyond the field of Russian studies, was truly amazing. (For example, when a friend shared a Norwegian poem with him, Daniels immediately recognized the language not as Norwegian but “Nynorsk,” an artificial poetic language invented in the 19th century and intended to sound slightly archaic to Norwegian ears.) He never really aged, so strong was his enthusiasm for history, politics, and the study of society through historical prisms. He loved wit and humor, was constantly “teaching” anyone who would listen, thinking new thoughts, investigating new fields, reading the staggering amounts of stuff that came to be piled on every flat surface in his office and study at home. He was a tremendous inspiration, a genuine, supportive, and friendly colleague in an academic world often starved for just such people. His opinions prompted real reflection and commanded special respect. He really believed that there should be room for both the orthodox and the eccentric in a liberal arts education. He was one of the least pretentious scholar-intellectuals that anyone could hope to meet.

In 1945, Daniels married Alice Wendell, whom he met on Valentine’s Day 1943. They celebrated their 64th wedding anniversary in 2009. His wife, four children, and four grandchildren survive him. Bill Daniels’ keen intellect, generous sense of humor, and positive attitude will be missed by all who knew him.