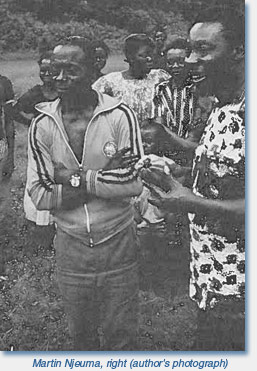 Martin Zachary Njeuma (April 9, 1940–April 28, 2010) was born in Buea, Cameroon, to Isaac Mase Njeuma and Ma Sophie Mondinde. He was the first of two sons in a family that eventually included 10 siblings. He earned his BA degree (with honors) in history in 1964 from the University of Ghana. He then studied French at the University of Paris from 1965–66. He obtained his PhD in African history in 1969 from the School of Oriental and African Studies (SOAS) of the University of London.

Njeuma returned to Cameroon in 1970 and worked as director of the National Archives in Buea. He later was recruited to the University of Yaoundé where he built his career, eventually becoming a full professor (1981), head of the history department, and dean of the faculty of letters and human sciences. He retired in 1995.

Martin Njeuma was a legendary figure among world historians of a certain age; his first name was enough to trigger an immediate response, one of profound love and respect. His impact is felt with his substantive early scholarship on West African history, as well as his influence on a small group of scholars who worked with him in Cameroon in 1982 at the behest of the American Historical Association.

In the early 1980s, the AHA hoped to address the difficulty of placing all of Africa within the most common macro-historical approaches by sending a delegation of 12 American scholars of diverse regional specializations to study for six weeks in Cameroon, which has long been reputed to be “Africa in miniature.” It was the AHA’s hope that the “Cameroon Study Group” would re-conceptualize the rich content of African history along broad themes that might be used to improve the teaching of Africa in the United States. Martin Njeuma was its local program director/facilitator. Njeuma had already published his influential Fulani Hegemony in Yola (Old Adamawa) 1809–1902 (1978) and was well on his way to becoming one of his country’s most noted historians as well as a valued friend and colleague to many in African Studies. He quickly demonstrated that his selection as host was truly inspired.

He bused his new charges straight from their arrival at the airport in Yaoundé to his boyhood home in Buea, one of the most culturally significant areas in Africa. Thereafter, Njeuma took the group to visit a local fon, a traditional dignitary, who was Oxford-educated and spoke movingly of the complexities of juggling his roles as a living ritual object and as a modern politician. Over the next three weeks, the group walked across a battlefield of the First World War (at Maroua), was exposed to aspects of Fulani customs, encountered numerous examples of post-coloniality, and gained insight into the hybridization of Catholic and indigenous religious traditions. All these encounters benefited from Njeuma’s physically robust approach to life, his great sense of humor, and his intellectually gregarious tutelage which also kept the group moving, in body as well as mind.

In retrospect, it was natural that during these experiences the group began to discuss amongst themselves the larger theoretical possibilities suggested by the evidence, comparative and otherwise, Njeuma had enabled them to collect. That evidence confirmed for some and suggested to others that a broader approach to all of human history, not merely that of Africa, was required. Had Martin Njeuma been less generous of mind and spirit, he could have put a damper on such thoughts, privileging his specialist’s knowledge and brushing off the endless series of queries posed to him by the group that would subsume what they saw in Africa into a larger framework. However, his own scholarship had already engaged themes that were to become central to the field of world history, such as migration and cultural fusion, and he readily offered his encouragement to those about to further engage these and related subjects. Shortly after discharging their AHA responsibilities, many of the Cameroon Study Group helped found the World History Association (WHA).

But Martin Njeuma was more than a one-time midwife to a new field of history. Over the years, he did yeoman service as the WHA’s liaison to the African academic world, thereby helping to cement internationally the movement now called world or global history. He also continued to contribute to the field of African studies, writing An Introduction to the History of the Cameroon: Nineteenth and Twentieth Centuries (1990), and numerous chapters in books, articles, and essays. He was the recipient of Fulbright–Hays (1976, 1984, 1994) and Rockefeller (1996) grants to name but two, and was in demand as a visiting professor in both Europe and the United States—the University of South Carolina (1975), Northwestern University (1983), the University of El Paso (1994), the University of Tromso (1995), and the University of Oslo (1997). He also enjoyed emeritus status and served in high administrative posts within Cameroon’s university system. For his manifold services to the history profession, Martin Njeuma was named the AHA’s Honorary Foreign Member in 1993, the first and thus far only African scholar to receive the award. Recently, the Republic of Cameroon appointed Njeuma head of the group tasked with commemorating the 50th anniversary of the nation’s independence. His ill health prevented him from assuming the post.

Martin Njeuma will always hold a special place within the world history community. His family, which included two children and his distinguished educator spouse of 42 years, Dorothy Limunga Njeuma, often called him Zac, but to those world historians who knew him, he will always be “Martin” and, so long as memory serves, there will be only one.