From Firewalkers to Freedom Riders and Shamans to Spiritual Resisters: Documentaries at the Fifth Annual AHA Film Festival

The 2011 annual meeting will see the fifth annual AHA film festival. Movie makers use sounds and images, organized in aesthetic forms, to give emotional quality to historical issues. The Program Committee has designed the 2011 film festival to complement the annual meeting theme, “History, Society, and the Sacred,” selecting documentaries that provide unique perspectives on historical issues.

The choice of films reflects the realization that religion has taken on a new resonance in politics, global conflicts, and indeed in the understanding of history itself. The film screenings thus provide a means to explore the ways that religion interacts with social and political movements at key moments in history, ranging from the American civil rights movement and post-Maoist China to Imperial Japan. Since these issues and their interpretation will no doubt spark debate, the screenings will be accompanied by discussions hosted by the film’s director, producer, writer, or by experts in the field. 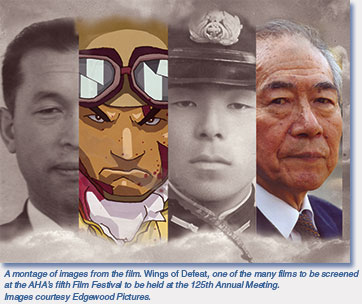 The films offer examples of how historians might think about religion as a force in history and society. Wings of Defeat (Screening: Saturday, January 8, 2:30–4:30 p.m., in Room 210 of the Hynes Convention Center), for example, provides a striking understanding of the suicide bombers who assaulted American naval vessels in World War II. (The venue will remain the same for all the films being screened for the AHA film festival.) The film features interviews with surviving Kamikaze pilots and American sailors, rare battle footage, and excerpts from Japanese propaganda films. The film challenges the myth of fanatical Kamikazes while simultaneously asking why so many young men volunteered to die, and why American sailors saw them as wild fanatics. Risa Morimoto, producer and director, and Linda Hoagland, producer and writer, will host the film and lead the post-screening discussion.

Writer and producer Gary Seaman will attend the screening of another film focused on religion and society in Asia, The Heavenly Court in Song Family Village: Gender, Hierarchy, and Religious Power in a North China Village (Thursday, January 6, 3.00–5.00 p.m.). Seaman has published three books and several articles on Chinese religion and is currently associate professor of anthropology at the University of Southern California. The Heavenly Court focuses on popular religious life in a contemporary Chinese village. The story describes the revival of popular religion that places female shamans at the center of religious activities. The shamans and their gods are organized as a heavenly “court” that reflects a hierarchy of prestige analogous to the traditional Chinese imperium. These rituals appear to be a revival of memories that were silenced under Mao. Yet many of the female shamans’ homes prominently display a picture of Mao situated at the top of the gods. Does this film, then, reveal that despite regime change, popular memory and hierarchies remain?

A third film, focused on India, provides a counterpoint to the perception that conflict between Muslims and Hindus pervades Indian society. Banaras Muharram and the Coals of Karbala (Saturday, January 8, 12:00–2:00 p.m.), produced, directed, and written by Marc Katz, explores a city where several ethnic groups join the annual Muharram festival. Thousands of people gather to participate in pageants and the ritual of running barefoot over hot coals while whipping their backs in honor of Imam Husayn, grandson of the prophet Muhammad, his horse, and followers who died in the battle of Karbala, in present day Iraq, in 680 CE. Through the streets of Banaras, Shia and Sunni men join in processions vowing “Never again shall we raise our hands against our brethren, never again Karbala!” The Muharram message of brotherhood, peace, community, harmony, and resoluteness raises the question of how this ritual began. Does it help create lasting cooperation among the people of Banaras? Program Committee chair Michael Fisher will lead the discussion of this film. Fisher holds the Danforth Chair in History at Oberlin College. His latest book is The Inordinately Strange Life of Dyce Sombre: Victorian Anglo Indian MP, and Chancery “Lunatic.”

A similar story of religious toleration is the subject of the second episode in God in America (Thursday, January 6, 5:30–7:30 p.m.), produced by Frontline and the American Experience. The documentary explores how religious tolerance became a central principle animating the First Amendment of the United States Constitution when Thomas Jefferson and Baptists in colonial Virginia cooperated to diffuse a conflict between the proponents of the Anglican state religion and dissenters. One of the consultants on the film, Randall Stephens of Eastern Nazarene College, will host the screening. He is the author of The Fire Spreads: The Origins of Holiness and Pentecostalism in the American South. Joining him to lead the discussion will be Stephen Prothero of the Department of Religion at Boston University, the author of God Is Not One: The Eight Rival Religions that Run the World—and Why Their Differences Matter.

Tecumseh’s Vision (Saturday, January 8, 5:00–7:00 p.m.), the second episode in the series We Shall Remain: America through Native Eyes, explores how early-19th-century Native Americans used religion to provide a mode of resistance to colonization. Written and produced by Ric Burns, and directed by Ric Burns and Chris Eyre, the film shows how the Shawnee leader Tecumseh and his brother Tenskwatawa, known as the Prophet, led a revival movement that drew thousands of followers from Indian nations across the Midwest. As the Prophet gained spiritual power, his brother forged a pan-Indian political and military alliance to create an independent Indian state. Colin G. Calloway, the John Kimball Jr. l943 Professor of History and Native American Studies at Dartmouth College—and one of the consultants for the film—will lead the discussion. He is the author of One Vast Winter Count: The Native American West before Lewis and Clark and The American Revolution in Indian Country.

God Is a Negro (Friday, January 7, 12:00–2:00 p.m.), episode two in This Far by Faith: African American Spiritual Journeys, recounts the multiple careers of Henry McNeil, one of the major black spiritual leaders of the 19th century. The film is produced and directed by award-winning documentary filmmaker June Cross, who is professor of journalism at Columbia University. Cross will introduce the film and lead a discussion afterward. The film chronicles the life of McNeil, a remarkable black religious leader who participated in the Civil War and many of the major political and cultural developments in African American life in the 19th century.

The next film in the series, Freedom Riders (Friday, January 7, 4:30–6:30 p.m.), produced, written, and directed by Stanley Nelson, tells a harrowing and highly inspirational story of six months in 1961 that changed America forever. More than 400 black and white Americans challenged Jim Crow laws and risked their lives by traveling on buses and trains through the segregated Deep South. Leaders from the major religious groups in the country joined these young civil rights activists while mobs of Southern whites, encouraged by local officials, used violence to thwart their efforts. The film features vivid testimony from the religious leaders, the Freedom Riders themselves, state and federal officials, and the journalists who witnessed the events firsthand. Ray Arsenault of the University of South Florida, author of Freedom Riders: 1961 and the Struggle for Racial Justice, the book the film is based on, will lead the discussion. The screening will be preceded by Session 95, “The Freedom Rides in History and Film: A 50-Year Retrospective,” (Friday, January 7, 2:30–4:30 p.m. in the Hynes Convention Center’s Room 206) a roundtable featuring historians, documentary film makers, former Freedom Riders, and government officials involved in the production of the film.

The final film to be shown will be the recipient of the 2010 John O’Connor film award, The Most Dangerous Man in America: Daniel Ellsberg and the Pentagon Papers (Friday, January 7, 9:30–11:30 a.m.)

Lary May, professor of history and American studies at the University of Minnesota, is a member of the 2011 AHA Program Committee. He is currently working on a project entitled “‘Bringing It All Back Home’: Global Hollywood and America’s Memory Wars.”