AHA Today , From the National Coalition for History

What follows is a mildly revised version of a memo prepared by the National Humanities Alliance relating to the budget proposal recently submitted to Congress by the Trump administration. In addition to housing the National Coalition for History which coordinates activity among history organizations, the AHA is an active member of the alliance. The AHA will keep historians up to date on what is happening here in Washington, DC, and what we would like you to do at various stages. We ask that you act only when we think it’s useful.

Presidential Budget Request Released
On May 23rd, the Trump administration released its presidential budget request for fiscal year 2018. This document expands on a budget blueprint released by the administration in March that called for the elimination of funding for most items imperative to the work of historians and our colleagues in other humanities disciplines. As anticipated, this detailed request reiterates earlier calls for the elimination of the National Endowment for the Humanities, Institute of Museum & Library Services, National Historical Publications and Records Commission, and area studies programs known as Title VI and Fulbright Hays.

The administration requests a small amount of funding for the NEH and IMLS for FY 2018: $42 million for the NEH and $23 million for the IMLS. For the NEH, this represents merely the salaries and expenses required to shut down the agency, and the amount required to honor preexisting grant commitments. For the IMLS, the money is designated for an “orderly close out.” The request also calls for the Woodrow Wilson Center to transition to exclusively private funding and requests $7.5 million in FY 2018 to facilitate that transition. 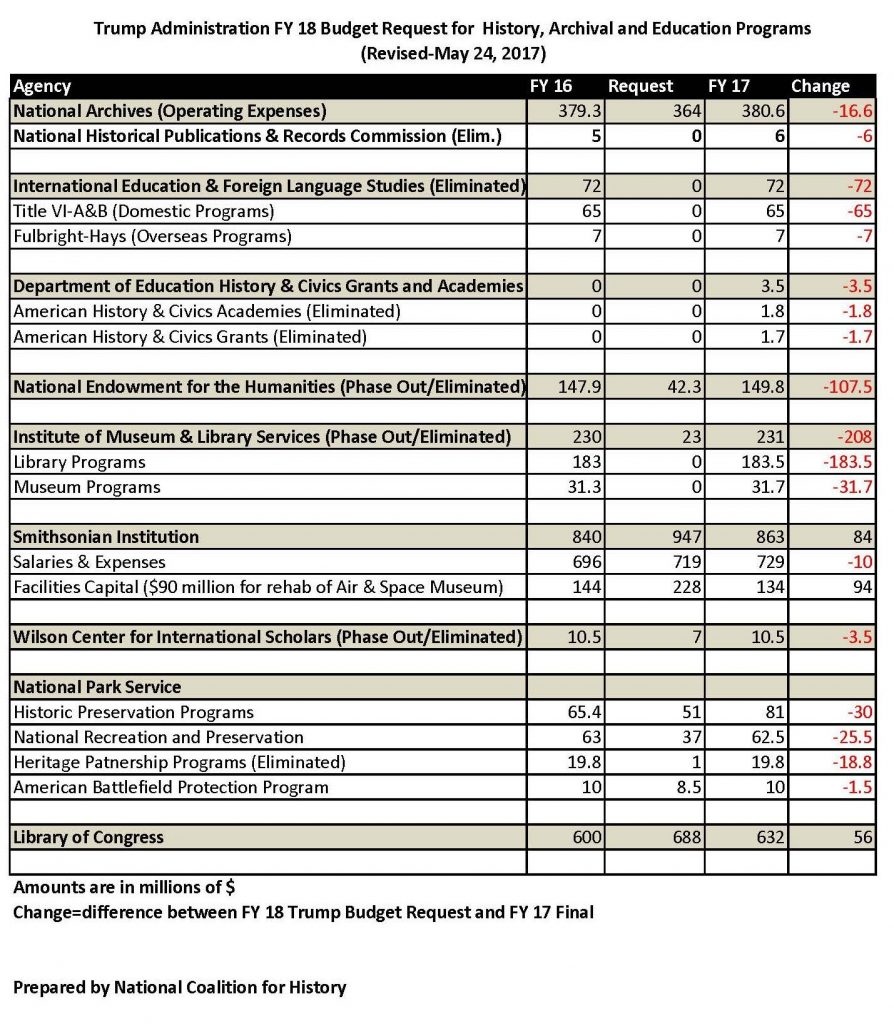 For the other funding priorities, the budget requests no appropriations for FY 2018. The National Humanities Alliance has compiled a complete funding chart for humanities programs.

Next Steps in the Budget and Appropriations Process
Now that the administration has issued its formal request, Congress will set an overall level of discretionary spending through a congressional budget resolution. The Appropriations Committee will then assign spending levels to its 12 subcommittees, and the subcommittees will draft individual bills. This work will probably extend through the summer.

The Administration’s Budget Request is Only Advisory
Congress will ultimately make decisions about funding. In recent years, the NEH has received strong bipartisan and bicameral support from the appropriations committees, including increased funding for FY 2017 announced just three weeks ago. While the overall fiscal constraints that the subcommittees will face are still unclear and the budget is likely to be tighter than last year, this bipartisan support remains encouraging.

Advocacy in the Coming Months
As Congress begins it work on FY 2018, it is important for members of Congress to hear from their constituents. The multiple ways to advocate for funding for the NEH and other programs are indicated on the National Humanities Alliance Take Action page. The AHA cannot emphasize too much, however, that the best thing to do is to visit your representative’s local office. Calling (local office or DC) is better than sending an e-mail.

This is likely to be a long battle. The AHA will keep its members informed as the situation develops and let you know about key moments when you can make a difference.

Please support the AHA in its advocacy efforts by joining, renewing your membership, or donating.

Tags: AHA Today From the National Coalition for History Advocacy