The Opioid Crisis in Historical Perspective

Prince is just the latest high-profile victim of an opioid addiction crisis that has devastated families and communities across the country in recent years. The problem has drawn widespread media coverage and spurred Congress into action, a rarity in the current political climate. Both the Senate and the House have recently passed legislation to address the crisis. Yet this is hardly the first time the United States has grappled with drug epidemics. What can we learn from past problems and the policies instituted to combat them? This was the subject of the National History Center’s latest Congressional Briefing, on American drug policy and drug addiction epidemics in historical perspectives. 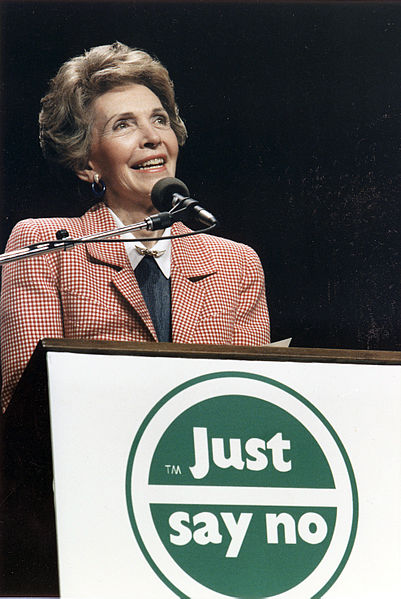 Nancy Reagan speaking at a “Just Say No” Rally in Los Angeles (May 1987). Wikimedia Commons

The briefing was conducted by David Courtwright, Presidential Professor at the University of North Florida and an authority on the history of drug addiction, and Keith Wailoo, Townsend Martin Professor of History and Public Affairs at Princeton University, a medical historian whose works include Pain: A Political History (2014). Alan Kraut, University Professor at American University and a historian of public health, moderated the session, which was held on May 9 in the Cannon House Office Building.

In an overview of American drug policy over the past century, Courtwright observed that it has repeatedly oscillated between “hard” and “soft” approaches. Advocates of “hard” policies favored strict limits on drug production, the outlawing of certain drugs (and the regulation of others), and tough penalties for trafficking and unapproved use. Their most notorious early policy achievement was the passage of Prohibition in the 1920s. In addition to outlawing the sale of alcohol, they also managed to impose a ban on cigarettes in 15 states.

Those who favored “soft” policies preferred limited regulation of drugs, reduced sentences for users, and the medicalization of drug policy. For example, they advocated methodone maintenance over abstinence for heroin addicts. The early 1970s were “the golden age” for the “soft” approach, which was codified in the Controlled Substances Act of 1970. Yet there was soon a resurgence of “hard” policies, culminating in “the war on drugs,” with its emphasis on abstinence (Nancy Reagan’s “just say no” campaign), zero tolerance, and the mass incarceration of users, especially from minority communities. Today, the “soft” approach is ascendant again, especially with respect to marijuana. Courtwright noted, however, that the current opioid addiction crisis has shown the dangers of a poorly regulated drug market—a problem that the legalization of marijuana may well accentuate—and concluded that the policy pendulum might soon swing back in favor of a “hard” stance on drugs.

Keith Wailoo focused his remarks on the economic forces that have shaped the use and abuse of pain medication in America. He argued that the ongoing search for a replacement for morphine has resulted in a recurrent boom-and-bust cycle in pharmaceuticals. When new drugs (Demerol, Oxycontin, and so on) were developed, they initially generated high hopes and big sales, but before long the drugs’ side effects and unintended consequences produced legal and regulatory reactions. This cyclical pattern was—and remains—a product of the market’s predominance in approaches to pain treatment.

Economic forces have shaped the use and abuse of such drugs in several other ways. Wailoo noted that the overuse of pain medications has been especially prevalent in rural areas that have fallen on hard times in recent decades, indicating a correlation between economic decline and the overuse of opioids. In addition, the health insurance industry has preferred pharmacological solutions to the problem of pain because drugs are cheaper than integrated pain management strategies. As cost containment pressures increased in the 1990s, so did prescriptions for pain pills. The current opioid crisis is merely a difference of degree from the prescription pain medication crises that preceded it, not a difference of kind. Unless and until market forces cease to shape the treatment choices for patients seeking relief from pain, Wailoo expressed skepticism about efforts to legislate lasting solutions to the problem of opioid addiction.

While Wailoo and Courtwright focused on different aspects of drug policy and drug addition, both of them noted the historically cyclical nature of American drug policy. Courtwright argued that these cycles are products of the ideological preferences and political pressures that give rise to “hard” and “soft” policies, while Wailoo emphasized the economic forces that drive these fluctuations. They agreed, however, that the tension between free market and regulatory impulses have been an enduring feature of the United States’ attitude toward drugs. Will efforts to control the current opioid crisis cause the pendulum to swing in a new direction? Perhaps, but the historical perspectives provided by Courtwright and Wailoo left their audience with little reason to anticipate any real break from the cyclical pattern that has marked American drug practices and policies for a long time.

The National History Center’s Congressional Briefings program aims to provide members of Congress and their staff with the historical background needed to understand the context of current legislative concerns. A video of this congressional briefing on the “History of American Drug Policy and Drug Addiction Epidemics” can be found here: https://www.youtube.com/watch?v=fWSyZKrTgTE