Slavery on Film: Why Now?

Over the past few years, several movies and television shows have delved into the history of slavery in the United States. From the dramatic (12 Years a Slave and Django Unchained) to the comedic (Key & Peele), slavery has been re-introduced as a theme in American popular culture. In January 2015, NBC announced that it would air an eight-hour miniseries called Freedom Run, based on Betty DeRamus’ 2005 book Forbidden Fruit: Love Stories from the Underground Railroad. In May 2016, HISTORY, Lifetime, and A&E will air a remake of Alex Haley’s Roots. And WGN America premiered Underground, a 10-episode series about the lives of African American slaves on a southern plantation and their harrowing quests for freedom, on March 9. 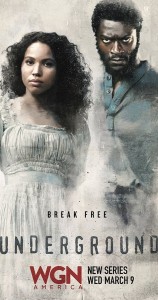 A promotional image for the WGN series “Underground.”

Another addition to the list is the highly acclaimed and highly anticipated film by writer-director-star Nate Parker, The Birth of a Nation. Though the film’s title harkens back to D.W. Griffith’s 1915 white supremacist movie of the same name, Parker’s drama offers a new interpretation of the August 1831 slave revolt in Southampton, Virginia, led by Nat Turner. At this year’s Sundance Film Festival, the movie won two major prizes and sparked a bidding war between top movie studios. Shortly after, Fox Searchlight paid a record $17.5 million for the film’s worldwide distribution rights, rivaling competitors such as Sony Pictures and Netflix. It will be released on October 7, 2016, and movie critics expect the film to be a strong contender for Oscar glory in 2017. It is worth noting that Fox Searchlight distributed 12 Years a Slave, which grossed over $187 million worldwide. Thus, it’s not surprising that Fox Searchlight outbid competitors to control distribution rights for Parker’s film.

So, why now? Why has there been a renewed interest by filmmakers to marshal projects about slavery to movie theaters and televisions nationwide and for studios to fund them? Perhaps it is because at this time in American history, as the Obama era comes to an end, we as a nation are contending with the failed idea of a “post-racial” America. Certainly, the Obama presidency has made America’s unresolved issues with race and racism very public.

The Black Lives Matter movement in particular has used social media to highlight instances of continued racial discrimination against people of color in the United States. Police brutality has been front-page news with the tragic deaths of Trayvon Martin, Eric Garner, Sandra Bland, and many others. At the same time, college students have reconceptualized the civil rights mantle to protest racism and white supremacy on their campuses. All this is happening in the wake of the financial crash of 2008, which exacerbated economic inequality along racial lines in the United States. Finally, the 2016 presidential election has provided an open forum for candidates and voters alike to express publicly—and without fear of retaliation—their deeply held beliefs about racial, ethnic, and religious diversity. So perhaps the safest space for some viewers to contend with the complex history of slavery and race in America is before a flat-screen television, through streaming movie websites, and in the comfort of movie theaters. Viewers are showing their interest in such projects and the tough subjects they tackle with their financial support and their attention.

A promotional poster for the forthcoming series “Roots.”

Consumers have increasingly proved willing to watch and support projects about America’s peculiar institution. 12 Years a Slave and Django Unchained brought viewers to movie theaters, fared very well among critics, and earned substantial profits at the box office. Their successes have led a push for artists to bring slavery to the fore of American entertainment. Backed by deep financial coffers, writers, directors, and actors have offered more vivid, and perhaps more historically accurate, representations of slaves’ lived experiences in the United States.

That is not to say that previous representations have failed to depict American slavery accurately. For example, Alex Haley’s Roots, which debuted in 1977, showed the harrowing experiences of enslaved Africans in the trans-Atlantic slave trade and the challenge that enslaved African American people faced in making and maintaining familial bonds. Even films such as Mandingo (1975), Glory (1989), Sankofa (1993), and Amistad (1997) offered differing portrayals of enslaved peoples’ lives in bondage. However, these films did not have the wide-ranging consumer or box office draw as their more modern counterparts. Perhaps some viewers were not ready to confront slavery on the big or small screen.

Even now, however, slavery and racism are difficult topics for conversation. Indeed, the twin engines of slavery and racism continue to foster social unrest as people contend with, often in violent ways, America’s original sins. Yet, it is important to remember that viewers approach these questions, and these projects, from multitudes of perspectives. There are those who seek to understand this nation’s complicated racial history and want to know how slavery fits into that history. They might watch these films and shows hoping to gain a greater appreciation for how slavery has influenced racism in American society today. Then there are others who possibly come to these projects wanting to distance themselves from the tragedies of modern racism and discrimination. They may ignore the Black Lives Matter movement, instances of racial microaggressions, and broader realities of institutional racism around them. But, in supporting these projects financially, they can joyfully embrace the idea that we, as a nation, have evolved from our tragic history. (After all, we no longer hold people in bondage . . . except if you are convicted of and are incarcerated for committing a crime.)

For those of us who study and teach the history of North American slavery, these films offer useful teaching tools to help students better understand the complex history of slavery. They can spark meaningful conversations among students about how the history of slavery in the United States has influenced racism and racial inequality today. It is clear that the only way to deal with the ramifications of America’s dark past is to confront it. Indeed, a historical understanding of how slavery has influenced every social, legal, and economic institution in America is essential to create more effective policies to combat modern injustices. If these films help us as a body politic to engage in more productive dialogues about the nation’s fraught history, then they are worth the money that we spend to see them. 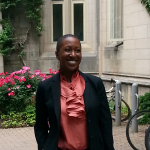 Justene G. Hill is a historian of American slavery. She completed a PhD in American history from Princeton University in 2015. She is currently the program coordinator of the National History Center’s Historians on the Hill program. In August, she will be joining the University of Virginia as assistant professor of African American history.