Historians in academia saw little, if any improvement in their wages over the past academic year, as average salaries for regular full-time faculty at most ranks grew by less than 1 percent according to a new study from the College and University Personnel Association for Human Resources (CUPA–HR). This represents the smallest average increase in salaries for historians in 15 years.

To make matters worse, the report also reinforces the dismal evidence in the AHA’s recent job report. The CUPA–HR data shows a 30 percent decrease in year-to-year hiring of new assistant professors—the largest such decline in their tabulations (stretching back to the 1984–85 academic year).

These findings are available in the CUPA—HR’s 2009–10 National Faculty Salary Survey, which reports on the 9- to 10-month salaries (excluding other forms of compensation and benefits) of full-time faculty. The numbers are derived from salaries in place as of October 2009, but these are based on the contracted wages, thus possibly excluding information about the effect of recent furloughs at many institutions.

History generally kept pace with the rest of academia, at every rank—growing faster than the average for all fields at the full and associate professor ranks, but lagging slightly in the growth for assistant professors.

The staff at CUPA–HR note that even a small growth in the salaries should be seen as a positive sign at a time when the Consumer Price Index for the past year was negative (indicating that the costs of goods and services fell by 0.4 percent). But many historians caught in the midst of widespread salary freezes and furloughs are undoubtedly wondering where these gains are occurring. Indeed, the authors of the survey do report that almost one-third of all faculty members in continuing positions saw a decline in their salaries, though they do not provide a specific estimate for historians.

The report indicates, moreover, that history is among the lowest paid disciplines at public colleges and universities—trailing behind all but a few other disciplines at all ranks, from full professor to the instructor levels. This places history among a small number of humanities disciplines (such as the languages, religion, and the arts) at the lowest end of the academic salary scale. History also has the fourth lowest average entry-level salary among the disciplines.

Digging deeper into the data shows the wide variation among salaries for historians—the lowest paid instructor in history (at least among the surveyed institutions) earned just $12,000. In comparison, the highest paid full professor earned $205,624—17 times that of the lowest paid full-time faculty member in the discipline.

Even allowing for wide variations by locality and institutional type, this is the sharpest difference between the top and bottom rungs of the history salary ladder ever reported in the CUPA—HR salary reports. In comparison, 20 years ago the highest paid history professor received five times as much as the lowest paid full-time faculty member. 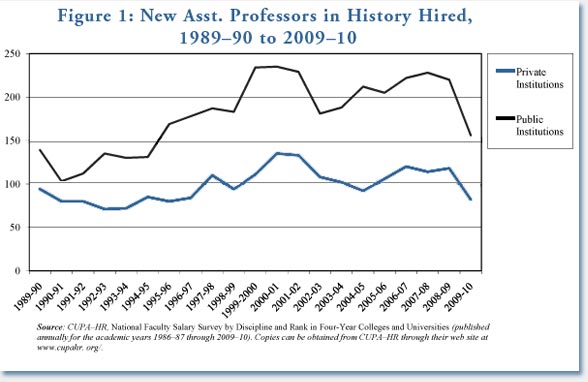 The data in the CUPA—HR reports also tracks the alarming decline in the amount of hiring taking place in academia. The number of new assistant professors in history hired for the 2009–10 term was 30 percent lower than the year before, at both public and private institutions. And the number of departments hiring was also down by 28 percent. These numbers are in line with the decline in job advertisements reported by the AHA this past January.

The 693 institutions included in this report hired only 238 new faculty, which was also the smallest number since the mid-1990s (Figure 1). The declines took place at an equal rate at both public and private institutions.