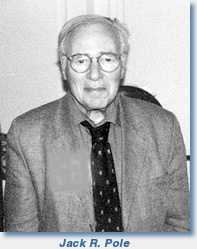 Jack Pole, whose career as a British historian of the United States spanned more than 50 years, died in Oxford on January 30, 2010. He was 87 years old. From his magisterial Political Representation in England and the Origins of the America Republic, published in 1966, to his ambitious Contract and Consent: Representation and the Jury in Anglo-American Legal History, which appeared a few weeks before his death, Pole explored with perseverance and perceptiveness the English roots in the growth of American law and politics.

His many books including Political Representation, Paths to the American Past, The Gift of Government: Political Responsibility from the English Restoration to American Independence, The Decision for American Independence, and Equality, Status, and Power in Thomas Jefferson’s Virginia, focused on the nation’s founding era. With Political Representation, Pole joined in the republican revision of the founding era, seeking to understand the Revolution and its rhetoric in terms that the participants understood. He examined in it the politics of representation in Massachusetts, Pennsylvania, and Virginia, merging institutional, intellectual, and political history. Here, as in many of his works, he brought his knowledge of British history to bear on critical decisions made in the new nation.

Among his many books, The Pursuit of Equality in American History, which came out in 1978 (with a new edition in 1993), was the outlier. It spans the entire sweep of American history and traces the fortunes of equality from its conceptual appearance in the revolution through the 19th- and 20th-century quests for equality. He examined how commitments to equality affected the practice of religion, racial discrimination, the ascent of women’s political activity, and efforts to equalize access to education and even income. Bringing his sophistication as a historian together with his intimate understanding of the law, Pole produced an American classic.

Contract and Consent (published by the University of Virginia Press just before Pole’s death) is very much a work of legal history, and takes Pole back to his old interest in representation, here joined with a long exegesis on the jury system as it has operated in England and the United States.

Scholars for generations to come are going to whisper thanks to Pole for his annotated edition of The Federalist Papers, which came out in 2005. Here he tracked down the plethora of allusions that Hamilton, Madison, and Jay—never loath to display their erudition—made in their essays, whether they refer to an Augustan poet, a pamphleteer in contemporary Pennsylvania, or the League of Cambrai formed against Venice in 1508.

Pole grew up in the Hampstead area of London. Back when “Downtown” was a big hit, he allowed as how he had met Petula Clark [and many entertainers] through his father, who headed the London publicity office for United Artists. Much to his great pride, his mother, Phoebe, had been a suffragette, a fact he would share along with a short explanation of the difference between suffragettes and suffragists. When she died, her member of Parliament, Margaret Thatcher, wrote Pole an appreciative letter.

Seventeen years old when England entered World War II, Pole served first as an anti-aircraft officer at Scapa Flow in the Orkney Islands. He then became part of the Gideon Force that fought alongside irregular Ethiopian forces against the Italians whose occupation of Ethiopia, Eritrea, and Somalia threatened British supply lines through the Suez Canal.

Following the war, Pole read history at Oxford and then went to Princeton for doctoral studies. At this time he became a close friend of Richard Hofstadter. Returning to Great Britain, he became a lecturer at University College London, followed by a position as Reader in American history and government at Cambridge. In 1979 the University of Oxford named him Rhodes Professor of American History and Institutions, a post he held for a decade. Pole’s erudition astounded. He could—and would—quote lengthy passages from any of Shakespeare’s major plays or describe in great detail the nature of tort proceedings in 17th-century Scotland. His mind was a store of knowledge, but also of wit and wisdom.

One of his major contributions to historical knowledge came from the reforms he initiated at Oxford where for years the only American history subject open to students was on the Civil War, a choice which may have reflected lingering bitterness at the colonial upstarts. Pole added a number of options and was particularly proud of the new courses on slavery and the American civil rights movement.

Pole’s career was by no means confined to academic concerns. He was a pretty good painter. This near-passion enhanced the way he took in the scenes around him. The finer points of technique would vex Pole like making boats in a seascape look like they were in the water instead of riding on top. During his last decade or so, Parkinson’s disease began to take its toll on his mobility. He discovered that stippling the paint instead of making brush strokes would accommodate his changed condition, and so he continued to paint.

Cricket probably consumed more of his adult attention than scholarship. Introduced to it as a school boy, Pole organized his own team after returning to England to begin teaching. The Trojan Wanderers, as the name suggests, was a somewhat nomadic group with a changing line-up. For one game, Pole pressed into service a visiting scholar from India who wracked up an astonishing score of 60 in a very few minutes. It was after the game that Pole learned that he had misunderstood the visitor. He thought that he had said that he had played a bit of cricket in India, instead of a bit for India.

Friendships were important to Pole. He devoted to them the same attention he brought to his scholarship. More than loyal, he wanted to see his friends prosper and did everything in his power to see that happen. Countless young scholars benefitted from his interest and generosity.

It was hard to spend much time with Pole and not build up a bank of anecdotes about him, for he had a natural sociability laced with a readiness to laugh and a capacity to see what was funny in very ordinary situations. I remember well once being on my back porch where I had a defective telephone. The number 6 wouldn’t register. Pole was sitting there lazily in the sun when he realized that he was supposed to call a friend in Italy. He brought out his address book and could hardly contain himself when he saw that the 15-digit number he had to call had no 6’s. He would be able to telephone Italy without moving.

Pole’s two daughters, Ilsa and Lucy, his son, Nicholas, and his companion and fellow scholar, Janet Wilson, kept a 24-hour vigil during his fortnight stay at the hospital.