Controversy in the Classroom 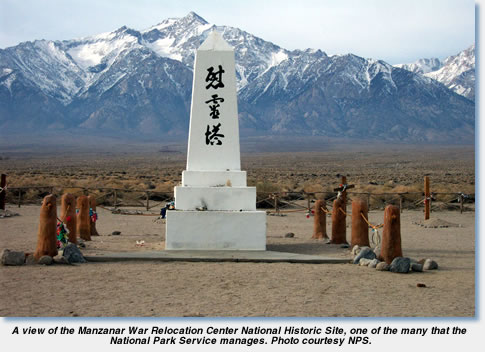 What makes something “controversial” for, or at, sites in the National Park System? Does what makes a “controversy” in a park differ from what constitutes “controversy” in a standard classroom setting? Parks can be classrooms, and, at least potentially, they are also laboratories for research. Almost always, though, the NPS presence is just one piece of a mosaic on a landscape that has multiple meanings as a site of memory, commemoration, and ceremony for communities local and distant. These multiple presences on the land may coexist without tension and even prove mutually enriching, but sometimes they jostle each other for space or political advantage.

Sometimes “controversy” ensues when different groups, each with a stake in a given park, disagree about interpretative emphasis or priorities. Often, a topic gets tagged “controversial” within NPS because its honest interpretation by the NPS requires raising questions about how we arrived at a status quo or perpetuated a particular set of power relationships. Sometimes the issue involves challenges to widely accepted and long-cherished notions about national, community, and even personal identities in the United States. Of course, these issues also arise in classrooms. NPS sites, though, by their very nature, present major opportunities for fostering broad public, civil, civic conversations about how we got where we are today, as a nation and as individuals. National parks “belong” not only to the American public at large, but also to the many communities for whom they are or have been places of work, play, and worship. Like public school systems, but in even more public, exposed ways, parks have potential as places where the public can examine and illuminate questions that divide us. Parks are locations for civil conversation at a moment when much of the national media is dominated by loud commercial and demagogic messages.

NPS sites are classrooms in some ways but NPS interpretive efforts and products obviously also differ from those of primary and secondary schools, colleges, and universities. People who participate in standard NPS interpretive programs seek out NPS sites for many and varied reasons, but they are rarely making a park visit because they need a grade or credit hours for a degree. Most of them have elected to come to a park for an experience that is both educational and recreational (possibly even inspirational), and their time there may be relatively short. Unlike most classroom teachers, NPS staff often have limited time to scope out what visitors already think and know about the past, and to foster an environment conducive to learning. The best NPS interpreters gain skill at assessing a given audience quickly, to reach that audience initially “where they are,” as one NPS interpreter puts it, in order to create opportunities for visitors to gain broader perspectives and fresh insights.

Demographics for standard NPS interpretive efforts are different from those of classrooms in many ways that reflect the elective nature of park visits. The audiences for most formal NPS interpretive and museum programs embrace people of all ages, and very often include family groups. Still, especially in non-urban parks, park visitors may not reflect the racial, ethnic, or class demographics of the nation or of communities surrounding a given park. Just as many colleges and universities continue to strive for “diversity” in student bodies, NPS has much work to do in that area. Sometimes groups with traditional ties to parklands have been, figuratively speaking, invisible to park staff. NPS sometimes also ignores the needs of some potential visitors in favor of others, as has historically happened for decades in the NPS approach to interpretation at Civil War battlefields. That war, emancipation, and Reconstruction are among the major turning points of American history, but many NPS sites, historically, have focused their interpretive and educational efforts on battlefield tactics and strategies, at the expense of serving visitors who might want to think about why the war broke out and how it shaped the society we share today. This reluctance to interpret the causes and consequences of the Civil War has, of course, shaped visitor expectations about the kinds of experiences available at battlefields in NPS stewardship. While NPS will and must continue to serve visitors who want to immerse themselves in stories of combat, it has taken steps and must keep making strides to serve also visitors who are not already steeped in Civil War history and want to ask other kinds of questions about the meanings of that remarkable carnage. This latter effort seems likely to be a key to broadening visitation at such battlefields, but it is also critical to the credibility of NPS as an educational institution. This is not a matter of substituting one emphasis for another. Rather, it entails providing a broader array of interpretive experiences for visitors to engage. There are those who argue that NPS at Civil War battlefields should limit itself to the commemorative voice, to “honor” the slain. To me, this is like saying that at, say, Yellowstone, NPS should only point to the beauty of the scenery, but avoid talking about the geological and ecological processes that produced and shaped that landscape.

Another obvious major difference between an NPS historic site and the standard classroom is the opportunity for direct contact with places—landscapes and buildings—that have been evaluated as “nationally significant” by Congress and the NPS. The concept of “national significance” can be a terrible straitjacket as a framework for educational programming, and often embraces only one aspect of these many-layered park landscapes. Within the NPS its application has broadened somewhat in recent decades to embrace not just political and military events (the “great men and great battles” and “westward expansion,” for example) but also sites that reflect significant economic, social, and cultural processes and trends. As a result, NPS can do more to tell “big stories in small places” and can do much more than convey the standard grand, national narratives that were the stuff of most classroom history back when many present-day visitors were in high school.
There remains, though, in the minds of many in the NPS, some tension between interpreting the specifics of a given park’s history—what makes that place “special”—and placing the site in the broadest historical contexts—economic, social and cultural as well as political and military. Part of this tension stems from the short-term nature of the experience of many park visitors at any given park. Part of it, though, I would argue, stems from this: while many NPS interpreters are experts in telling the stories of their own parks and have devoted themselves to making their extensive knowledge accessible to visitors, not all of them have the kind of training in history and historiography that would make them equally skilled in conversation about larger historical issues and questions that are important contextually for understanding a given park.

The particularities of a given park and its landscape are treasured, and can be keys to making history fresh and vibrant for visitors. Still, NPS interpreters and historians, perhaps even more than most classroom teachers, need broad grounding in the many currents (and current literature) of American history, so that they can respond to visitors’ “so what” questions about a park, and so that they can make the wisest choices about what they highlight, and what they may not have time to discuss, in a given program. In NPS discussions of “controversial” subjects at NPS sites, interpreters are most successful when they are able to respond to challenging questions by talking about what we know, and don’t know, about the relevant issues, and how we know what we think we know about the past. This includes acknowledging and exploring questions about the kinds of historical evidence available to us and how that evidence can be interpreted, sometimes in different ways by people of good will. It is important for NPS interpreters and historians to be able to discuss historical ambiguities, rather than seeing their role as providing “authoritative” answers to historical questions just because they are wearing a uniform of the federal government. Sometimes, NPS interpreters persuade themselves that the “average” visitor is intolerant of ambiguity, but I would argue that park visitors deal with conflicting or fragmented evidence, competing priorities and uncertainties every day in their own lives, and that NPS staff should not assume that visitors expect or want history to be tidier than real life.

This, of course, raises the question of “balance” in presenting “controversial” issues in public programs in parks. “Balance” in those settings must be conceived in the light of fairness. It is not enough simply to recount the fact of a disagreement in addressing, for example, an issue like the denial of the centrality of slavery to the reasons Southern states seceded in 1861. For many “controversial” aspects of park history, the “controversy” stems not from questions about standards for selection and interpretation of historical evidence, but rather from someone’s felt need to affirm the rationality or justice of particular present-day social, political, or economic conditions. In those cases, honest representation of historiographical issues can be the NPS’ best way to create spaces where we can have dialogue rather than shouting matches.

I would argue that well done history can open hearts, minds, and eyes to possibilities for building a more just society. When people understand in historical depth that present conditions developed out of specific past actions and conditions, they are more likely to see that those conditions were not inevitable and are not immutable. Given how many historical national parks were established to foster ideas about national identity in the service of “patriotism,” it is understandable that honest historical interpretation by NPS of, for example, the Reconstruction era, might be seen by some people as a serious official and federal challenge to racialized aspects of the status quo, and thus stir up “controversy” more often than classroom teaching or published historical monographs. The potential of NPS areas to serve as safe spaces for discussing painful topics is enormous. Living up to that potential requires NPS to foster not only a staff with good training in history, but also the uses of parks by the public at large for civic engagement and the kind of civil dialogue that generates light, not just heat. Parks are places where people can learn about the historical experiences of folks they may ordinarily see as “other,” and can try to see beyond the limits of their personal experience, in order to gain broader perspectives for understanding and navigating this society we share. When that kind of reflection, in the service of attempts at mutual understanding, results in “controversy,” that’s a good and healthy thing.

Laura Feller retired recently after serving as a historian for more than 30 years in the National Park Service.