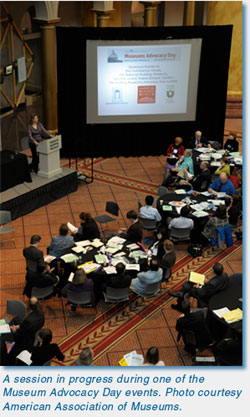 On Monday, March 22, 2010, more than 200 museum directors, curators, staff, trustees, and students gathered at the National Building Museum in Washington, D.C. for the second annual Museums Advocacy Day. On March 23, they met with staff from 219 congressional offices, representing 40 states, to urge legislators to support museums. The event was sponsored by the American Association of Museums (AAM) in collaboration with more than 50 other sponsoring organizations, including the AHA.

The first day of the meeting was dedicated to policy briefings and training sessions designed to teach attendees to be effective advocates. AAM’s first priority is securing a $15 million increase to the fiscal year 2011 budget for the Institute of Museum and Library Services (IMLS) Office of Museum Services, to bring its total budget allocation to $50 million. The budget for IMLS, the primary federal agency making grants to museums, has remained relatively flat since 2003. Current allocations allow the agency to fund only a small percentage of grant applications. Acting IMLS director Marsha Semmel briefed participants on the agency’s current projects, which included a new initiative entitled “Museums, Libraries, and 21st-Century Skills.” The project documents museums’ role in workforce development, education, visual literacy, and civic engagement, skills citizens need to “thrive and survive in the global knowledge economy.” A report is available online at imls.gov.

Participants also asked legislators to ensure that the proposed Elementary and Secondary Education Act avoids the unintended consequences of the No Child Left Behind Act, which it succeeds. Museum educators hope the new legislation will reverse the steep decline in school visits that occurred under NCLB, and leave room in the curriculum for history, art, and environmental education. Jackie Gran, senior adviser to the assistant secretary for planning, evaluation, and policy development at the Department of Education, assured participants that the legislation will encourage experiential learning, collaboration between schools and museums, and a “well-rounded” education. She urged them to review the administration’s “Blueprint for Reauthorizing ESEA” at ed.gov.

Advocates also urged Congress to restore funding for the Save America’s Treasures and Preserve Americas Treasures grants, which the administration proposed eliminating.

Senator Richard Durbin (D-IL) was the featured speaker at a Tuesday congressional kickoff at the Russell Senate Office Building. Senator Durbin used the story of ledgers containing payroll records for the first Senate found during construction of the Capitol Visitor Center to argue that “if we are not vigilant about preservation, our history, and our heritage, we are going to lose priceless treasures.”

Referencing recent changes to the Texas history curriculum, he noted that the ledger included the signature of Thomas Jefferson, “acknowledged to be one of our nation’s great heroes in 49 states.”) Durbin described childhood visits to an art museum with his mother to illustrate “the vital place of museums in our children’s education” and the need for continued federal support for museums and the arts.

Representative Carolyn Maloney (D-NY), sponsor of legislation to create a national women’s history museum, entertained the audience with the story of how she fought to return the women’s suffrage monument, stored in a basement since 1921, to the Capitol Rotunda. Representative Maxine Waters (D-CA) and Representative Rush Holt (D-NJ) expressed support for the advocacy effort.