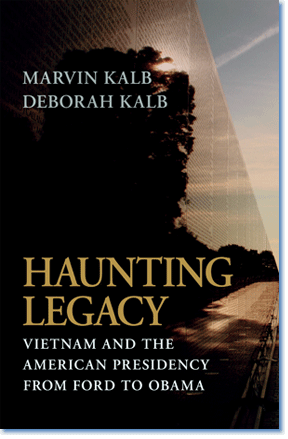 One of the many things historians get from journalists are great quotes, and Haunting Legacy: Vietnam and the American Presidency from Ford to Obama by the father-daughter team of Marvin Kalb, former CBS and NBC reporter, and Deborah Kalb, a veteran Washington journalist, is no exception. Take, just for example, an exchange between William Casey, director of the CIA under Ronald Reagan, and Michael Bearden, CIA station chief in Islamabad in 1986, as related by Bearden: "I want you to go out to Afghanistan…" Casey instructed Bearden, "and I will give you whatever you need to win." To win, Casey emphasized to Bearden, not just to entrap the Soviets in another Vietnam but to "go there and win. Whatever you need, you can have." "So," Bearden concludes, "he gave me the Stinger missiles and a billion dollars."

Casey was not alone in supplying Bearden with ordnance to pass along to the mujahidin. "'The important thing to know,' Bearden stressed, 'was how many people in the Warsaw Pact and in China who were willing to sell us Warsaw-Pact ordnance to shoot Russians with.'" Bearden smiled, the Kalbs report, and concluded: "This is such a wonderful world we live in." The Kalbs make it clear that the United States knew Mikhail Gorbachev was ready to withdraw troops from Afghanistan and could have facilitated it. Instead, they write, "it took a more belligerent approach, consistent with the maxim: when your enemy is down, kick him."

Haunting Legacy uses stories like these to make a limited point: like Banquo's ghost, Vietnam was vivid in the political imagination of each administration from Gerald Ford to George W. Bush, and continues to influence Barack Obama. In some administrations the ghost's accusing finger moved the president to military intervention, in others to the avoidance of intervention, and in the case of Reagan, the finger swung around and pointed to both.

On the whole, the Kalbs break no new ground in their analysis of foreign policy in the period the book covers. Historians may, however, be interested in how much presidents have used their own versions of the past in decision making, and how incomplete their picture of the past is. The Kalbs claim that the United States was once "a nation of unlimited vision and capacity," but Vietnam changed all that: "Left in the rice paddies and impenetrable jungles of South Vietnam were more than America's vaunted self-confidence and its sense of idealism: 58,000 young Americans had paid the ultimate price there…." But left in the rice paddies too were Agent Orange, unexploded ordnance (which has killed 42,000 Vietnamese since 1975), tens of thousands of bomb craters, two to three million Vietnamese dead. These are, or should be, part of the Vietnam legacy that haunts America. They have no presence in this volume.

The book has many examples of what happens when we leave out that side of the story—when we are haunted only by our own losses rather than those we inflict and the consequences that may flow from them. Take, for example, the delight George Schultz, Reagan's Secretary of State, expressed over the invasion of Grenada: "'It was the first time we used military force [post-Vietnam],' he recalled. 'After Vietnam it was a shot heard round the world. We were back in the game. We were saying to the people in Angola, everywhere where Soviet advisers and Cuban proxies were, that we were on their side. We will help you.'" Although the Kalbs point out that the shot may not in fact have been heard everywhere, they don't pursue the question further (and neither did Schultz). Was it heard in Angola? What did it mean to be on the side of whomever it was the Soviets and Cubans were opposing? Indeed what did it mean for Grenada itself?

I found the Kalbs' treatment of Reagan's Janus-faced approach—withdrawing the remaining Marines from Beirut after a suicide bombing killed 241 of them combined with military intervention in Grenada—curious. They record in detail the successful efforts of Secretary of Defense Caspar Weinberger to abort a retaliatory strike, authorized by Reagan, against the group alleged to have been responsible for the bombing. The strike had been fiercely supported by Shultz, Casey, and Robert McFarlane, the national security advisor. Weinberger, for his part, was supported by the Joints Chiefs of Staff, who had little desire to bomb uncertain targets in Lebanon.

One might think, given the subsequent history of U.S. bombing of uncertain targets throughout the Middle East, that Weinberger should have been the hero of the Kalbs' story. Instead, they note, with some asperity, that Reagan's expressed "regret and sorrow" about the Marine dead in Beirut was somehow incongruent with "his refusal to act against the terrorists and to rein in his freelancing secretary of defense and end the costly squabbling over foreign policy in his cabinet." They do not speculate about what would have been gained by acting against the terrorists. Here, as elsewhere, larger questions, overall strategic thinking, or attempts to define America's place in the world are overshadowed by a narrow focus on perceptions of American strength with little sense of towards what ends, beyond simple self-assertion, that strength should be used, nor any demonstration that it enhances national much less global security.

Indeed, the Kalbs' treatment, especially of the Carter years, tends towards standard Cold War inflected post-Cold War judgments, most simply asserted: America's perceived weakness led to "aggressive Soviet expansionism" in the developing world and a conviction among policymakers that the Soviets were "winning the global struggle." Hanoi, for the same reasons, "seemed uninterested" in negotiating with President Carter. Both propositions are problematic and the latter, if one consults Vietnamese sources, is inaccurate. But they fit the picture of a defeated America, whose presidents alternately flexed muscle and hid their heads in the sand, until they decided that the way to solve the "Vietnam syndrome" was to simply kick it aside.

A telling example of how the Kalbs approach the foreign policy dilemmas of the post-Vietnam period is their treatment of Carter's failure to resolve the Iranian hostage crisis. They see it as analogous to the final days of the Vietnam War, yet another demonstration of "America's inability to cope with asymmetrical warfare, this time in the form of a challenge from student radicals." The comparison is both far-fetched and irrelevant and their observation that "from a military point of view, the United States could have crushed the Iranian revolution if the Americans had acted decisively" sends retrospective chills down one's back.

They are critical of Carter's inaction, of his placing "so high a premium on saving the life of every single hostage that he seemed to be losing sight of other presidential responsibilities, one of which was the ability, when necessary, to order American military power into action." Carter's "predilection for pacifism seemed to stifle his decisionmaking powers during the hostage crisis." Someone with another, apparently preferable "predilection" might have used military force against the students right away, "recognizing that while several of the hostages might have been killed in the rescue operation, the others would probably have been liberated, and the United States would have shown a degree of toughness and resolve consistent with its superpower status." Their conclusion is offered without elaboration, speculation on the consequences of such actions, or questioning of why the United States would aspire to be that sort of superpower.

The Kalbs' review of the administrations of George H. W. Bush and Bill Clinton ends with the observation: "By the late 1990s, Vietnam was still a force in decisionmaking, but it surfaced in new and odd ways, sometimes a rip-roaring reassertion of old-fashioned American values, at other times as a cautious response to a series of deadly challenges." It is not surprising that journalists, as well as many politicians, express the choices of those years in just this way. However the historians' task is to try to explain why they do so. If the lessons one draws from a bad war are solely in terms of whether to intervene militarily or hold back, rather than an effort to understand why it was fought at all, then—as has been the case—it is likely that more bad wars will be fought in the future.

The later sections of the book are replete with good quotes and the meticulous sorting out of Vietnam-related political controversies: John Kerry's swift boat service, the rise and fall of Stanley McChrystal, and the rise of David Petraeus and what this rise meant for the relationship between Obama and his military commanders. They write sympathetically of the dilemmas Obama has faced and how he saw his choices. All this leads to the judicious conclusion that "Vietnam was rarely the only reason for a presidential decision about war or peace, but it was always there whenever the questions arose about the possible use of American military power."

Marilyn B. Young teaches history at New York University and is the co-editor of Bombing Civilians: A Twentieth-Century History.