Toward a People's History of Climate Change

As I was searching for newspaper articles on the environment in India, an article on climate change and apple production in the Western Himalayas caught my eye. It was about how climate change has affected apple production in India over the past three decades, and how this in turn has affected the livelihood of the apple farmers. I could immediately relate because I could see this change in my own garden. In late summer last year I noticed that there was hardly any fruit on my apple trees because of the harsh winter the previous year. The right winter temperature and precipitation in the form of snow are important climatic factors for the flowering of apples. Any change in temperature or precipitation can affect apple production, which in turn impacts the communities that depend on apples for their livelihood. Apples are an important commercial crop of the Himalayas region; more than 200,000 farmers are engaged in growing them.1 And millions of small farmers around the world depend on seasonal bio-indicators (the annual rhythms of flowering, rainfall, etc.) for the planting and harvesting of their crops. However, climate change has made these seasonal indicators erratic and unreliable, thus threatening the livelihood of small farmers. 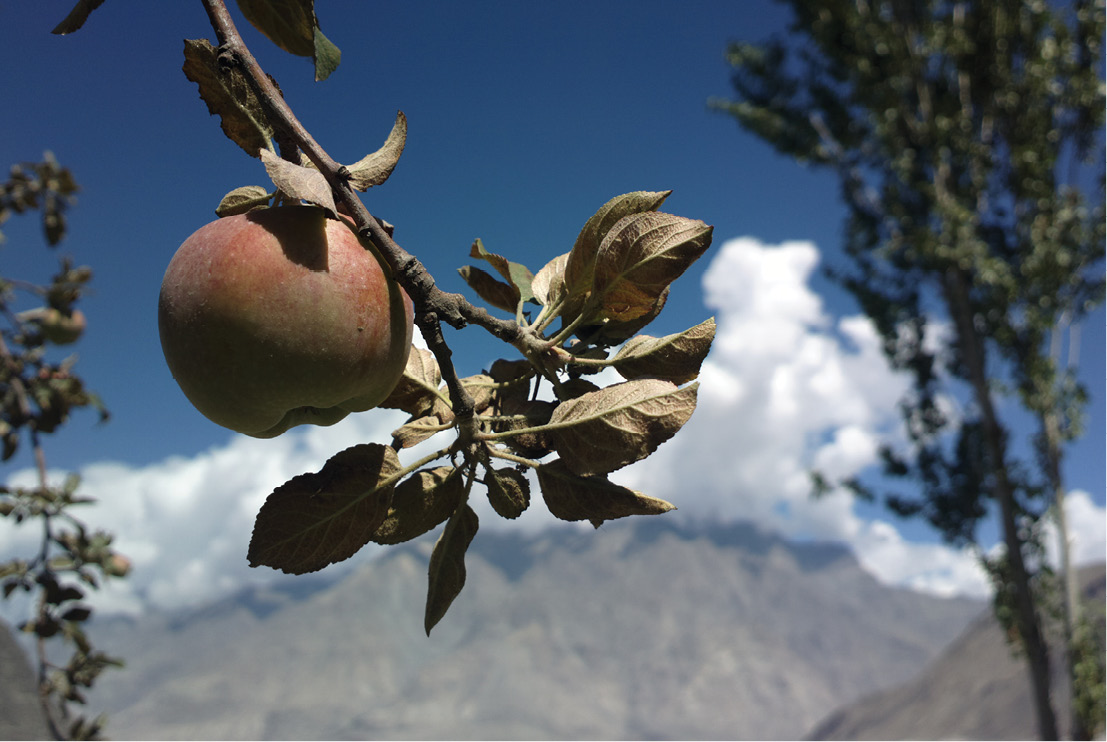 Apple trees grow in Skardu, a town under Pakistani control near the Karakoram mountain range in India.

A people’s history of climate change would start with a focus on a particular sector of ordinary people living and working in a particular place that is undergoing climatic (as well as economic and social) changes. For example, it could be the poor who live in Chicago, which is projected to face severe heat waves more often in the coming decades due to climate change. In the 1995 heat wave, African Americans had a 50 percent higher mortality rate than whites, a figure that may reflect their economic reality. Extreme heat combined with high humidity can be fatal for the old and the frail who do not have access to air conditioning, and lower-income people generally can suffer great discomfort when they lack this amenity.

The second component of a people’s history of climate change would focus on how people perceive the effect of climate change on their lives. This component, of course, would be shaped by where people live and how they obtain their livelihood. People may not use the term climate change per se, but they can certainly describe the climatic changes in their immediate ­environment based on how they impact their lives. For example, Quechua-speaking farmers in Bolivia perceive climate change in terms of the decrease in the number of nights when a frost occurs because they grow potatoes that require nights of frost alternating with days of intensive sunlight to process the potatoes and freeze-dry them.3

The fourth component of my proposed people’s history of climate change would be a study of how people cope with it. As people interact with nature, they develop a knowledge system made up of technologies, beliefs, and skills that enable them to maintain their livelihoods by using natural resources and interacting with the local environment in a more or less sustainable way. For example, Inuit hunters in the Canadian Arctic have detailed knowledge of sea ice, along with a deep familiarity with wind and current conditions that they can use to forecast ice safety. This knowledge allows them to avoid dangerous conditions and travel and hunt successfully. This Inuit knowledge is built through previous experience with thin ice conditions, strong wind currents, etc., and is passed from one ­generation to another through stories, anecdotes, and so forth.

Historians working on a people’s history of climate change would study this knowledge and examine ordinary people’s coping mechanisms and responses to the impacts of climate change over time. One response might be to spatially relocate their economic activities. For example, in the last two decades, due to increasing temperatures in the lower altitudes, the apple farmers in the Himalayas have moved to higher altitudes for apple cultivation. Or people whose livelihood practices are deeply rooted in their culture and religion might respond to climate change through rituals or other religious practices; for example, in Tanzania, when the rains fail, people perform rituals to please the rain god. Other people might respond to climate change by forming social-political organizations to highlight the problems they face due to climate change.

Although some historians have studied the climate in the distant past and its impact on society, they have largely ignored not only contemporary society but also the lives and views of ordinary people in various geographical contexts. ­Anthropogenic climate change is one of the most pressing global environmental problems today. This was highlighted by the recent People’s Climate March in New York City, the largest march for action on climate change ever to be held.

A people’s history approach to climate change will allow historians to develop a better and more in-depth understanding of local concerns about the climate; of how climate change impacts people’s lives over time; and how people respond to these changes. This is my vision. I want to start a dialogue with ordinary people and understand their ideas about climate change before these ideas are lost.

Pallavi Das is an associate professor of world environmental history and modern South Asian history at Lakehead University, Canada. She has published articles on the environmental history of South Asia. Her forthcoming book (to be published in 2015 by Palgrave Macmillan) examines the ecological consequences of colonial development policies in India.

2. Historians have studied climate in relation to societies in the distant past when changes in climate where due to natural causes rather than human activities.

3. S. Boillat and F. Berkes, “Perception and Interpretation of Climate Change among Quechua Farmers of Bolivia: Indigenous Knowledge as a Resource for Adaptive Capacity,” Ecology and Society 18, no. 4 (2013): 21.