On November 5, 1622, John Donne, then rector of St. Paul’s Cathedral in London, gave a sermon that commemorated the day 17 years before when the notorious Guy Fawkes and a group of coconspirators were discovered in their plot to blow up Parliament. In early modern England, where conflicts between Catholics and Protestants shaped much of politics of the period, November 5 had quickly become an important date in the calendar and a moment for reflection on the English monarchy and divine providence. We know the words that Donne spoke on this day because the text was written down and eventually published. What we don’t know is how someone attending the sermon would have experienced it, what he would have heard from any particular spot, the cadences of the preacher, and so on.

On January 2 of this year, 150 attendees at this year’s annual meeting got up early to participate in a workshop on how to get started in digital history. As an introduction, we looked at a few exemplary projects that provided a view of some of the kinds of things that scholars who are new to digital history should know. Projects like History Harvest and Trading Consequences provided examples of the use of several different tools and methods that digital history practitioners utilize. Befitting the theme of the meeting this year—history and the other disciplines—we concluded with a look at the Virtual Paul’s Cross Project. This digital installation and website is a groundbreaking attempt to combine historical scholarship with work from archaeology, architecture, and acoustical engineering to recreate some of the elements of that London morning in 1622. 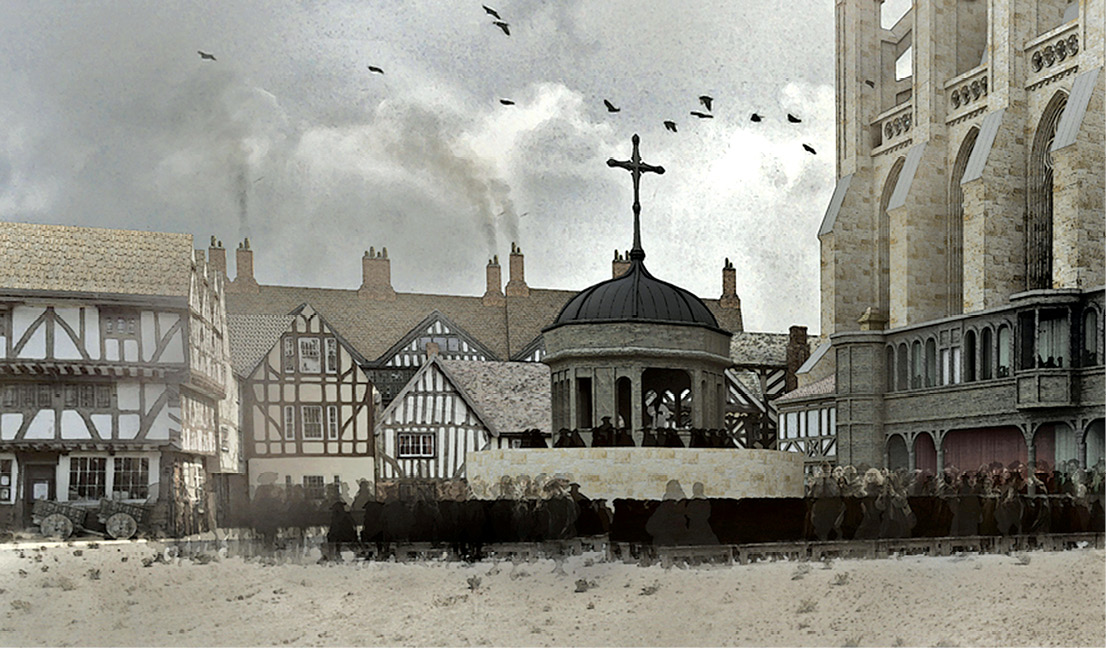 Paul’s Churchyard, from the visual model constructed by Joshua Stephens and rendered by Jordan Gray.

The Virtual Paul’s Cross website models the past. Like all historical work, the project creates representations of the lived experience of historical actors. The website’s 3-D models of the churchyard, the static and moving images that show the view from various vantage points, and the acoustic representations that allow us to listen to the sermon all build a rich descriptive and interpretative framework for understanding.

In common with many digital history projects, Virtual Paul’s Cross has elements that make it both research and presentation. The finished product allows a broad audience to understand what it was like to attend a public sermon in 17th-century London and to experience dimensions the text does not provide. But the development of the models that allowed the scholars to generate what the project website calls an “evidence-based restoration” required extensive syntheses of the history of early modern London. The researchers modeled that day’s weather using historical data and information about current patterns, consulted contemporary accounts of the number of spectators in the churchyard to estimate the size of the crowd, and read descriptions of Donne’s oral sermonizing. The extensive bibliography demonstrates engagement with historical knowledge about the full range of relevant contexts.

I like this project because it shows the possibilities that can be realized by combining ­traditional historical methodologies with those in fields that are much more driven by technology, such as the acoustical ­engineering techniques used in the project. In combining primary sources with secondary literature on the period, this solidly historical undertaking also takes a novel approach to the presentation of scholarship. It makes the most of digital technologies and uses the web to provide descriptive and interpretive elements.

One criticism often leveled at 3-D modeling of historic spaces is the lack of intellectual transparency of the completed model. This is a valid concern. Scholars using such non-traditional tools as Google SketchUp and Photoshop should be thinking about how to make their methods and research conjectures transparent. It is true that the assumptions of the scholar are intrinsic and therefore often hidden from view, but the Virtual Paul’s Cross Project uses its website to explain these methodologies. It makes clear what is known about the space that it models and explains the bases of inference. This allows the user to understand how the interpretive work that is part of all scholarship in history was done. It could be argued that such transparency should be part of all historical interpretation.

This project is an excellent example of a historiographical intervention into a rich scholarly conversation. It furthers our ­understanding of the sermon itself, provides an idea of the experience of attending a sermon of the time, and enriches our knowledge of the wider historical context. It does so using platforms that are divorced from the usual outputs of historians and other humanities scholars. As such it is also an example of the kind of scholarship that departments must take into account when evaluating the work of scholars who are doing digital work. Only by allowing experimentation in both methodology and form, and by expanding our view of practice, can the discipline continue to create history that is both engaging and relevant. Far from merely imagining new business models for journal publishing, or lamenting the demise of the scholarly monograph, projects like Virtual Paul’s Cross evince creativity and place a value on ingenuity as they produce meticulous ­scholarship.

Seth Denbo is the AHA’s director of scholarly communication and digital initiatives. He tweets @Seth_Denbo.

The Virtual Paul’s Cross Project is based at North Carolina State University. The project includes both an installation at the James B. Hunt Library on the Centennial Campus of NC State University and a website that provides an overview of the project, images, videos, and a detailed bibliography. The project received funding from the National Endowment for the Humanities under the Office of Digital Humanities Start-up Grant program. John N Wall, professor of English at NC State, is the principal investigator for the project. David Hill, associate professor of architecture at NC State, supervised construction of the Visual Model, with the assistance and guidance of John Schofield, archaeologist at St. Paul’s Cathedral.