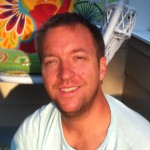 Dr. Shannon Bontrager is a soon to be associate professor of history at Georgia Highlands College in Cartersville, Georgia. His research focuses on the cultural and political history of how Americans remember their war dead from the Civil War to the Great Depression. Once suspicious of PechaKucha, he has come to enjoy it as much as he enjoys pizza.

Posed with the task of constructing a colonial America honors history course for a two-year college classroom, I decided to have my students engage in chitchat. This course had 10 students, ages 16 to 20, with three dually enrolled in college and high school, and one of these had been homeschooled his entire high school career. To reach the different experiences and preparation of these so-called “millennial students” I built a research assignment using PechaKucha (Japanese for chitchat). This format is a 20×20 slide show designed to make digital forms of communication cool for the hipster generation.

Originally held in casual spaces with food and drink, presentations consist of 20 slides on an automated 20-second timer per slide. A single presentation lasts just 6 minutes and 40 seconds, requiring students to present their ideas efficiently. This format privileges ideas and connections rather than formality and syntax. It provided a strategic benefit for my young students who possessed little experience with historical research but strong digital know-how and may be a useful way to teach beginning students more advanced networking, disciplined research, and dynamic presentation skills. It also may be a valuable opportunity for historians to reach out to parents, potential students, and the general public.

The theme for this course focused on the interplay between the history and memory of the Columbian Exchange, the trans-Atlantic slave trade, the British Atlantic world, slavery, the Revolutionary and Civil Wars, and Reconstruction. To complement this interactive class, I constructed assignments that built up to the PechaKucha presentation, which culminated with a final presentation in a reserved room at a Mellow Mushroom pizzeria. Advertised as “An Evening of Pizza and PechaKucha,” the department chair, the vice president of academic affairs, and the president of the college attended along with other invited guests, including many family members. Students chose topics within the scope of the class that critiqued museums, historical artwork, commemorations of battles, and slave interviews.

First, students built annotated bibliographies and project proposals. Once students had identified sources and photographs that they would use, they then built exhibits in ChronoZoom, an online zoomable timeline. This format allowed them to practice transcribing their ideas and their bibliographies into a useful thesis supported with documented evidence without the overbearing formalities of a traditional research paper. From this work they built their PechaKucha presentations.

They performed two rehearsals in which they critiqued each other. Some students literally broke down during the first rehearsal but they diligently improved. I officially graded their work during the dress rehearsal and then they gave their final presentations that evening at the restaurant where each student took a turn performing brilliantly. One student gave her critique of the Etowah Burial Mounds Museum using photographs she had taken while touring the museum balanced against a criticism centered on the cultural history of the museum and the politics of Georgia. Another student used his art history background to de-mythologize the Atlanta Cyclorama as a work of art engaged in active forgetting of the role of women, slaves, and even soldiers who played central roles in the Battle of Atlanta. Another effectively compared the Andersonville Prison and Prisoner of War Museum with a critique of the prison at Guantanamo Bay. Meanwhile, members of the audience voted for respective students in several categories, including “Most Effective Historical Presentation,” “Most Dynamic Presentation Style,” and “Best Overall Slide.” Students were awarded gift certificates and extra credit points for their excellence. All the students were able to win a first or a second place in each category.

This sort of an evening was successful because the students committed themselves to producing high-quality work, but it also facilitated many levels of networking. Students at the beginning of their academic careers demonstrated their powerful intellectual capabilities to each other, to their families, and to faculty members and administrators. An evening of pizza and PechaKucha allowed for innovative dialogues to happen that would not have taken place with research papers. This could be applied to many other settings. Graduate students could organize PechaKucha evenings in casual spaces to share their research ideas and to network with other graduate students from other disciplines across their university. Undergraduates could use this format as a bridge to developing more advanced research skills. History clubs and Phi Alpha Theta chapters could use PechaKucha as a recruiting tool to attract students and build their networks. Colleges and their departments could use the format too as an effective form of outreach with the public. Teaching students to chitchat has many benefits for many different students and can be applied in a variety of formal and casual spaces.