Marx in the Mountains: Poverty and Environment in and outside of the Classroom

What is the relationship between environment and poverty? I asked my students this question at the Middlebury School of the Environment—a new, interdisciplinary, immersive six-week summer program. In my class “Environmentalism and the Poor,” we read scholarship in environmental history, environmental economics, and political ecology. Moving beyond strictly deterministic explanations of poverty (racial, environmental, or otherwise), I encouraged my students to dig deeper into the processes by which people have made (and make) poverty by altering the natural environment and by limiting the ability of others to use and access those environments. I organized the course around what I identify as major themes in any environmental history of poverty: commodities, disasters, dispossession, wage labor, and resistance. I assigned influential books and articles written by labor and environmental historians, and also essays by journalists reporting on these same issues in our contemporary world.1

We also read Karl Marx. My colleagues in New York, where I normally teach and live, had introduced me to Marx. The great 19th-century historian’s insights on the origins of poverty and inequality—on the origins of capitalism—have found a ready audience among today’s generation of graduate students and rising scholars, the so-called “millennial Marxists.”2 But as I prepared to teach in Vermont, I wondered: What would it look like to read and critique Marx at an interdisciplinary environmental-studies school in rural New England in 2014? Would Marx make as much sense here as he does on Wall Street or in Union Square?

Only two of my students had previously encountered Marx. In the post–Cold War American academy, where Marxism is passé, many college students are deprived of the opportunity to better understand how the mode of production (e.g., capitalism) shapes nearly every aspect of human society, culture, and history. My students admitted their interest in knowing more about this: about Marx, his writings, and how they relate to environmental issues past and present. So we read Marx on Mondays, followed each week by more contemporary scholarship and journalism on similar topics. One student, reflecting on our scenic surroundings, called this “Marx in the Mountains on Mondays.”

The first topic we considered was commodities. After reading Ramachandra Guha’s Environmentalism: A Global History; Joan Martinez-Alier’s Environmentalism of the Poor; and Richard White’s essay “‘Are You an Environmentalist or Do You Work for a Living?’: Work and Nature,” all of which argue that poor and working-class people experience the environment differently than wealthy people do, my students got excited about the spotted owl controversy that White alludes to in his essay.3 This led us to a debate on nature’s intrinsic versus utilitarian values. When we read Marx, my students encountered yet another distinction: use versus exchange values.4 We ended up taking a big step backward at this point to talk about the word value itself. Students identified Marx’s definition of value (to paraphrase, the amount of labor socially necessary for a thing’s production) and disagreed strongly with it. What about moral and ethical values? What about nature’s intrinsic, noncommodifiable values? In the ensuing discussion, students realized that truly anything in nature can become a commodity. We had an interesting discussion about the commodification of water, of air, of living things like plants and animals. It is not that nature lacks intrinsic value or even use values, but rather that the origins of environmental inequalities lie in the processes by which natural things are extracted and exchanged not for their own good or for their usefulness to us, but for their exchangeability in the marketplace. One student remarked, regarding the commodification of natural resources, “I never realized that one thing can be so many different things at the same time.” 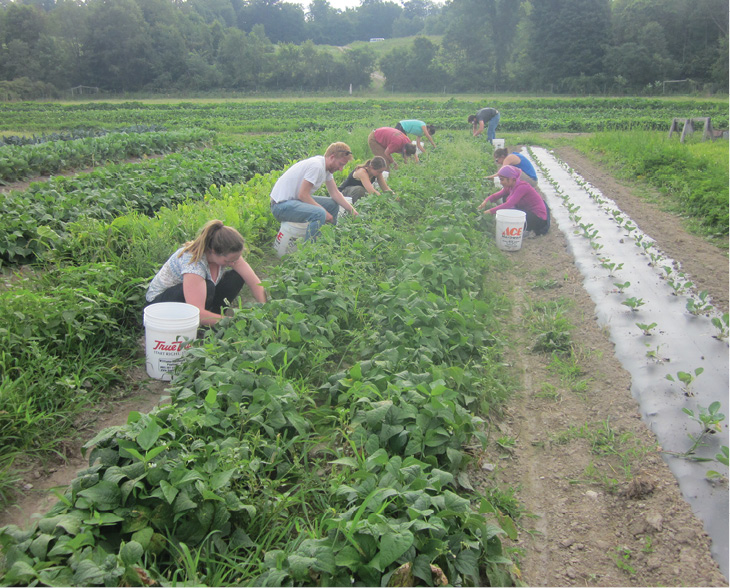 Another lesson concerned what Marx calls “primitive accumulation.” We watched a documentary film, Land of Oil and Water, about indigenous experiences of, and forms of resistance to, oil sands development in Alberta, Canada. This story seemed to directly relate to Marx’s writings on primitive accumulation.5 My students were quick to grasp that Marx’s history of the transition from feudalism to capitalism in England was more than just a presentation of facts and figures; it was a theory of change that could be tested against other places and time periods. So when we read about the great rural-to-urban migration of China’s “floating population,” or about the growth of urban slums, we recognized that modern primitive accumulation creates not just a wage-working proletariat, as Marx had supposed, but also massive amounts of homelessness, unemployment, and participation in the informal economy. Students recognized that environmental histories of “the land” often tell only half the story; they fail to narrate the post-expropriation strategies of landless people. As we watched Land of Oil and Water and learned about aboriginal Canadians’ struggles against economic and ecological exploitation, we were better able to understand their predicament as a legacy of historical (and ongoing) dispossession and settler colonialism. We wondered if Marx would be surprised to see that in 2014 native peoples are still struggling against the same processes he wrote about a century and a half earlier.

While our discussions of Marx often bled into the abstract, I was floored by my students’ abilities to move these ideas off the page. Halfway through the semester, they proposed a service-learning final project that would tie the major themes of our course—environment, poverty, and justice—to a contemporary issue in the local community. They suggested that we spend one day gleaning on a small farm in Rutland County, 30 miles from Middlebury. We drove to the farm at 8:00 a.m. on a Wednesday morning and began our day picking green beans, herbs, and lettuce. In two hours, the eight of us harvested approximately 100 pounds of food that otherwise would have gone to waste. The students connected us with a local nonprofit, Rutland Area Food and Farm Link (RAFFL), that helped coordinate the distribution of our harvest to area food pantries, halfway houses, and homeless shelters. Earlier in the semester, I had accompanied one of my students to a community supper in downtown Middlebury, where a church group each week provides free dinner to approximately 200 people. There I learned that one in six children in Addison County (where Middlebury is located) goes hungry at some point each year. Hunger and poverty are real issues in rural Vermont, and my students taught me to see this through their engagement in service learning.

Back on campus, the students gave a final presentation to the School of the Environment on their gleaning experience. Marx was in their mouths, and I could see the many threads of our class coming together. In making sense of gleaning, they demonstrated that the commodification of food resulted in increased food insecurity among the poor; they talked about the origins of urban poverty in Vermont, where increasing numbers of residents do not have access to the means of production and must rely on either wage labor or state welfare for survival. They explained the market mechanisms of how and why food goes to waste on the farm; and they offered thoughtful solutions for how gleaning, as a form of resistance, can reconnect the working class to a historical, agricultural commons that once provided people with the means of ­subsistence.

It turns out that Marx makes a lot of sense in the mountains. My students helped me think about the links among labor, nature, and poverty in new ways, and reading Marx helped them better understand the linkages between past and present, between city and country, and between labor and capital.6 We also learned something about the dialectic of theory and practice. I share my students’ concerns with hunger and poverty, and we are committed as a class to struggling with these issues. In the ideal college classroom—one in which Marx has a place—students and faculty will realize that the intersections among theory and practice, research and teaching, ideas and materiality are not just the keys to getting a good grade or building a teaching portfolio but are also the keys to making effective change in this world.

G S Rosenthal is a doctoral candidate in history at the State University of New York at Stony Brook and an instructor in environmental humanities at the Middlebury School of the Environment.

1. The syllabus for “Environmentalism and the Poor” is available at http://sites.middlebury.edu/schooloftheenvironment/files/2014/08/Environmentalism-and-the-Poor-syllabus.2014.pdf.

2. Timothy Shenk, “Thomas Piketty and Millennial Marxists on the Scourge of Inequality,” The Nation, May 5, 2014, http://www.thenation.com/article/179337/thomas-piketty-and-millennial-marxists-scourge-inequality.

3. Richard White, “‘Are You an Environmentalist or Do You Work for a Living?’: Work and Nature,” in Uncommon Ground: Rethinking the Human Place in Nature, ed. William Cronon (New York: W. W. Norton, 1996), 171–85; Ramachandra Guha, Environmentalism: A Global History (New York: Longman, 2000); Joan Martinez-Alier, The Environmentalism of the Poor: A Study of Ecological Conflicts and Valuation (Northampton, MA: Edward Elgar Publishing, 2002).

6. See our collectively written document “Forms of Working-Class / Peasant Environmental Resistance,” at The Stream: a Blog for the Middlebury School of the Environment, August 25, 2014, http://sites.middlebury.edu/schooloftheenvironment/2014/08/25/forms-of-environmental-resistance/.