Hit by the Wrecking Ball: Historic Buildings from the Recent Past

In the early 1960s, stained-glass artist Robert Harmon depicted Sacajawea and her son in shades of brown and gray, surrounded by a swirly cactus and peculiar birds. Harmon, who worked with the Emil Frei company in St. Louis, Missouri, produced dozens of mid-century stained-glass windows, the majority for churches. Frei’s stained glass creations have intrigued historic preservationists because of their unique style and modern representations, especially of Jesus’s life. This particular window stood in the Lewis and Clark Library in St. Louis for 50 years, but the building that houses it might be demolished by the time this issue of Perspectives on History arrives in members’ mailboxes.

The library’s board of trustees has made the decision to demolish the building as part of a plan “to improve the library space throughout St. Louis County.” While there are specific reasons for the demolition, it falls into a wider pattern of considering mid-century buildings as obsolete. One after another, these buildings are being threatened or hit with the wrecking ball.

City governments have sometimes argued that keeping such buildings standing would be expensive. In Portland, Oregon, it would cost $95 million to repair Michael Graves’s Portland Building, which has suffered extensive water and structural damage. Likewise, it would cost the Norwegian government $68 million to repair Brutalist buildings that were damaged in a terrorist bombing in Oslo in 2011; known as H-block and Y-block, these buildings contain murals by Pablo Picasso, making it difficult for the government to make a decision about what to do.1 In the end, the decision was to demolish.

Near the centers of cities and in tightly built neighborhoods, buildings no longer in use take up space that could be utilized for much-needed housing. The iconic Shabolovka radio tower in Moscow, only a few miles from the Kremlin, was built in 1922 and has been abandoned. It could be replaced with a 50-story apartment building if it is dismantled.2

Owners argue that buildings they would like to demolish no longer meet their needs. Some survive, but only after being altered beyond recognition. For example, 2 Columbus Circle in Manhattan was built as a 12-story museum in 1964. The “lollipop building,” as one critic called it because of a series of distinctive shapes at its base, was controversial for decades; many New Yorkers found it ugly, but its celebrated architect, Edward Durell Stone, also designed the Kennedy Center and Radio City Music Hall, which gave the building additional value. The museum, called the Gallery of Modern Art, closed in 1969, and the building was subsequently donated to a university, sold to a major corporation, and gifted to the city of New York. It was vacant from 1998 to 2004, when the Museum of Arts and Design acquired it and announced plans to renovate it. The National Trust for Historic Preservation named it one of the country’s 11 most endangered buildings and said that the changes planned “could rob 2 Columbus Circle of its distinctive character and rob America of an engagingly quirky icon of the recent past.”3 The façade was replaced, despite calls to preserve it. 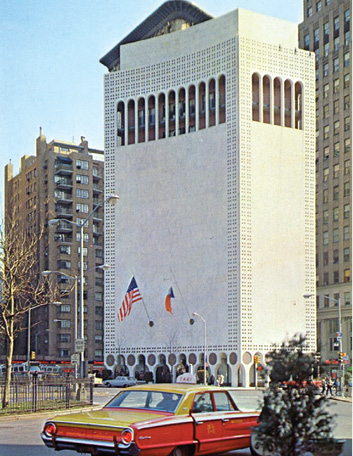 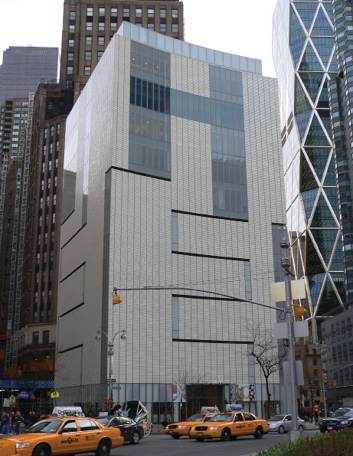 Architect Edward Durell Stone’s 2 Columbus Circle before and after its renovation.

Preservation activists often rally around endangered mid-century buildings to no avail. In October 2013, Prentice Women’s Hospital in Chicago was demolished, despite fundraisers, T-shirts, and awareness-raising campaigns. The famous architect Frank Gehry testified against the demolition, but Northwestern University, which owned the building, argued that the majority of Chicagoans supported the building of a new research center on the site. The university cited a survey in which 84 percent of 504 Chicagoans agreed with the statement “Creating new, high-quality research jobs is an important part of keeping Chicago’s economy strong and growing in the 21st century.” Activists pointed out that the research center could have been built near Prentice Hospital, on a vacant lot also owned by Northwestern.

Built in 1975, the hospital was designed in the Brutalist style, which was created by architect Le Corbusier. Buildings in the Brutalist style, like Prentice Women’s Hospital and H-Block and Y-Block in Norway, are especially susceptible to demolition because they are often perceived to be ugly. In February 2014, the building that housed Third Church of Christ, Scientist, met the same fate in Washington, DC.

Practical reasons in favor of demolition clash with some people’s love for the endangered buildings. Preservation activists see these buildings as representing their memories and their past. Michael R. Allen wrote that Richard Nickel “died a martyr while trying to literally save part of Louis Sullivan’s Chicago Stock Exchange building as it underwent demolition. His death was a milestone in public appreciation of historic architecture in Chicago and nationwide.”4 This public appreciation, while growing, is still not significant enough to save thousands of mid-century buildings all over the world.

Preservation activists working to save buildings from the recent past argue that there is a need for a paradigm shift: when a building is over 50 years old, many developers and building owners see it as old and question its value, but activists believe that such buildings can contain too much history to be razed; this is one argument for preserving the Lewis and Clark Library in St. Louis. 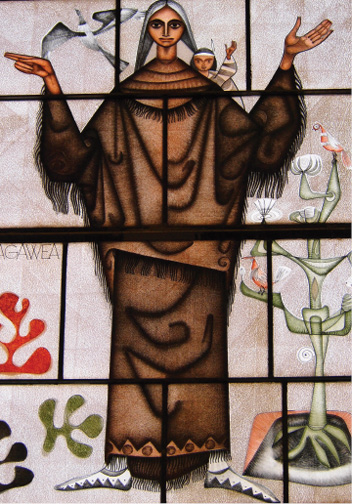 Although the library will be demolished to make way for a bigger building, the stained-glass windows will stay. According to a library spokesperson, they will be installed in the new library building.

Shatha Almutawa is interim editor of Perspectives on History. She tweets @ShathaInDC.