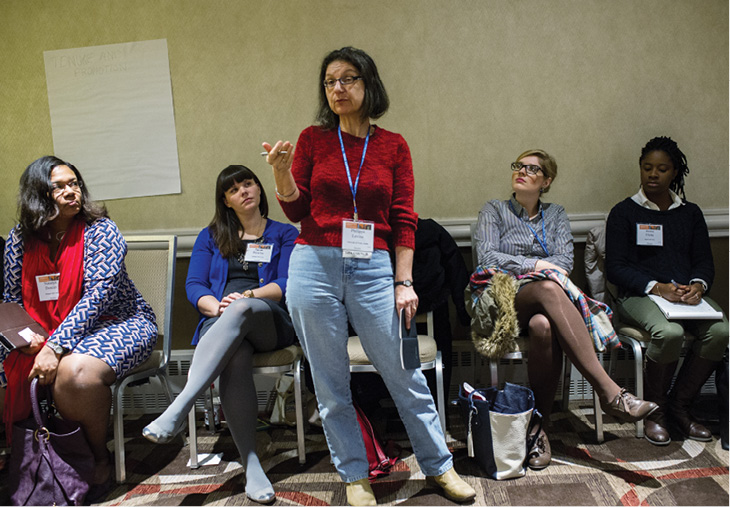 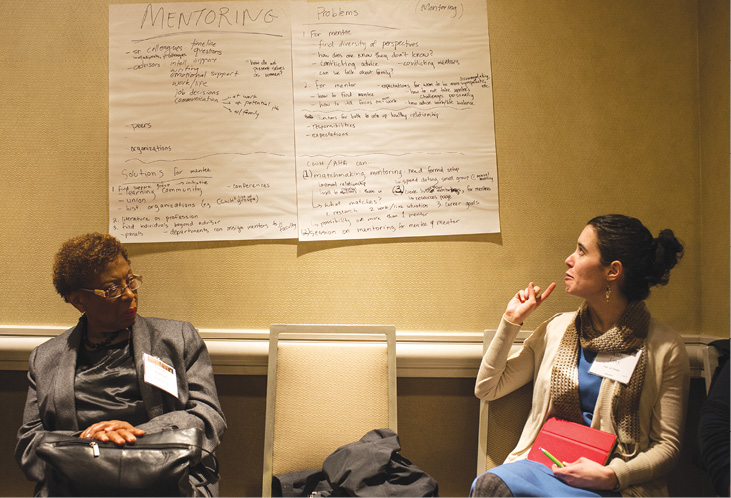 The photo was taken by Marc Monaghan.

A brainstorming session was held after the Committee on Women Historians’ breakfast. Attendees split into groups and discussed work-life balance, preparing for tenure, mentoring, and career diversity.

At the annual breakfast of the AHA’s Committee on Women Historians, Jacqueline Jones, University of Texas at Austin, gave an address titled “Women and Social Justice: What’s History Got to Do with It?”

Jones considered the relationship between scholarship on the history of gender and the current status of gender relations. Citing a book reviewer who lamented that all of the resourcefulness, creativity, and energy going into historical scholarship might be better directed to political activism, she asked whether it is worthwhile for historians to wonder if the work we do as scholars has an impact on the larger society.

Many scholars of women’s and gender history chose their subject because they were interested in understanding the roots of inequality and were fascinated by how hierarchies of difference are embedded into our culture. Yet, while Jones was preparing to testify to the state board of education about the planned adoption of inaccurate, ideologically biased textbooks, she had the discouraging experience of reading an interview with a school board member who said he did not care what academics thought.

Moreover, how, she asked, can historians get our message out to the public, when trade publishers are interested in only a narrow range of historical subjects, primarily military history and biography? The media are interested in history, but tend to privilege immediacy and seek out historical precedents, which can lead to discussions of the past without context. The media prefer brevity and clarity, while historians traffic in nuance and ambiguity.

Given this, she asked, can historical scholarship make the world a better, more just place? She called on her audience to take a generous look at the role of scholarship in the struggle for justice. Even historians who are not actively involved in public history or media outreach teach their students to look at the world in a critical and analytical way. Those who care about social justice need a broad understanding of where we are now, and how we got here. A fuller understanding of the human condition benefits everyone. If we continue to explore the past and in the process reveal why the world is what it is today, by implication at least we also reveal what the future might be.

Debbie Ann Doyle is the AHA’s coordinator, committees and meetings.