Decolonizing the Newspaper: The Historian and the Op-Ed

In a democratic society, debate over ideas and an appreciation for the past are dependent on multiple perspectives. Only recently have the historical vantage points of racial minorities, the gay community, and women, for example, been given increased space by newspaper editors. For me, it is important that intellectuals from a demographic group that has been studied in the past voice a perspective in the present. Otherwise, the discipline becomes a colonial enterprise.

During my doctoral studies at the Claremont Graduate University in the mid-1990s, I was fascinated by the public intellectual prose of historian Robert Dawidoff, which was featured regularly in the Los Angeles Times. His pieces addressed protean questions of civil and gay rights. They were sagacious reflections that linked the past to the contemporary. One 1995 essay—which I use in my undergraduate methods course The Historian’s Craft—critiqued presidential candidate Senate Majority Leader Bob Dole’s attack on the National History Standards. Dawidoff complicated the senator’s election-year call for a symmetrical teaching of US history with a discussion of the historical realities in Dole’s state of Kansas. Dawidoff reminded readers of the civil war in “Bloody Kansas” before the nation’s Civil War and the unfinished pursuit of equality and opportunity 100 years later in Brown v. Board of Education of Topeka, decided in 1954.

As a motivation to draft op-ed essays, I have customized a sentiment expressed in Edward Said’s The Question of Palestine to the experience of Chicanas and Chicanos: “Everyone speaks for Chicanas and Chicanos except Chicanas and Chicanos.” Certainly, people of Mexican origin are not voiceless, but I am uneasy because narratives of the Mexican experience, popular and scholarly, are dominated by onlookers. I am equally concerned when newspapers identify a writer or two to be the lead voices of a group. Hence, I write to “messy” the discussion on a topic involving people of Mexican origin in the United States. 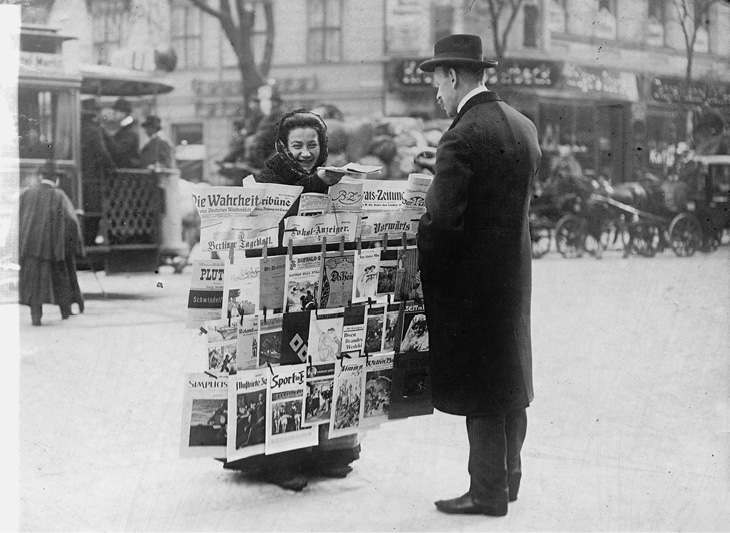 A newspaper seller in Berlin, Germany. The photograph, now at the Library of Congress Prints and Photographs Division, was taken between 1908 and 1919.

In 1996, I submitted an essay to the brand-new History News Service, an informal syndicate of historians founded by Joyce Appleby (a Claremont alum like myself) and James M. Banner, Jr. The piece compared the struggle of Dust Bowl migrants with that of Mexican families targeted by two pieces of proposed California legislation: Proposition 187 of 1994 and Proposition 227 of 1996. The first proposition was designed to deny education and health services to undocumented immigrants; the second pursued the elimination of bilingual education. (The electorate of California passed both initiatives.) I argued that, as with the discrimination directed toward the Joads of the Great Depression, these anti-immigrant propositions arose out of economic despair, this time that of the early 1990s. The essay was nearly accepted by the HNS for its publication online and syndication in print media outlets. My perspective and byline, I thought, were going to run nationally.

But I learned a valuable lesson from this attempt, which was, alas, unsuccessful: follow the directions of editors. The HNS tentatively approved my piece but directed me to pare it down by 200 words, as many newspaper op-ed sections enforced a strict limit of 1,000 words. I extracted 100, believing the balance to be too critical to discard, and resubmitted the essay. I waited for a reply of acceptance that never came. So now when the op-ed guidelines of a newspaper list a word maximum, I do not exceed it.

Since my initial learning experience with public intellectual writing, I have published several essays, largely in the local newspaper of the counties of Kern, Orange, and Ventura in Southern California. And in 2011, the HNS ran and distributed another piece I wrote on the history of Mexican migrant workers and a National Park Service project’s preservation of the stories of this group. My name is now humbly listed among an august group of historians such as Joyce Appleby and others who have written outstanding academic publications and also contributed to a more public dialogue in the popular press.

Although public intellectual writing carries limited weight in the rewards system of academe, especially at R1 institutions, it does have its benefits. First, it can hold accountable the often decontextualized and triumphalist memory of prominent public figures. The past chair of the National Endowment for the Humanities, Lynne Cheney, who led the charge against the National History Standards before Dole, comes to mind, as does former House Speaker Newt Gingrich. Readers also appreciate fearless muses who unequivocally tether the local events of their communities to national currents of the past.

For example, in January 2014 I wrote about a 2013 Dodge Ram truck commercial, titled “To the Farmer in All of Us,” aired during the television broadcast of Super Bowl XLVII. The commercial perpetuated the myth of the Jeffersonian yeoman but ignored wage-earning Mexican ­immigrant farmworker men, women, and children. The scenes in the Dodge ­commercial ­emphasized predominantly a patriarchal, individualist, white ideal of agricultural life. I responded by highlighting how presently in the Southern California county of Ventura, as in the past, immigrants from Mexico dominate the landscape of commercial ­agriculture. And in the nation’s larger history, African Americans (many as slaves), Asians, Europeans, and Native Americans toiled land they did not own.

The piece was picked up by my local newspaper, the Ventura County Star, and by the Bakersfield Californian and several online outlets, one of them the History News Network. Friends in my community and colleagues on my campus have expressed an appreciation for my historical points of view. Receiving such kudos is always nice.

Public intellectual writing also offers a more immediate sense of accomplishment. If a piece is picked up, you see your name in the byline within a week, instead of the months or years involved in the publication of a peer-reviewed article or book. This exercise also increases the reservoir of goodwill you and your institution enjoy in the community. Furthermore, students who read newspapers value the civic engagement of their professors who write op-eds.

Dawidoff informed readers that history itself was becoming more democratic—messy, if you will—with the steady rise of voices once silenced by the forces of power and privilege. To write this peoples’ history, however, more academics need to be civically engaged in their communities, heeding the debates of the present in order to comment on the echoes of the past, both mythic and real.

Frank P. Barajas is a professor of history and Chicana/o studies at California State University Channel Islands. He is also the author of Curious Unions: Mexican American Workers and Resistance in Oxnard, California, 1898–1961.