Medievalism, White Supremacy, and the Historian’s Craft: A Response

Carol Symes’s AHA Today post, “Medievalism, White Supremacy, and the Historian’s Craft,” raises a number of important issues about the impact of recent political and academic controversies on the historical profession. I have long admired Symes’s work, and at the present writing she has graciously agreed to present a paper in a session I have organized for the 2018 International Medieval Congress at Leeds. We share a common intellectual lineage as well: we are both students of Joseph Strayer’s students—she of Thomas Bisson at Harvard, I of Richard Kaeuper at Rochester. She sees many problems with that lineage; I see it as not untroubled but very worth preserving. 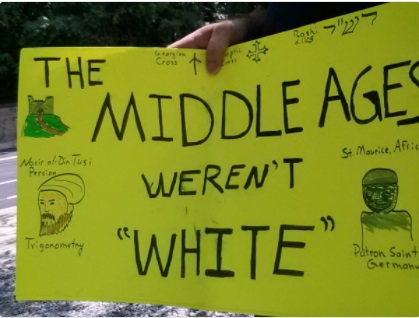 Daniel Franke holds a sign he brought to the Charlottesville protest.

Symes advances three contentions in her post. First, Charlottesville has heightened the moral imperative for historians to change how they practice history, specifically by educating themselves in critical theory while “mov[ing] past preoccupations with individual intentions.” Second, recognizing the modern historical profession’s politicized origins also requires a corresponding change in historians’ practice: “There is no way,” writes Symes, “to do medieval history responsibly without engaging its modern and postmodern entanglements.” And third, critical theory (and medievalism) are essential competencies for the ethical teaching and research of history, especially premodern history. After quoting a recent manifesto by the group Medievalists of Color that demanded this competency, Symes writes, “It is imperative that scholars of the premodern past seriously consider the ethical and intellectual stakes of engaging (or neglecting to engage) these issues.”

These contentions touch on important issues and are worth debating.

Contextually, the debate within medieval studies is far more complex than what Symes presents. The debate has two parts. The first part is reminiscent of the 1990s’ theory wars, and questions any meaningful distinction between historiography and epistemology. Discussions have been complicated by several medieval (mostly literary) scholars insisting, not on the legitimacy of critical approaches per sé, but on critical theory as the only moral way to study and teach premodern identity formation, or premodern history in general. As Dorothy Kim, who features prominently in Symes’s post, put it, “[I]s your Medieval Studies intersectional? If it’s not, it is bulls***.” The Chronicle article linked to in Symes’s post presents critical theory as the way forward for medieval studies, and talks to this same group of scholars. Other scholars, meanwhile, staunchly defend older methods. Many of us cluster around the center.

Why is a way forward needed? The answer leads to the second part of the debate, namely what to make of white supremacists’ use of the premodern past. It is true that neo-Nazi and white nationalist groups do use the Middle Ages as a heuristic for white “ethnogenesis,” and that they have been specifically targeting college campuses. Indeed, more than one alt-right organization actually began on a college campus. The pieces from the New Republic cited by Symes outline these events very clearly. However, message boards and websites (on 4chan, the dark web, archived and active sites of organizations tracked by anti-hate groups) also reveal that while discussing the Middle Ages makes white nationalists happy, it is distinctly tertiary in neo-Nazi apologetics to Holocaust denial and World War II.

The claim that the only way white nationalists can use (medieval) history is because we academics let them simply isn’t true (strangely, the same charge isn’t laid at the door of historians of the Civil War or Nazi Germany). The resurgence of white nationalism has not, and does not, depend on historians failing to challenge abuses of history. Recognizing this simple fact problematizes the entire point made, implicitly or explicitly, in Symes’s essay and in numerous social media posts in medieval studies recently. Ironically, at the same time we are told by Donna Zuckerberg that simply doing our job “setting the record straight” is also not sufficient, because neo-Nazis won’t accept our claims in any case. When medieval historians dispute that contention, they are often ridiculed as Rankean positivists. The discussion often shifts to history departments as compromised organizations, and then to history as a problematic discipline whose origins lie in imperialism, white supremacy, and nationalism.

Ultimately, this insistence on the sullied origins of the historical profession undergirds most of Symes’s post, because it purports to explain both how white nationalists can dream of a “white Middle Ages,” and why the profession needs to be changed. Drawing on diverse work in the subfield of “medievalism,” Symes advances three examples to show this pernicious influence, in medieval studies particularly: the Monumenta Germaniae Historica (Historical Monuments of Germany, or MGH), the work of medieval professor Charles Homer Haskins and Haskins’s “star pupil” Joseph Strayer, and the public writings of Rachel Fulton Brown.

While there are many depressing examples of “compromised” pre-modern studies, Symes makes several interpretive and historiographic errors in the examples she has chosen. The MGH is actually a good example of how 19th-century scholarly institutions could, while functioning as vehicles of national identity, also stand athwart that century’s racialized discourses. Founded in 1819 (not 1826, the date of its first scholarly edition under Georg Pertz), MGH historians were not preparing “a unified German imperial state.” Scholars of 19th-century Germany have largely abandoned that kind of teleological reading of 1871 into 1815. Despite the racialized writings of Fichte and Arndt, German “nationalism” had no fixed trajectory after Napoleon—recent work has emphasized how unstable German nationalism was after unification. As Arno Mentzel-Reuters, the current president of the MGH, pointed out to me in recent correspondence, MGH historians had nothing to do with Gobineau, and their bitter struggle against von Treitschke’s vicious anti-Semitic screeds of 1879–81 put the MGH squarely at odds with the growing tide of central European anti-Semitism.

Other examples in Symes’s post fall similarly short. Somehow, she conflates Strayer’s Cold War anti-Stalinist liberalism with white supremacy—an interpretive leap that is not supported by her link to Strayer’s classic study On the Medieval Origins of the Modern State. A more nuanced assessment would have considered Strayer’s AHA presidential address of 1971, or Jordan’s foreword to the new edition of Medieval Origins, which highlights Strayer’s interest in assisting newly independent nation states. Haskins’s assessment of Versailles is a complicated work, using phrenology to help define race and “the nation” while decrying the Jim Crow South, among other things. But recent research by Heather Blurton also suggests that Haskins was deeply frustrated by the way Versailles used medieval history to justify territorial appropriation.

Meanwhile, Symes spends over 400 words attacking Rachel Fulton Brown, her example of a historian who practices the “wrong” kind of history. The resultant picture skirts straw man territory. Fulton Brown’s conservative beliefs in the value of “Western civilization” have been publicly attacked since 2016 as “white supremacist” by Dorothy Kim of Vassar. The ongoing dispute between these professors is well beyond the scope of this column, but Fulton Brown’s response to Kim hardly qualifies as “persecution.” Fulton Brown’s admonition to learn “some f*cking medieval western European Christian history” is glossed by Symes as “In other words, . . . a fictive, hermetically sealed, and fiercely policed ‘western European Christian’ space. It is not the history of a multiethnic, culturally diverse, religiously pluralistic, interconnected medieval world.” In other words, Fulton Brown practices a kind of history more suited to 1817 than 2017.

However, Symes omits the second part of Inside Higher Ed’s quotation from Fulton Brown: “And I meant to say that because, in fact, in our field, we have been utterly open to that kind of complication of understanding what the Middle Ages were like.” In point of fact, Fulton Brown is correct, both about the profession and about “the history.” One would be very hard-pressed to find professional medieval historians, of whatever political persuasion, who taught a “white nationalist” curriculum. And the problematic term “medieval” is indeed most often associated with Christianity in western Europe between 500 and 1500. It was certainly not “hermetically sealed” (Fulton Brown never argued that it was), but it was hardly “fictive.” However much we emphasize its breathtaking diversity and global connections, the historical fact remains that from around 1000 CE western European Christian society developed in ways connected to, but distinct from, other parts of the world. Simply establishing the widespread presence of non-“white” Europeans in medieval Europe is, as Fulton Brown argues, a powerful counter to white supremacist narratives of a racially “pure” homeland. After all, as she put it in her blog post, “Medieval European Christianity was focused not on Europe, but on Christendom—and the center of Christendom was not in Europe, but in Asia.” In short, Fulton Brown’s arguments can be debated, but are not “flagrant and easily demonstrable falsehood[s].” Rather, they represent a tradition that fights neo-Nazi appropriations of the past without adopting critical theory to do so. Whether that is a good or bad thing is a different debate.

Clearly, Symes and I read this debate, and our profession, differently, and I look forward to continuing these important conversations in medieval studies and the historical profession generally. In any case, as we do I hope that we will all continue to prize nuance, accuracy, and diversity of opinion as the AHA Statement on Standards of Professional Conduct calls on us to do.

Our colleagues in Holocaust studies, who have some experience in combatting false historical narrative without necessarily adopting critical theory to do so, tend to be clear-headed about the central importance of “getting the factual basis right,” as Christopher Browning has argued. This does not mean that historians should look at the profession’s history with an uncritical eye, but it does mean recognizing the complexity and contingency of that history, and the robustness of the historical method. Our professional survival does not depend on converting to a particular theory or methodology, especially at the cost of historical accuracy. To surrender accuracy and nuance, however good the cause may be, is to surrender the greatest tool our profession has to combat extremism. 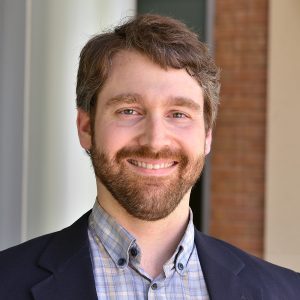 Daniel Franke is assistant professor of history at Richard Bland College of William and Mary, Petersburg, Virginia. He is currently completing his first monograph on the Hundred Years War and military networks, and editing the Oxford Handbook of Medieval Warfare. Follow his blog The Winds of War and Twitter handle @danfranke79. The opinions expressed here are his alone, and do not reflect those of his employer.