Historians Tackle the Present in Six Late-Breaking Sessions at AHA18

In the past year, historians have frequently been called upon to make meaning of news. From Confederate monuments and statues around the country to President Donald Trump’s travel ban executive orders, historians have answered the call to provide historical perspective and analysis. As AHA executive director Jim Grossman wrote recently in Perspectives, the assumption that “historians should have a voice in public culture and in public policy” is a guiding principle for the AHA’s agenda. 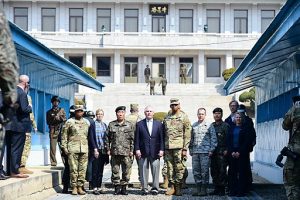 Secretary of State Rex Tillerson visited the Demilitarized Zone between North and South Korea in March 2017. Late-breaking sessions at the 2018 AHA annual meeting address current national and international issues, including the North Korean nuclear missile crisis. US Department of State

In this spirit, for the first time, the 2018 AHA annual meeting includes a set of member-proposed late-breaking sessions—comprised of historians, public officials, and activists—that speak to current national and international issues and controversies within the discipline. The sessions address some of the biggest headlines of 2017: the North Korean nuclear crisis, the independence referendum in Catalonia, and the Trump administration’s efforts to undermine nearly a century of federal regulatory authority, among others. Selected from proposals submitted just a few months before the meeting, the six sessions are shining examples of historians’ ability to respond quickly and thoughtfully to breaking news.

Historians’ voices are often drowned out in the deluge of cable and social media quick takes. The lack of sophisticated, in-depth historical analysis of issues of extreme importance—perhaps to human survival itself—prompted several historians to propose “The North Korean Nuclear Crisis in History.” Chair Mitchell Lerner (Ohio State Univ.) notes that current media coverage of the crisis “has fixated on personalities and psychologies to the detriment of understanding the deep historical currents at work.” “We seem to be moving ever closer to a possible conflict that would have absolutely devastating consequences,” says Lerner, “and yet we rarely hear discussion of the long-term cultural, institutional, ideological, and geopolitical forces that brought us to this point.”

“Contextualizing Catalonia: The History of Catalan Nationalism and the Spanish Constitution with Respect to the 1st of October” explores the historical forces that, says panelist James Stout (Univ. of California, San Diego), gave rise to “grandmothers fighting with riot police to cast a ballot” on October 1 in the Catalonia region of Spain. Organized by members of the Association for Spanish and Portuguese Historical Studies, the session, says Stout, seeks to set straight “many misunderstandings regarding Catalan nationalism, particularly in regard to the resurgence of xenophobic nationalisms that have characterized politics in Europe and the United States recently.”

3. Historians on The Vietnam War

Even when history is the centerpiece of public culture, historians’ voices are often indirect. This was the case with Ken Burns and Lynn Novick’s The Vietnam War. The documentary, according to Carolyn Eisenberg (Hofstra Univ.), “offered a defining portrayal of the war, conveying the reality of that experience through stunning visual footage, evocative music, and multiple firsthand accounts.” Yet the voices of historians are absent from this 10-part series, at least on screen. But historical interpretations of the series are “profoundly important,” says Eisenberg. “A Fateful Understanding: A Discussion of the Film Documentary The Vietnam War by Ken Burns and Lynn Novick” brings together five historical perspectives to provide interpretations of the film. As Eisenberg notes, “how our society remembers the Vietnam War illuminates the present and can affect the future.”

In two late-breaking sessions, panelists look at some of the Trump administration’s most controversial and  momentous policy decisions during the last year—on immigration and on federal regulation. “We are currently witnessing a broad-scale attempt by the Trump administration to ‘deconstruct the administrative state,’” says Edward Balleisen (Duke Univ.), chair of “Revolt against Regulation in the Time of Trump: Historical Perspectives.” “At a moment of such profound reorientation,” says Balleisen, “this roundtable brings together historians, a political scientist/legal scholar, and two former high legal regulatory officials—one a Democrat, one a Republican” to provide historical perspective on how best to understand the slow dismantling of the “regulatory state.”

“Immigration Control and Resistance: Historicizing the Present Moment, a Conversation between Historians and Activists” puts historians into conversation with immigration activists to, as Andrew Urban (Rutgers Univ.) says, “challenge scholars to rethink what a ‘usable past’ might look like.” Like many immigration historians, says Urban, “we are concerned about increased ICE raids, the repeal of DACA, travel bans, and plans to build a wall on the US-Mexico border.” The session’s organizers hope that insights from legal activists would “encourage historians to ask questions about how things came to be.” “We believe that at a moment when immigrants face increased dangers and threats to their human rights, historians must craft a research agenda that responds,” adds Urban.

Finally, a group of historians, including current AHA president Tyler E. Stovall (Univ. of California, Santa Cruz) and AHA president-elect Mary Beth Norton (Cornell Univ.), will host a discussion on “Historians and Sexual Harassment: The Challenge for the AHA.” Sponsored by the AHA Professional Division and the Committee on Gender Equity, the session will focus on how the Association can “best address issues of sexual harassment in the discipline.” AHA executive director Jim Grossman says, “The behavior that is at issue here is not ‘late-breaking’; it has a long history. The question on this table is how we, as historians, can best put our own house in order.”

Everything has a history, and all discourse on public policy and public culture should be informed by history and historical thinking. The AHA sifted proposals for significance (with a very high bar) and the imperative of discussing an issue now rather than waiting a year. Join us for what promises to be both thoughtful and lively discussion.