The Preservers and Retrievers of Stories, Part 1

Editor’s Note: This is the first installment in a two-part column. The second installment can be found here.

In early January 2022, I traveled to the town of Temacapulín in the state of Jalisco in west-central Mexico. I had planned to conduct archival and ethnographic research on the history of migration in Mexico’s hinterland. Because of the town’s long history, I expected to find a fruitful archive. In addition, recent protests against a government dam project had brought the otherwise peripheral community into the international and scholastic spotlight. 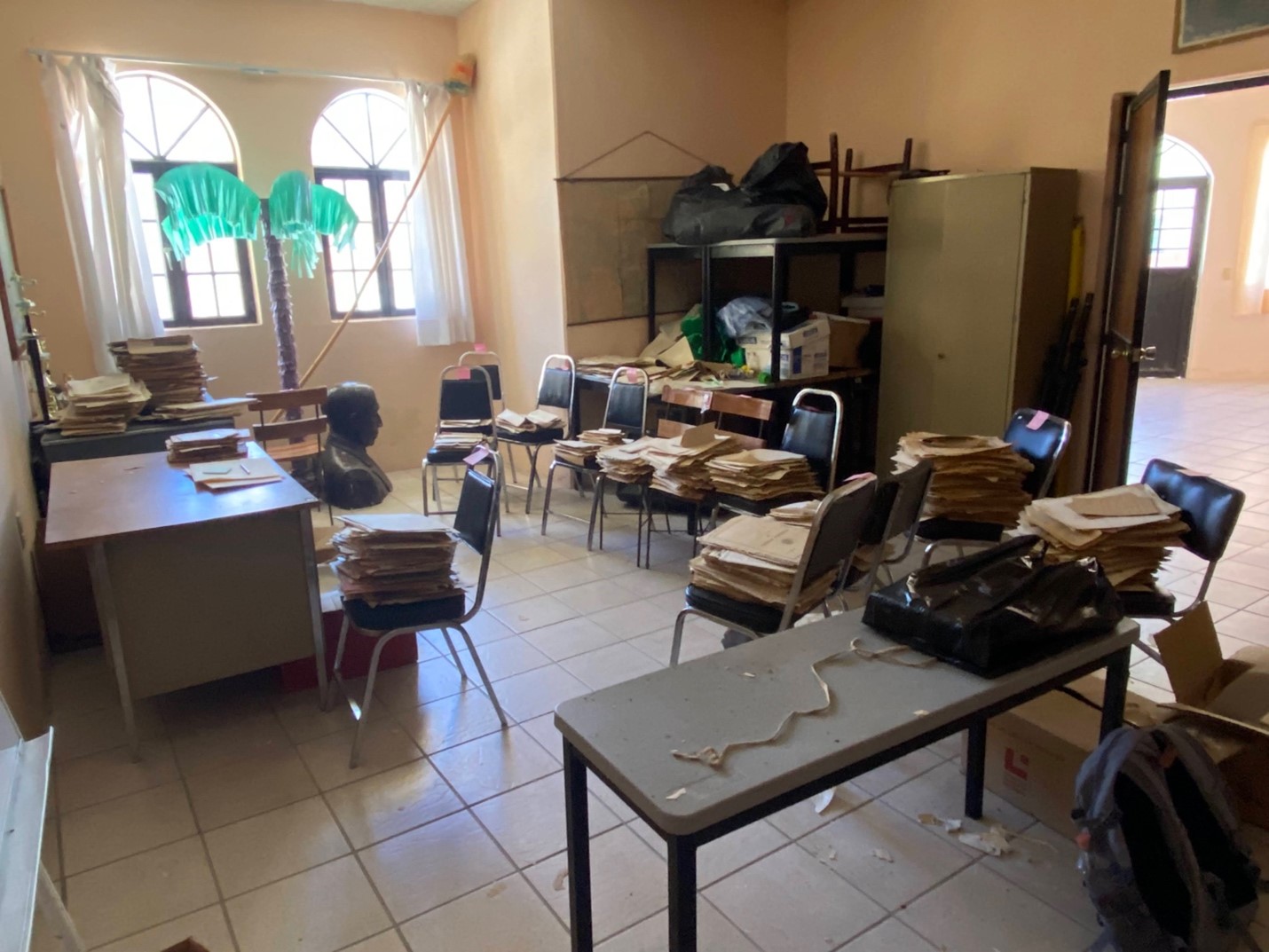 If you entered this room to do your research, would you know where to start? Fernando Amador II

When I arrived, I entered the town’s administrative office and introduced myself to Anna, the secretary. I explained my presence and asked if I could conduct research in its archive. Anna led me to a storage room full of federal newspapers; I explained that I was looking for old documents related to the town. She gestured to the corner of the room—those large boxes and a gray filing cabinet over there might contain those records, she said.

With Anna’s help, I slid one of the heavy boxes toward a table and opened it up. Inside was a large stack of documents. We placed them on the table and filed through their contents. It was exactly what I needed—maybe. The papers inside dated as far back as the 1810s, but contained no semblance of order: papers from the 1880s were next to others from the 1920s, all mixed in with files from the 1950s. The filing cabinet and the other boxes had the same disorganization. The documents’ physical condition was also worrisome, as they were covered with water stains, dust, and random litter. On top of one cabinet I found 19th-century documents glued onto a board. Anna explained that during the remodeling of the administrative building, the workers moved the documents to a run-down storage room in the elementary school. It is unknown how long they were there or who might have handled them, but they were rediscovered around 2014 and moved back. Though I had limited time and resources, I soon concluded that the only choice was to clean and organize the material to create a historical archive that would aid my research, the town, and future scholars.

The documents’ physical condition was also worrisome, as they were covered with water stains, dust, and random litter.

Historians rarely understand the terminology, organizational strategies, or labor required for establishing and maintaining an archive, and I was no exception. Systematizing the unorganized, unkempt papers of Temacapulín required extensive research on the theories, practices, and history of archival arrangement to develop a comprehensive plan to establish an archive and carry it out. The entire project lasted more than two months, saw the organization of close to 15,000 documents, and involved a dozen individuals. In addition, it gave me the opportunity to give back to the community.

But first, I required permission from Temacapulín. Although they could not offer many resources, both the town’s representative and municipal president were enthusiastic about the venture and gave their endorsement. Soon, everyone in the town of 300 knew about my work, and when I spoke to residents, they expressed their gratitude and understood the importance of preserving and organizing those records. I was also delighted to have the community’s support, which later became crucial when I asked for volunteers.

With the project approved by the town, I began to read about the basics of archival studies. Given that I could not spend weeks learning about the discipline, I reached out to a colleague at Stony Brook familiar with public history and received a list of texts. The suggestions I found most useful were Charlie Arps’s Archival Basics: A Practical Manual for Working with Historical Collections (2019) and David W. Carmicheal’s Organizing Archival Records (2018).

Historians rarely understand the terminology, organizational strategies, or labor required for establishing and maintaining an archive.

These texts provided a general understanding of archival systems and were essential in creating my plan to organize Temacapulín’s documents. Carmicheal explains that the purpose of an archive and its organization is to narrow the search for specific information. Most sources are not created with the intention that they will one day be housed in an archive and used by investigators. Thus, archivists grapple with how to best arrange thousands of records in such a way that each one can be found with the most ease. To do so, most archives implement various levels of organization. There are different ways to arrange an archive—something historians know well if they have conducted research in multiple archives, each with its own organizational system. However, most archives consist of three general levels of arrangement: collection, series, and files.

A collection is a group of records created or compiled by a single source. For instance, documents created by the delegation of Temacapulín will belong to the collection “Town of Temacapulín.” Some archives might use “fonds” rather than collections. The difference between collection and fond is not clear cut but, simply put, whereas a collection is “intentionally assembled,” usually by archivists, a fond is a “body of records . . . that has been created or accumulated as the result of an organic process.” For example, when a corporation creates documents during their routine activities and functions and stores them together, they make a fond. In Temacapulín, the collections we created included Temacapulín, Cañadas de Obregón (municipality), Towns of Los Altos de Jalisco (the larger region), State of Jalisco, States of the Republic of Mexico (excluding Jalisco), Federal Government of Mexico, United States of America, political parties, and corporations.

Next, a series is a group of documents compiled together because they relate to a similar activity or function. The series created in Temacapulín’s archive include revenues, ranches, statistics, school and education, minutes, miscellaneous, plans and land, public health, public works, agriculture and livestock, elections, crime and judiciary, foreign relations and migration, acts and subpoenas, and the Cristero War. In some larger archives, subseries are created within series to add another level of organization.

Lastly, files are a unit of documents that relate to the same event and activity within a series.

After my reading, I had a tentative plan, but the labor required became a second challenge. First, documents had to be sorted by decade. Then, the documents for each decade had to be separated by collections, then by series. Each series then had to be placed in folders and labeled with the decade, collection, series, dates, and folder number. Lastly, these needed to be placed in boxes. I began this process on my own, which I initially thought would take a matter of a couple of weeks, but I quickly realized the true scope of the project. With thousands of unorganized papers all around me, I could not finish this project by myself. I needed help.

Fernando Amador II is a PhD candidate in history at Stony Brook University. He tweets @amador_ii.