Abortion, Choice, and the Supreme Court

The AHA’s History Behind the Headlines Webinar

On July 6, 2022, an AHA webinar, “Abortion, Choice, and the Supreme Court: History Behind the Headlines,” brought together experts on abortion and legal history to discuss the landmark US Supreme Court decision in Dobbs v. Jackson Women’s Health Organization. 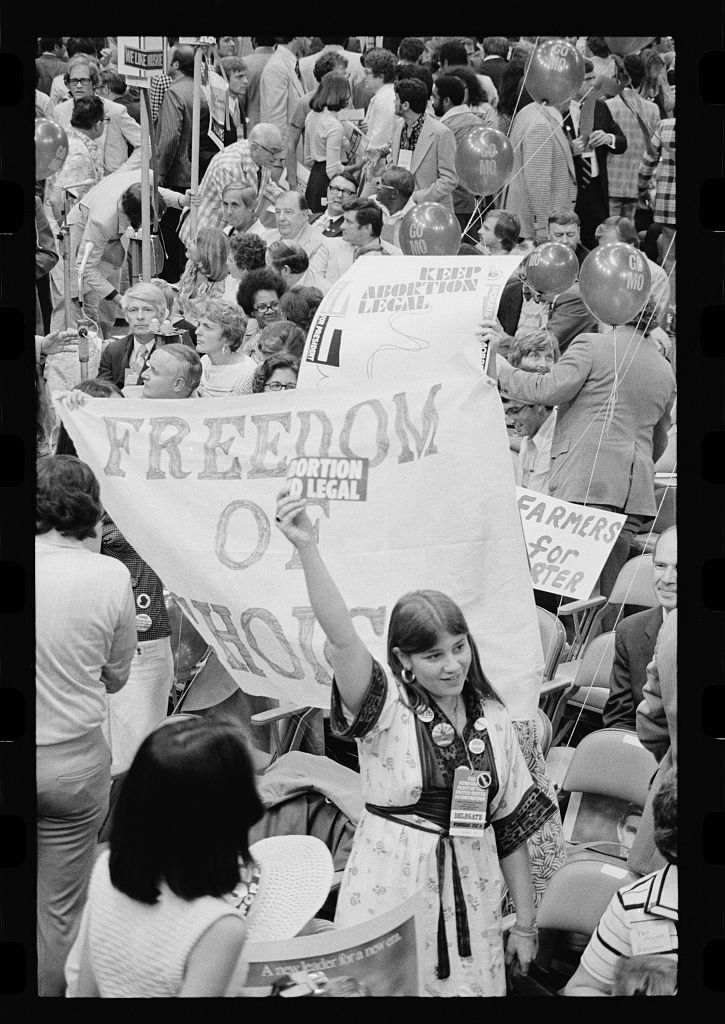 Demonstrators at the 1976 Democratic Party Convention used some of the same slogans pro-choice activists use today. Library of Congress/Warren K. Leffler, 2005696369

As AHA executive director James Grossman stated in his introduction to the session, “historians and historical thinking have a critical role in public life.” Dobbs clarified the stakes of this observation: the majority decision relied on a selective understanding of abortion’s place in US history. Historian Leslie J. Reagan (Univ. of Illinois at Urbana-Champaign) moderated the discussion among historian Nancy F. Cott (Harvard Univ.) and legal scholars Melissa Murray (New York Univ.) and Aaron Tang (Univ. of California, Davis). Together they considered how Americans arrived at this moment, almost 50 years after Roe v. Wade, and why history is central to this jurisprudence and its implications.

Murray began the discussion by carefully parsing the decision penned by Justice Samuel Alito. The first part of Alito’s opinion upheld the Mississippi statute banning abortions performed after the 15th week of pregnancy with support from six justices. The second part overturned the precedents of Roe v. Wade and Planned Parenthood v. Casey, with Chief Justice John Roberts breaking with the conservative majority for a 5–4 decision. Murray argued that “the debate in this case was a war between two different historiographies in the right to an abortion.” The history of abortion that Alito described is “very much at odds with some of the views that historians have taken.” Because of his narrowly originalist interpretation, which focused on 1868 when the 14th Amendment was ratified, Alito’s history left out a much longer precedent of legal abortion.

Cott and Murray described this longer history, dating back to British common law before the establishment of the American colonies. Common law allowed abortion before “quickening,” defined at the time as when a pregnant woman first felt fetal movements—a subjective moment that only the person with child, not a medical professional, could determine. Cott argued, “It is an important tradition for a woman’s liberty” to be the one to decide if she has a pregnancy eligible for abortion. Only in the 1820s did US states begin passing laws banning abortion, which slowly expanded into other states until the end of the 19th century.

The debate in this case was a war between two different historiographies in the right to an abortion.

Today’s laws rely in part on a particular Christian interpretation of “life beginning at conception” or “fetal personhood.” Historians, however, have identified three threads in 19th-century abortion laws: sexual morality, sensationalized journalist accounts of women dying during abortions, and the professionalization process of medical doctors who, as Murray described, wanted to “root out the faith healers and midwives who had previously dominated the business of birth.” It was only in the second half of the 20th century that abortion opponents turned to the definition of “life.”

The moral question in particular is different between past and present. Cott described 19th-century abortion prosecutions when the concern for the fetus was “amazingly, almost shockingly absent”; instead, “abortion was seen, like infanticide, as trying to cover up what was really the crime—sex outside of marriage.” Thus, although Alito pointed in his decision to a moral condemnation of abortion across American history, that moral objection is different today.

Tang then addressed several areas where the Alito opinion differs from historians’ understanding of abortion’s place in US history. In the opinion, Alito states that the most important fact is that at the time the 14th Amendment was adopted in 1868, three-quarters of the states (28 out of 37 total) criminally punished abortion at all stages of pregnancy—a fact he repeats four times, including a 22-page appendix documenting those 28 states’ bans. Yet that count is not accurate. Two states listed (Louisiana and Nebraska) banned abortion only by “noxious poison” rather than “via instrument.” Alabama was included, though an 1857 state supreme court case clarified that abortion was not criminal before quickening. Laws in Oregon, Texas, Virginia, and other states are similarly misrepresented. As Tang noted, “The bottom line is that the most important historical fact in Alito’s opinion is not really a fact at all—it is contested.”

Yet history was essential to this decision. Cott said that Alito “at least had to consult history because the Roe decision relied on it to such an extent”— about 20 pages of that opinion, penned by Justice Harry Blackmun, also dealt with historical precedent. But, as she continued, “where and when do history and tradition end if we can show in the common law interpretation that there was a great freedom for abortion at quickening that lasted up to the 1860s? Isn’t that enough?” Historians themselves had attempted to provide the necessary historical context for this case. In September 2021, the AHA, in collaboration with the Organization of American Historians (OAH), submitted an amicus curiae brief to provide an accurate historical perspective on abortion.

History here is an excuse.

But does history really matter here? As Tang argued, “I don’t think we should overemphasize the role that history played as a realist matter in Justice Alito’s opinion. Practically speaking, politically speaking, the truth is history is irrelevant to what Justice Alito and the other four justices are trying to do.” Whatever laws and precedents they found would have been used to limit the right to abortion. “There are reasons and there are excuses for what the Supreme Court is doing,” he summarized, “and I think history here is an excuse. It’s an instrument that Justice Alito is using to arrive at an outcome that is a canonical position among members of the Federalist Society [and] the five members of the majority, who have been trained with this as an ideological litmus test that Roe should be overruled by any means necessary.”

However, part of that ideology insists on a historical foundation. The “originalist” interpretation embraced by many conservative justices requires constitutional interpretation be based on the time the Constitution and its amendments were written—hence Alito’s close attention to 1868, when the 14th Amendment was adopted. Murray said that “this opinion is the apotheosis of originalism as a method of constitutional interpretation,” an idea that arose in the 1980s and has been lauded as a way to restrain liberal judges. Yet Murray sees this opinion as showing how “originalism is as selective and itinerate” and “as purpose-driven” as liberal constitutionalism, at least according to its critics. Alito is “cherry-picking from the history, taking what supports his argument and discarding what does not, and advancing this as the ‘original view’ of the abortion right at the time the 14th Amendment was ratified.”

And this interpretation may lead to the dismantling of rights beyond abortion—the rights to nonconformity and pluralism in our society. In a concurring opinion, Justice Clarence Thomas said that he wants the court to go further and review cases including Griswold and Eisenstadt, which protect contraception, and Lawrence and Obergefell, protecting sex and same-sex marriage. As Tang argued, “Movement conservatives are not even close to finished with their assault on established constitutional rights,” including abortion.

Antiabortion activists are already planning their next steps, and Tang identified two possible strategies. They can pass state laws centering “fetal personhood” and pursue their constitutionality in the courts. But they are more likely to pursue a federal statute banning abortion—for which history will matter. If originalism is based on the question of “What is the history and tradition of abortion as of the moment of the constitutional provision?” a new statute would not be bound by the history of 1868 and the 14th Amendment. Instead, Tang suggested that opponents of such a ban could turn to the 5th Amendment due-process right, ratified in 1791 and requiring consideration of a longer history and tradition. As Cott pointed out, women could not vote and had no say in politics in 1868. “Which history is going to be the one that this court looks to?”

Historians are not done with this case. Mere hours before this webinar, the AHA and OAH issued a joint statement, History, the Supreme Court, and Dobbs v. Jackson, expressing dismay at the Supreme Court’s disregard for the true history of abortion in the United States. As the statement says, “We expect that historians will continue to correct the court’s misinterpretation about the history of legalized abortion in the US in their own research, teaching, and public speaking, while also addressing the multifaceted dilemmas presented by this decision.” Based on the panelists in Wednesday’s webinar, historians are already heeding this call to educate the public on Dobbs and future cases.