What Story Do You Want to Tell?

It was 13 manuscript pages, beautifully—sometimes vexingly—composed, with strange syntax and long sentences with phonetic spelling. Titled “In which I declare what happened to the soul of Queen Isabel de Borbón,” encountering this manuscript jolted me from a transcription haze. Sitting in the cold, quiet reading room of El Escorial, the monastery-palace built by Spanish King Philip II in the 16th century, I began to read the gripping account. I wasn’t sure exactly where it would fit into my dissertation project, but I knew immediately this manuscript recounted a remarkable story. 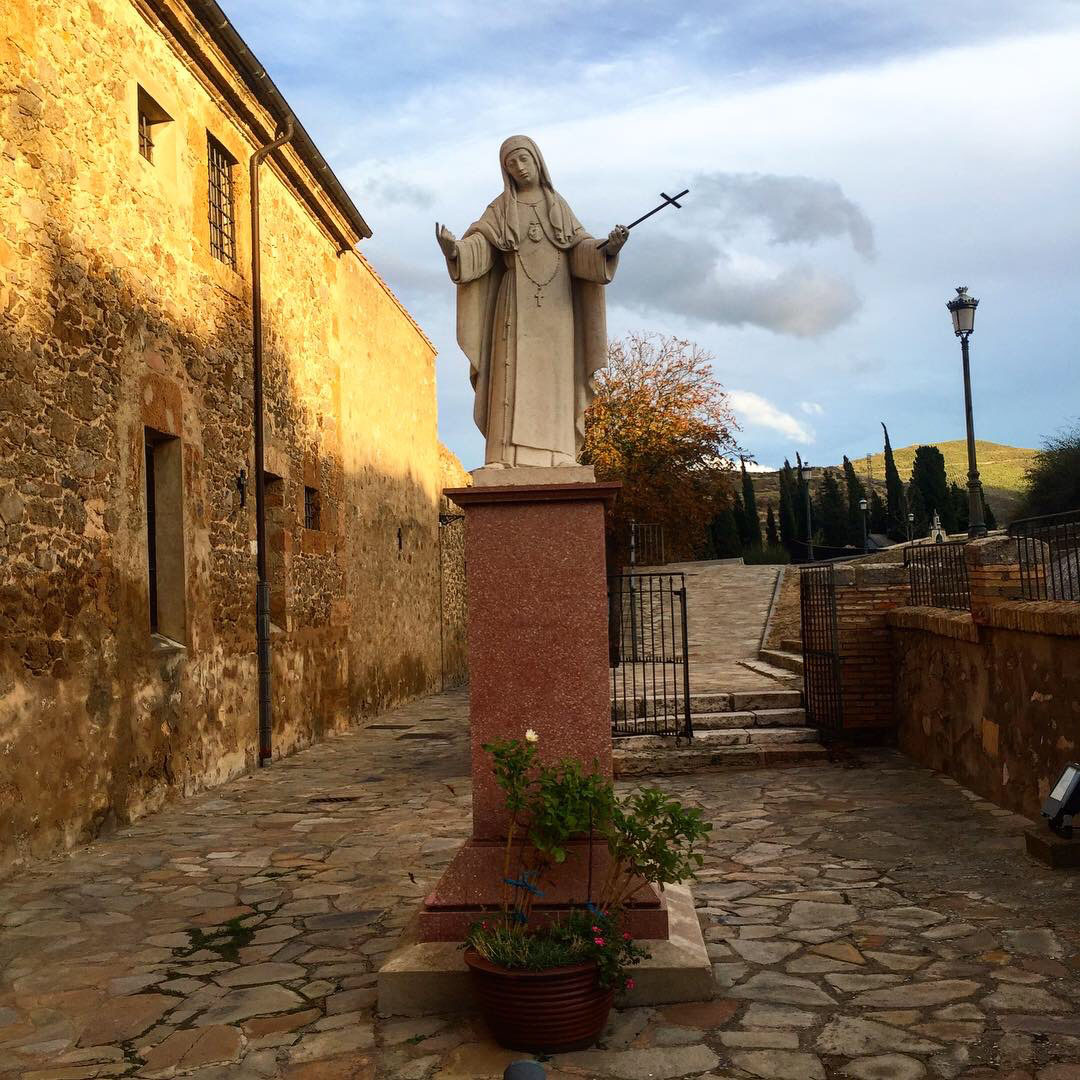 This document tells of a miraculous vision of Purgatory, as experienced by a Franciscan abbess named Sor María de Jesús. In the village of Ágreda in northwestern Spain, the nun saw the floor beneath her crack and part to reveal a subterranean chasm filled with the suffering souls and licking flames of Purgatory. The soul of Isabel de Borbón, queen of the Spanish monarquía, emerged to speak with Sor María. This vivid account is at the center of my episode of Reverb Effect, a podcast by the University of Michigan Department of History.

When selected as the new season producer and host for Reverb Effect, I felt a mix of emotions. On the one hand, I was elated. The podcast’s mission to explore “how the past reverberates in the present” for a general audience reflects a deep commitment to public engagement and narrative storytelling that underpins what I believe to be our obligation as historians: to teach and critically engage with others. On the other hand, I felt uncertainty. The gig required that I not only oversee a season of episodes by my colleagues, but that I write and produce my own episode emerging from my dissertation. Doubt crept in: How could I make a Spanish nun in the 1630s relevant to a podcast listener today? Who would care?

Yet I quickly realized that this was how nearly every historian who worked with me on an episode was feeling. I was asking the wrong questions. The right question, my refrain to each episode producer as we work on scripts, has turned out to be: What story do you want to tell?

Once my mindset shifted from “who will care?” to “what’s the story?” the episode—and its narrative possibilities—began to unfold. Instead of putting pressure on my research to be relevant and seem interesting, I focused on curiosity and what drew me to this project in the first place. How might I explain my findings and speculations to a friend, a family member, an undergraduate student, or even on a first date? The answer: I was telling a story about how women in another time understood the world and the afterlife, and how they shared and developed this knowledge.

How could I make a Spanish nun in the 1630s relevant to a podcast listener today? Who would care?

Relevant and interesting. And a story worth telling.

The difficult task of presenting the story of Sor María’s handwritten pages to a general audience did not completely recede. Drawing a compelling narrative from a larger research project brings with it several challenges, including striking a balance between historical context and engaging narrative content, considering how to create familiar touchpoints for an audience of nonexperts, and determining a portion of the project that is optimal for the purpose.

I turned, first, to identifying narrative elements in the existing project, right under my nose. Compelling stories feature a narrative arc, such as an identifiable beginning, middle, and end; a manageable “cast of characters” or historical actors; and some kind of “anchor,” the story’s central framing device.

It might be easiest to start with the “anchor,” since, by definition, it holds and connects these other elements. In storytelling, an “anchor” can be a person, place, theme, or an idea. Effective narratives tether about their anchors, supported by evidence and examples connected to this centering point. Drawn to Sor María’s miraculous vision of Isabel de Borbón, I anchored to an idea-place: the Catholic Christian Purgatory. Purgatory brought narrative potential, audience appeal, and Sor María’s interaction with it seemed the right size for a podcast episode. Focusing on Sor María, miraculous visions in general, or one of the nun’s entire works would not unleash the kind of story I wanted to tell. Purgatory called out.

Effective narratives tether about their anchors, supported by evidence and examples connected to this centering point.

Thus anchored, the challenges of the narrative arc and cast of historical actors became more manageable. By connecting each part of my unfolding story to Purgatory, I avoided including extraneous historical context, alienating or overwhelming an unfamiliar audience, and producing far more than what would play out effectively in a 30-minute episode.

Finding an anchor was just the first part of the process. I still faced the challenge of presenting my story in a meaningful way. This required some creative thinking about the possibilities and limitations of the oral narrative medium. Because, in a podcast, the audience must listen, setting the scene with auditory cues and presenting source evidence in a way quickly intelligible for listeners becomes critical. I began with a reenactment, bringing Sor María’s vision and conversation with the soul of Isabel de Borbón to life with voice actors and sound effects. Sor María’s manuscript became a conversation, as words from her quill became dialogue, inflection, sound. The past became immediate, tangible, and powerful, and my episode was on its way.

Thinking narratively about my dissertation resulted in more than a podcast episode. It has changed the way I think about my project as a whole. Becoming aware of how I want to tell historical stories has shaped my writing process, creating dynamic integration of the source materials and surrounding context that support and connect along narrative arcs instead of solely methodological or chronological ones. I am more careful with the stories found in the archives, discerning and respecting their unique power to move the arc forward and engage an audience. And when I feel stuck, when certainty eludes me, I return to that vital question: What story do I want to tell?

Hayley R. Bowman is a history PhD candidate at the University of Michigan. Her dissertation explores the early modern Spanish world through the eyes of Sor María de Jesús de Ágreda. In 2020–21, Hayley hosted her department’s podcast, Reverb Effect. She tweets @hayleyrbowman.