Bruce Bennett is a senior lecturer at the University of Botswana. He lives in Gaborone, Botswana, and has been a member since 1992. 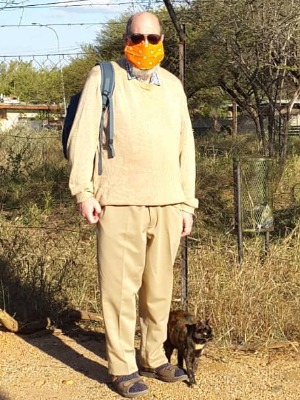 Good luck, mainly. It has been, if not a long and winding road, a somewhat meandering one. I started off in New Zealand and wrote my MA thesis on New Zealand foreign policy. Then I went to England and wrote a PhD thesis on church and politics in Britain. I went to Botswana in 1993 almost by accident, and rapidly discovered it was where I wanted to be. The University of Botswana was then a hugely positive environment, dedicated to developing the country. Historians, including students, were working to recover and understand African history. I have spent my entire career here except for a year in Malawi (Chancellor College, Zomba) in 1998, which I also enjoyed.

Where to start? Botswana is an easy place to live. Living in a society different from the one in which I grew up has contributed to my world-view in ways that are hard to define. I have wonderful colleagues and students. The city of Gaborone has grown but is still reasonably practical.

I have been increasingly interested in the philosophy of history, and I recently published an article co-authored with a theoretical physicist, Moletlanyi Tshipa, about historical causation and the Many-Worlds Interpretation. We hope to develop our ideas further. In African history I am working with Maitseo Bolaane on some issues in precolonial Tswana society. Also, I am trying to find a publisher for a book that might be described as distantly descended from my PhD thesis.

Yes, quite a lot. It started as soon as I got here. The History Department has a student research project, and we all attended student presentations. The research was often ground-breaking. That got me started in African history, initially in areas such as religious history which connected with my previous background. Later I was asked to assist with a philosophy of history class, and found it fascinating.

I do not know that there is anything that will excite readers. I once found a Cabinet minister collected dirty limericks on official papers. More than once I have found that something has entered the published record but is simply wrong. The scrawled unofficial marginal comments are often valuable, and I wonder if this is a dimension email records will lack. But really, it is the sense of connection, even a fleeting one, with real people in the past, the awareness that they lived and felt as much as us.

Neil Parsons, Black and White Bioscope: Making Movies in Africa 1899 to 1925, a fascinating study of film production in Africa long before the usually mentioned starting points. Also the recent collection Botswana Women Write, which has historical as well as literary material.

There is a lot of valuable African work that is not very accessible in the west. You need to look at minor journals.

Two novels by Botswana authors: When Rain Clouds Gather by Bessie Head, about independence-era Botswana, and The Scattering, by Lauri Kubuitsile, about the Herero genocide. Also the New Zealand science-fiction film The Quiet Earth.

It is holistic. Everything connects. It helps you to see that the human world works through complex processes, and that our reality is neither the same as the reality experienced by past people, nor completely divorced from it. We try to show the problems with naive ideas of “historical facts.” But at the same time, if we accept the destructive approach that there is no access to the real past, we surrender the field to the powerful people who will create a past that suits them. “Who controls the past, controls the future.”

I am probably a bit unusual for an AHA member, since I am not an American, I do not live in America, and I do not study American history. I joined when I was first seeking a job because I was looking at US universities. I discovered that I got a lot out of things such as the AHR and Perspectives. It is a luxury, but it seems I can not give it up.