“I have 5GB of stuff from the Reagan Library,” said graduate student Varsha Venkatasubramanian (Univ. of California, Berkeley). “I’m not going to use all of it . . . but someone out there might. I should be willing and able to share it.” She joined the Archival Records Discussion Group, a project of the Society for Historians of American Foreign Relations (SHAFR), to do just that. Historians in the group can ask for assistance locating images of specific archival holdings or offer to share the images that they have with a peer who cannot travel this summer. 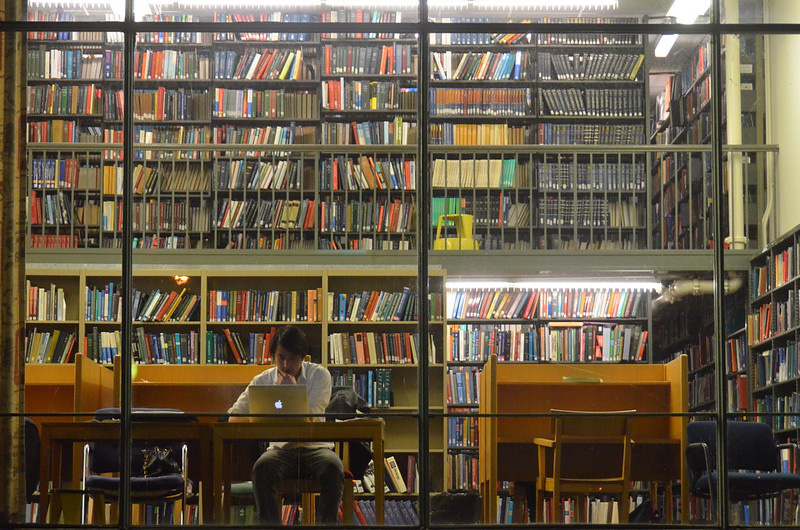 The exchange of images and scanned documents between historians may be the reality of research for a long time, a process SHAFR has helped facilitate. Chris Devers/Flickr/CC BY-NC-ND 2.0

The Archival Records Discussion Group began because Karine Walther and James Stocker, both members of a SHAFR travel award committee, needed to solve an immediate problem: How could SHAFR support grantees no longer able to travel this summer as a result of COVID-19? Stocker (Trinity Washington Univ.) suggested “something like a discussion forum to connect scholars to share their documents.” It took SHAFR’s IT staff just three days to set up a closed, online forum using Google Groups while Stocker and Walther (Georgetown Univ. in Qatar) drafted the initial guidelines for the forum. On April 18, 2020, the Archival Records Discussion Group launched. In just one month, over 250 members had shared documents related to more than 50 topic areas. “Neither of us expected it would take off this quickly or successfully, to be honest,” remarked Walther.

A spirit of collaboration and mutual support pervades the project. When graduate student Ben Allison (Univ. of Texas at Austin) realized that he had items from the Carter Presidential Library that another group member needed, he recalled, “it was a great feeling to know that I could help others in a time of need.” Some users, like Venkatasubramanian, took a more proactive approach. She posted a link to her Reagan Library documents instead of waiting for people to request specific files. “After that, I saw a lot more people willing to ask for files and share their own records,” she said.

Archivists themselves have been supportive of the project. The group’s policies and peer-to-peer design made it “clear that [SHAFR] wasn’t just going to create a website where users could post any image they had,” said Bob Clark, director of archives at the Rockefeller Archive Center. Although “there was some concern about what happens once these images are online,” he continued, “we didn’t see this as fundamentally and permanently changing our policies.” Staff at the Rockefeller Archive Center, according to Clark, “saw it as incumbent upon us to do everything we could in this moment to facilitate access to materials. . . . We felt like there were enough safeguards in place for the duration of this emergency that we were comfortable going there.” Archivists also recognized that this kind of exchange may have happened “behind the scenes” anyway. For them, it was better to participate so that researchers felt comfortable asking archivists questions and reaching out for support rather than risk driving the research process away from the institution.

A spirit of collaboration and mutual support pervades the project.

The Rockefeller Archive Center is one of five private archives that have agreements with the forum’s administrators that grant members special permission to share their research images with each other. Oxford University Archives, Harvard University Archives, the UN Archives in New York, and the Hoover Archives at Stanford University also agreed to allow users to share research materials within the confines of their institutional user agreements. But not every institution has been as receptive; at least one large university that SHAFR approached declined to participate in the project, and requests for comment by Perspectives went unanswered.

Official support from these archives is important, but it does not change the fact that group members remain limited to materials that their peers have already digitized. Participants described how frustrating it can be to have your research constrained by what a colleague decided to photograph or scan. At the same time, those limitations have pushed some group members to think creatively about the direction their research might take.

Victoria Phillips (Columbia Univ.) sees at least some possibility in being limited to what is available from her peers. For her, one of the exciting aspects of the group is that these exchanges “get us thinking about archival holdings we never would have thought to ask for.” She described seeing a post from someone working in the same general region and era as her current project but in a wholly different archive. Phillips said, “I was thinking ‘I probably have everything’ but then you think, ‘maybe I don’t.’ I might as well reach out.”

The exchange of images and scanned documents between historians may be the reality of research for a long time.

The forum can sometimes feel “pretty transactional,” said Venkatasubramanian, “but I have met two people who work in my area and . . . I think it will lead to other intellectual conversations.” Allison agreed, saying, “I’ve been able to share my thesis with some scholars who also work in my area and found the discussion group to be a great opportunity for networking.” The premise of the group may be document exchange, noted Phillips, but “it’s leading to richness of intellectual exchange that would not have happened otherwise.”

The exchange of images and scanned documents between historians may be the reality of research for a long time. “There’s a true financial crisis hitting academia which will impact people’s ability to travel for research,” said Phillips. With travel and research funds likely to shrink or vanish altogether, travel restrictions, and rolling closures of archives, scholars may rely on their peers for research help more than ever. SHAFR’s Archive Record Discussion Group reminds us that “history doesn’t have to be a solitary effort,” said Venkatasubramanian. “That’s what’s really been enlightening about this COVID period: it’s so much clearer how much you rely on people.”

Rather than replace archival research, these exchanges may help researchers work more efficiently. Malcolm Craig (Liverpool John Moores Univ.) explained that, “rather than replacing on-the-ground research, this kind of sharing helps to determine much more clearly whether a research trip is actually needed.” Walther and Stocker hope that, at least for public archives like NARA and the Library of Congress, their site continues beyond the current crisis and becomes a model for other organizations serving different subfields. Eventually, they envision a centralized list of these kinds of forums and their sponsors so that scholars working across subfields can connect and share resources.

This article was updated on June 18, 2020 to better describe archive involvement.

Ashley E. Bowen is editor of Perspectives. She tweets @AEBowenPhD.