Field Notes from Angola: Of Archived Archives and Anarchic Archives

Somewhere in sub-Saharan Africa, sometime in the new millennium: After a few days of negotiating my way into a provincial archive, the big day has finally come. The archivist opens the doors to an old shed, and, as my eyes become accustomed to the dusty dark, I discern the contours of a mountain of documents. “You can climb it and see whether you find anything that might interest you,” the archivist offers. And so I venture forth to mount the documents, picking up a few sheets here and there.

Searching, finding, and citing in an anarchic archive like this is entirely different from doing so in an online-searchable, or at least processed, collection in more established archives the world over. I know that a host of committed archivists are doing their very best to work with the limited resources at hand, and it is far from my mind to disparage their work. By no means do I mean to suggest that all African archives look the same; indeed, I have seen well-organized and efficient document collections on the continent. Nor do I mean to suggest that it is impossible to work with these kinds of situations. It just needs a more creative research approach to conceiving what constitutes an archive to begin with.

Be Prepared, and Think outside the Box 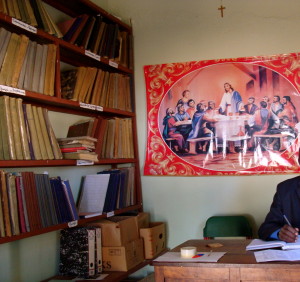 A church archive in Angola, 2011. Photo by Marcia Schenck.

Although my institutional home base for the duration of my research, the Angolan National Archive (Arquivo Nacional de Angola) does not collect any documents on post-independence Angolan history. Thus my research possibilities there were limited, and I needed to think creatively about how to get access to relevant documents outside of state archives.

Having an institutional affiliation proved essential. The staff at the Angolan National Archive made every effort to support me in my research endeavors. The director wrote the invitation letter necessary to apply for my visa and provided me with a valuable letter, certifying my bona fide status as a researcher. Armed with this document from the Archive, a letter from my university, and a brief research proposal in Portuguese, I started on my quest for sources.

I found what I was looking for in places as diverse as universities, research institutions, state ministries, the governing party archive, workers’ associations, and people’s tin trunk archives. Research conditions varied from air-conditioned offices in which I looked through folders myself, to waiting rooms in ministries where I was handed selected documents, to homes where I rummaged through people’s personal belongings.

Even though we often head straight for the documents, I found it paid off later to do the groundwork and set up a network of people from various archives, libraries, universities, and research institutions, as well as those who held an interest in my topic from an economic or political background.

In other parts of the world, a research trip can be organized by looking up opening hours online and sending a few emails ahead of time; not so in cultures based on face-to-face contact. I learned that investing in spending time with someone is key to effectively navigating institutions. After all, those responsible know the places much better than I do and determine my access to sites and sources.

In all this, the cellphone proved invaluable: in reconfirming appointments, reminding those who agreed to provide documentation of their promise, and being on call to explain my research to key people across the various institutions. Once the gatekeepers were informed and convinced, the legwork became much easier, and I found people genuinely willing to help a researcher.

Don’t Ignore Bureaucracy or the Power of Stamps

I quickly learned about the magical power of stamps. The formula is simple: the more the better. The colorful visible marks that bureaucracy leaves on your research proposal augment your status in the eyes of the beholder. The only thing that can trump stamps is a phone call from a superior, or even being introduced face to face by a coworker, friend, cousin, neighbor, or any other person to whom the gatekeeper owes a favor. If you have a combination of both, you are almost guaranteed some help in locating whatever it is that you are looking for, be it a person, a place, or a document.

I also learned the hard way that almost as important as having the right papers or knowing the right people is wearing the right dress. Generally that means the more formal, the better. Short pants, shoulder-free tops and open shoes are not welcome in public institutions to which universities and archives can belong. Thus, whatever the outside temperature, don your most respectable attire before you set out to explore the archives.

While hunting for archives in strange places, I was supported by a whole host of generous people who helped because they wanted to help. To those who trusted me with their data and who introduced me to a new way of thinking about time and place (which I will share in my next blog post)—you know who you are—thank you so very much!