All History Is Local: Debating the Fate of a Confederate Soldier Statue in Maryland

My barber and I occasionally talk about Rockville past as he gives me my biweekly trim. It’s usually in the vein of “My mother remembered when Rockville had wooden sidewalks” or “I can remember when your neighborhood was open fields.” Last Saturday I started it by saying, “What do you think about this meeting on Monday about the Confederate soldier statue?” “Oh, I knew that would come up again,” he replied. He walked over to one of the several paintings of Rockville in the 1950s that hang on the walls of his shop. “This is where it used to be, right in the middle of the Triangle.” 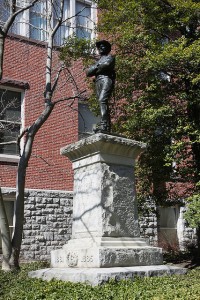 In 1971, when city officials redeveloped the downtown area, the Triangle (the local name for the town square) disappeared, and the statue was moved a short distance to the grounds of the Red Brick Courthouse. Its placement there has been periodically contentious ever since. In the weeks after the massacre in Charleston, the question arose once again, as it has in many other small towns across America.

On July 20 the mayor and council of the City of Rockville, Maryland, held a meeting to solicit public responses to the question of the fate of the statue. They convened a panel of experts that included local historians, a representative of the Montgomery County chapter of the NAACP, and the executive directors of the Montgomery County Historical Society and the Rockville historic preservation organization.

The crowd in the city hall council room overflowed into the lobby. The audience was mixed; those who chose to speak included men and women, blacks and whites, a 17-year-old high school student and elderly residents of Montgomery County. As people got up to say their three-minute piece, it became clear that while the headlines report a national debate, change happens in the context of small communities across the country. This larger historic moment we’re living through, one in which we’re asking questions about the commemorative decisions of an earlier period of American history, is happening in specific ways in different places across the country, and a sense of individual identity and belonging to a community is at its core.

The Rockville statue was dedicated by the United Daughters of the Confederacy on June 3, 1913—the 50th anniversary of Gettysburg and Jefferson Davis’s birthday. It stands facing south, and the plaque on the pedestal reads, in part, “That we through life may not forget to love the thin gray line.” These facts alone would be enough to polarize opinion, and angry words were spoken. But the debate overall was civil and constructive. Many felt that the statue served a valuable educational purpose. Two local historians who lead tours of historic Rockville spoke of how the statue provided an opportunity to discuss the history of race in America. Many who argued for retaining the statue (either in its current location or on the grounds of a local museum) did so not from some misguided reverence for a failed insurrection, but rather to remember and educate about the war, slavery, racism, lynchings, Jim Crow, and the civil rights movement. The controversy about preserving Confederate symbols and monuments is often presented as primarily a debate between history and heritage, between a recognition of the real causes and implications of the Civil War and an unwillingness to reckon with these hard truths. At the Rockville meeting, the word heritage was hardly used, whereas barely a sentence was uttered all night that omitted “history.”

While the primary cause of the Civil War was not states’ rights, its memory is deeply rooted in a strong sense of place and belonging to a community, a county, a state. But at least in the context of this particular locality, most people value a knowledge of the past that does not ignore its difficult parts and respects the historical actors. Anita Neal Powell, president of the Montgomery County chapter of the NAACP, said that if the statue is removed, “we must still tell the history.”