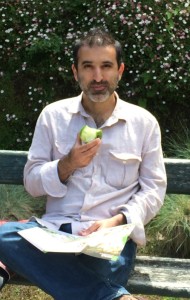 John Ghazvinian is an independent scholar, writer, research associate for the McNeil Center for Early American Studies at the University of Pennsylvania, and an adjunct lecturer at Rider University.  He lives in Philadelphia, Pennsylvania, and has been a member since 2013.

That’s a good question. I actually loathed history in high school and when I went to college, I planned to major in anthropology or maybe chemistry. I wish I could remember exactly how or why or when that changed. But I fear those details are shrouded, as they say, in the mists of time.

A gargantuan (1200 pages at last count) history of US-Iranian relations, from the seventeenth century to the present day, under contract with Knopf. It will either turn out to be the best or the stupidest thing I have ever done.

Oh yes. I went to graduate school thinking I was going to become a historian of seventeenth-century England. Once I got there, I realized I was actually more interested in the Middle East, so I wrote my dissertation on British travelers to Iran and the Ottoman Empire. To make matters worse, I also realized I had no real interest in an academic career, so I spent most of my free time in grad-school working as a freelance journalist (mostly reporting for the London bureau of Newsweek, but also some of the British papers). My first book — Untapped: The Scramble for Africa’s Oil—therefore ended up being a straight-up work of journalism.

For this latest project, I’ve gone back to doing ‘serious’ historical scholarship, but it’s still very important to me to be reaching a wider audience. I’ve tried to dedicate my career to walking the line between these two worlds, journalism/writing and academia. On a good day, I think I’m managing to pull it off. On other days, I think I must be bonkers.

Iran and the West is an absolutely masterful, riveting documentary series made by the BBC a few years ago. The sheer range of top—level figures they managed to interview (on all sides), the footage, the narrative, the dramatic tension—I could just watch it again and again (and have).

I’m not sure I’m equipped to answer this question, since I’ve never really been part of the ‘profession’. What I’ve always valued has been my own independence. I made a decision very early on that I was not going to go down the road of trying to be a professional career academic, as I had no interest in what seemed like a grueling and demoralizing process. I’ve never regretted that decision.

Curiosity. Honestly, it’s not something that had even occurred to me until last year. But then I thought it would be interesting to go to the conference and be part of something a little larger than myself and my research.

Since I just joined last year, I have yet to attend a meeting, but I am looking forward to going to New York this January.

Yoga. It’s been a pretty big part of my life since I did a teacher training a couple of years ago. I now teach a couple of classes a week here in Philly.

I would love to see the historical profession become a little more open to the amateurs in its midst. I think there is often an unspoken assumption that ‘independent scholar’ means ‘failed academic’—when in fact some of us make a very conscious choice to work on our own. Our contributions are sometimes eccentric or unvetted, sure. But every now and then we bring something new and fresh to the conversation.