Graduation Advice Past and Present: A Commencement Address with Historical Perspective 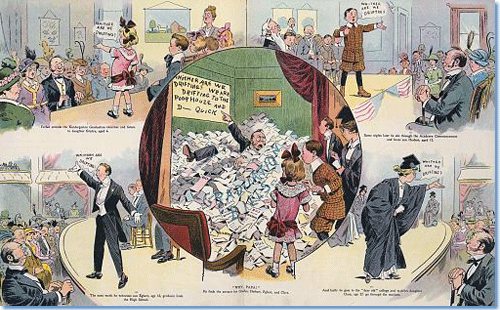 This is an excerpt from the commencement address given at Boston University's history department convocation on May 18, 2013.

I know you're all worrying about what you're going to do now, and, for you, thinking about the future means facing that mythical beast known as "the job market." But don't forget all the other crazy stuff you're going to have to deal with that isn't related to your day-to-day work. Stuff that you have no idea is coming. At some point in life, you're going to get asked to do something daunting, like give a wedding toast, speak at a funeral, or do the commencement address. You might get asked to serve as a jury foreman, or you'll find yourself suddenly leading a coup against the PTA president at your kid's school-I don't know. The point is you're going to be able to do these things, and hold down a job, because you majored in history.

Your education has taught you how to think critically and carefully and how to communicate effectively. It has shown you how to see the world around you as something analyzable. The work you've done will allow you to bargain and argue and problem-solve in ways that will be forever transferable, no matter how many careers you eventually explore.

Because students of history are at their best when they go out and collect evidence, evaluate it, and craft it into a persuasive story, I decided that the best way to tackle this unexpected honor was to do a little research myself. I went in search of the history of graduation speeches and made a few interesting discoveries. First, it turns out that Americans have been dishing out advice with their commencement addresses since at least the beginning of the 20th century. In 1901, for example, one professor instructed Radcliffe graduates to "cultivate the best of manners, as these were the outward expression of character," and also to "build up a small but choice library." In 1933, a more cantankerous speaker admonished the Stanford graduate to get down from his new-fangled, gasoline-propelled "spanking little roadster," stop with the "self-pity," "play it straight," and "build a new world.

"In 1954, Adlai Stevenson, a progressive leader of the Democratic Party, told Princeton seniors that their power was "virtually beyond measurement." "And don't above all things be afraid to think for yourself," he said, "For yours is a great adventure at a stirring time in the annals of men." That advice perhaps only seems weird when compared to the address Stevenson gave the following year at Smith College in front of another group of talented young people, who happened to be female instead of all male, as was still the case at Princeton. He told the women of Smith that they should embrace "the humble role of housewife," that their job was to keep their husbands "purposeful" and "whole." Your men, he counseled, would be setting off to uplift the downtrodden masses of foreign lands and ensure the survival of the free world. "Here's where you come in," he told them in one of the greatest examples of mansplaining of all time. "While I have had very little experience as a wife or mother," he admitted, this assignment "has great advantages." You can do it at home "in the living-room with a baby in your lap or in the kitchen with a can opener in your hand. If you're really clever, maybe you can even practice your saving arts on that unsuspecting man while he's watching television!"

As a final example, we might take the commencement speech of Rod Serling, the creator of Twilight Zone, who spoke to high school graduates in Binghamton in 1968, right as the nation seemed like it might succumb to the hippie apocalypse. "Wear what you want to wear," he told them. Grow beards. Don't grow beards. Enlist and go to Vietnam. Stay home and protest the war. But, people, don't go "sniffing glue and trying LSD.

"We chuckle at these now outdated insights, and we might be tempted to think that we have become smarter, or more worldly, but those who have studied history know that we are no better-only different-from people in the past. Imagine how, in 100 years, others will judge the homilies that now commonly fill our own speeches. How old-fashioned and silly will 21st-century pronouncements sound? For instance, Conan O'Brien recently advised Dartmouth graduates: "You cannot iron a shirt while wearing it." Or take Stephen Colbert's recent tip: "Being pre-approved for a credit card does not mean you have to apply for it." Or here's Dick Cheney at a commencement in 2003: "The battle of Iraq was a major victory in the war on terror.

"It seems especially necessary lately to put a cynical twist on the age-old graduation motto to reach for the stars. Here's how the writer Charles Wheelan recently put it: "Don't make the world worse ... . Everyone will tell you that you can change the world ... but remember that 'changing the world' can include things like skirting financial regulations and selling unhealthy foods to increasingly obese children. I am not asking you to cure cancer. I am just asking you not to spread it."

We feel particularly bad about where we are right now. If we aren't looking to the past to chuckle and feel superior, then we often look to it with nostalgic longing. We worry that things aren't as good as they supposedly used to be. But rather than looking back to decide how much better or worse off we are now, we can look back in order to gain new perspective on ourselves, to find inspiration in how others have faced great challenges. Reading old commencement speeches reminds us that there have always been travails.

Imagine graduating with the African American class of Atlanta University in 1906. Their commencement speaker, the anthropologist Franz Boas, warned them that, to counter charges of inferiority, they would have to "recover for the colored people the strength that was their own before they set foot on the shores of this continent." Those graduates entered a world of worsening segregation and racial violence, where the only "job market" was in menial labor. Or picture graduating in 1917, right as the United States joined the horrific slaughter known as the Great War. One commencement speaker painted a bleak picture for those students, too. "The whole elaborate structure of modern civilization," he said, "seems crumbling into dust.

"Or think of those who graduated in the depths of the Great Depression, when some had gone hungry to get their degrees, or remember those who emerged from college during World War II. In 1944, the creator of Lifemagazine, Henry Luce, said to graduates: "All of us wish that we might welcome you into a different sort of world than it now is."

Even after the Allied victory, during that supposed golden age of prosperity and suburban barbecuing, Winston Churchill went all Lord of the Rings on the students of Westminster College in his famous "iron curtain" address, telling them that "a shadow has fallen" upon the world. It was, he said, a "solemn moment for American democracy, an era of pain."

Apparently it has been a tradition not only to give graduates advice but also to then promptly scare them half to death. Picking up on this in 1979, Woody Allen offered this to graduates: "More than at any other time in history, mankind faces a crossroads. One path leads to despair and utter hopelessness. The other, to total extinction. Let us pray we have the wisdom to choose correctly."

History can give us courage and a sense of proportion. It can teach us to move beyond ourselves and envision other worlds, to put ourselves in others' shoes. It teaches us to be suspicious of easy answers, to understand the role of chance, but also to recognize the ways in which individuals continue to make a major impact. Historical knowledge is powerful currency for this century. It can deliver justice to those who have long awaited their due recognition. It enables us to see all the ways in which those things we take for granted as natural and normal-as just the way things are-are not, in fact, timeless. And if you recognize that the world is something that has changed, you will see more clearly how it can be changed again.

We need more people with historical sensibilities in all walks of life, to be suspicious when talking heads distort the past for political ends, to laugh at funny historical references, and to bring a rich and nuanced sense of the human experience into everything they do. So thank you for majoring in history, and thank you to all of those friends and relatives out there who supported these graduates in their academic endeavors. Congratulations and best of luck to the class of 2013.

-Brooke L. Blower is an associate professor of history at Boston University.