Retirement from the National History Center

In 2000, James Banner revived the venerable idea of a center for the study of history in the nation's capital. Wm. Roger Louis, who was AHA president-elect at the time, made the initiative the focus of his presidency. In 2002, the AHA created the National History Center, with Louis as its first director, to further the Association's mission of public outreach. Louis retired as director in May, though he will continue to lead the center's summer seminar on decolonization. In recognition of his leadership, the center's trustees named him founding director. Here is his farewell message.

It is always difficult to figure out the right time to retire from an organization that one has helped to create. If one goes too soon, opportunities might be forfeited. If one stays on indefinitely, there is the danger of one person dominating the institution for too long. At the risk of becoming a sort of institution myself, there were certain goals I wanted to achieve as director of the National History Center (NHC). But it has always been my intention to retire at the end of 12 years-I feel that a dozen years is a pretty good run, and that it is now time to allow a new director to introduce new ideas and purpose. 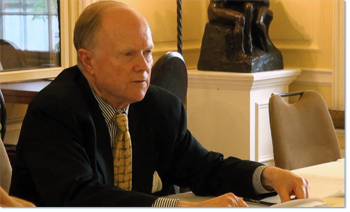 I will do my best further to assist the center by continuing to help in whatever way I can. The present strength of the center fortifies my view that it is a good time to retire from the job of director while still lending my assistance in various ways to further the purpose and programs of the center.

When we began work on the National History Center during my AHA presidency in 2001, we hoped that it might eventually symbolize the place of history in American public life. At first, we thought we had the magnificent gift of a building from the Library of Congress. When that opportunity faded, we nevertheless carried on to create, with the encouragement of the AHA, a virtual center-in other words, an organization with the programs and other attributes of a center but without a large staff or a physical presence other than at the AHA headquarters at 400 A Street SE.

The goal from the beginning has been to reach out to broader audiences, providing historical context for a better understanding of today's events. I'll not list all the center's programs, but they include, above all, the Congressional Briefings, which offer members of Congress and their staff the historical background of current policy issues. We sponsor a biannual lecture series at the Council on Foreign Relations in New York and a book series with Oxford University Press on Reinterpreting History: How Historical Assessments Change over Time. Among our newer initiatives is a program called Historians, Journalists, and the Challenges of Getting It Right, which brings together historians and journalists to discuss historical issues of mutual interest.

There are two programs of which I am especially proud. One is the annual seminar sponsored by the Mellon Foundation on the dissolution of the European colonial empires-what we call decolonization. The seminar meets every summer for a month, drawing 15 young historians from all parts of the world to carry on with their research and writing. We are now in the eighth year of the seminar. Former participants stay in touch with each other and stimulate ideas among senior scholars as well as the alumni of the seminar itself.

The other program I think is especially significant is the Washington History Seminar on Historical Perspectives on National and International Affairs that is co-sponsored by the Woodrow Wilson Center. It meets on a regular basis during the academic year at the Wilson Center and draws historians from within the government as well as those in the history departments in and around Washington. I believe myself that it is a significant achievement to have created a historical seminar that meets regularly in Washington. The seminar sessions are recorded and broadcast throughout the world.

As for the directorship, I am glad to pass it on to someone with fresh ideas and an imaginative view of how the National History Center might pursue its purpose. I believe my own 12 years as director to have been among the most rewarding of my life. I am proud to have helped create the National History Center as an integral part of the AHA and indeed as an enduring part of American and international public life.
-Wm. Roger Louis holds the Kerr Chair in English History and Culture at the University of Texas-Austin.