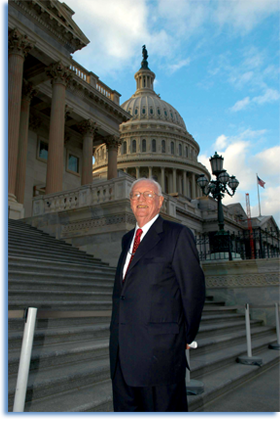 Political Biographer and Historian of the House of Representatives, 50 Year Member of the AHA

At the age of 80, Robert Vincent Remini transformed from history professor to public historian. The US House of Representatives had passed legislation-introduced by a former high school history teacher, Representative John Larson-to direct the Librarian of Congress to facilitate the writing of a privately funded narrative history of the House. To meet this request, Robert Remini was appointed distinguished visiting scholar of American history at the Library of Congress, where he spent the next three years writing The House (2006), a 200-year survey that drew in large part from his many biographies of political leaders. The effort led to his appointment as the historian of the House of Representatives, an unexpected turn after his long career teaching at the University of Illinois at Chicago.

Born in New York City, Bob Remini graduated from Fordham University in 1943. He had been planning to go to law school, but during his three years in the navy during World War II he spent so much of his free time on ship reading history that he returned from service to study history in graduate school at Columbia, receiving his PhD in 1951. At the suggestion of Richard Hofstadter, he wrote his dissertation on Martin Van Buren, which became his first book, Martin Van Buren and the Making of the Democratic Party (1959). It provided an analysis of sectional coalition-building from which the shadowy Van Buren emerged as the shrewd political operative behind the Jacksonian political movement.

In 1948, Remini married Ruth Kuhner, whom had met in kindergarten, and to whom he remained married until she died in 2012. They had three children: Robert, Elizabeth, and Joan. He taught first at Fordham University for a dozen years before moving to Chicago in 1965 to be chair of the history department at the newly created University of Illinois at Chicago Circle. He also founded and headed the university's Institute for the Humanities.

His attention then turned to Jackson's political opponents. He wrote biographies of John Quincy Adams, Daniel Webster, and Henry Clay, presenting their side of the political arguments of the Jacksonian Era. His last book, At the Edge of the Precipice (2010), dealt with Henry Clay's Compromise of 1850 "that saved the Union." Remini liked to recount how he once began to deliver an address from the steps of Clay's home in Lexington, Kentucky, just as a loud thunderclap sent his audience scurrying for cover. He took it as a sign of General Jackson's disapproval.

He continued his research and writing after becoming professor emeritus in 1991. That year he also delivered a lecture on Andrew Jackson at the White House. Over his career, he received numerous awards, among them the Chicago Public Library's Carl Sandburg Award, the Lyndon Baines Johnson Foundation Award, the Capitol Historical Society's Freedom Award, and the American Historical Association's Award for Scholarly Distinction (he was an AHA member for 63 years). He also traveled as a visiting professor at the Jilan University of Technology in China, the University of Richmond, the University of Notre Dame, and Wofford College. In 1997, he was named University Historian and began work on The University of Illinois at Chicago: A Pictorial History (2000), co-authored with Fred Beuttler and Melvin Holli.

Remini described himself as "pleasantly surprised" when House Speaker J. Dennis Hastert invited him to become historian of the House in 2005. After decade in which the office was vacant due to ideological differences, Remini helped restore its nonpartisan, professional stature, and was well regarded by members of both parties in both houses. Illinois Senator Dick Durbin described him as "a great historian, a great personality, with a smile on his face every minute of the day."

As House historian, he fielded questions from reporters, conducted oral histories, and gave talks to students, teachers, and others curious about the "People's House." Bob Remini called his experiences dealing with Congress unparalleled. "This has been such an extraordinary opportunity. I wouldn't give it up for the world," he told a reporter. "When you get into the inner workings [of Congress], when you walk in the chamber itself and you talk to people and you learn what they're doing-you really have a sense of being part of history, not just writing about it."