Hidetaka Hirota is a Mellon research fellow in the Society of Fellows in the Humanities at Columbia University, where he teaches in the Department of History and the Center for the Study of Ethnicity and Race as a lecturer. He lives in New York City and has been an AHA member since 2007. 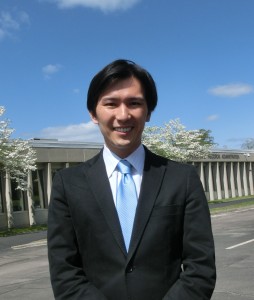 I always enjoyed reading stories about the past since my childhood. I developed an interest in United States history in particular as I encountered American historical topics, such as the Pilgrims, the Gold Rush, and the Civil War, in the course of learning the English language during my secondary education in Japan. In studying United States history as an undergraduate student at Sophia University in Tokyo, I became intrigued by the relationship among politics, economics, and ideology during the Civil War era and by the concept of nativism in American immigration. Finally, my advisor at Sophia, a prolific writer and engaging lecturer, showed me how exciting and rewarding historians’ work can be. He helped me decide to pursue my career as a historian.

I am currently working on a book manuscript that examines the origins of immigration restriction in the United States, especially American deportation policy, by exploring state policies for excluding and deporting destitute foreigners in 19th-century Massachusetts and New York. I argue in the book that these Atlantic seaboard states’ immigration policies, which were driven by cultural prejudice against Irish immigrants and economic concerns about their poverty, laid the foundations for later federal restriction laws. I am also developing my next book project, which is a synthetic history of nativism in the United States from the colonial period to the present.

By way of preparing for a course that I am currently teaching, Wealth and Poverty in America, I recently read Tyler Anbinder’s Five Points: The 19th-Century New York City Neighborhood That Invented Tap Dance, Stole Elections, and Became the World’s Most Notorious Slum. I first read this social, cultural, and political history work when I was in college, and the colorful episodes introduced in the book simply fascinated me. Revisiting the book now, I think it is a brilliant monograph that analyzes virtually every aspect of a single neighborhood, as well as its transnational connections, based on a remarkable range of sources while maintaining a lively narrative. Perhaps, the best part of the book is that readers can feel the author’s genuine passion about the subjects he explores. I hope to produce a book like this someday.

Generosity and kindness. The history profession can be disheartening, especially for junior scholars. We have to face a number of rejections and denials at various stages. While the profession itself can be tough, I find people in it exceptionally generous and kind. Our professional life, in many ways, depends on other people’s favor. We need somebody’s assistance to improve work-in-progress manuscripts, to apply for positions, to organize conference panels, or to simply keep departments or programs functioning. I think that historians are generally very generous toward requests for help from their colleagues, friends, or students, or even from people whom they do not know personally. As a relative newcomer to the profession, I always admire senior scholars’ generosity when they willingly agree to comment on my conference papers or other writings even though they are under no obligation to do so. More than once, I have heard historians saying that they help people, as their mentors and friends have helped them. This chain of good will is the history profession’s great asset that I sincerely value and respect.

Philadelphia 2006. After my first semester in graduate school, I was utterly disappointed by my poor performance in coursework and even began to think that I had picked up the wrong career. That winter, I attended the AHA meeting in Philadelphia, the very first academic conference in my life, out of curiosity. The conference turned out to be an eye-opening experience. It introduced me to a whole new world of vibrant discussion among people from diverse institutions with varied interests. On my way back to Boston, I set presenting at an AHA conference as one of my goals to achieve while in graduate school, which motivated me to stick to the profession. Four years later, I accomplished my goal by delivering a paper at the AHA meeting in San Diego.

I love both watching and playing soccer. Guitar has been my favorite hobby since I was 12 years old. I also like traveling very much. I am so glad that the history profession allows me to visit many cities and countries for research and conferences.