A Historian on the Hill

My Berkeley PhD in history led to a four-decade career in government and policy, but I never felt that I was leaving history too far behind. There were always opportunities for the training and sensitivities of the historian to insert themselves into my political activities. For example, at the end of 2012, as chief of staff for Democratic Leader Nancy Pelosi, I arranged a private viewing of the Emancipation Proclamation for Pelosi and our staff on its 150th anniversary. She told me the experience moved her deeply, and she soon returned, at midnight on New Year's Eve, with 40 other members of the House to hear a dramatic reading of the Proclamation.

Did that incident affect history? Did it have an impact on the fiscal cliff compromise that passed the next day? It's impossible to know for certain, but those legislators told me of the profound intellectual and emotional impact they felt in proximity to the original Emancipation Proclamation, and I know that experience would not have occurred without a historian being at the right place at the right time.

Throughout my career, I was a more acute observer because of my background as an historian. Parked with the speaker of the house, in a rainstorm, in a limousine, at the foot of the Spanish Steps in Rome, I listened to a phone call in which the president outlined his rationale for military intervention in Libya-hours before the bombing started-and gained insight into the unpublicized discussions that shaped earlier decisions of war and intervention.

In the White House's Roosevelt Room in September 2008, with the Democratic nominee for president, I watched as the treasury secretary entered, dropped to his knees, and begged the Democrats not to abandon the financial rescue effort. This display prompted Speaker Pelosi to remark, "Why, Hank, I didn't know you were Catholic!" A bit of levity, much needed at a moment when, as in 1929 or 1893, the economy of the nation-and perhaps the world-awaited decisions by US political leaders. 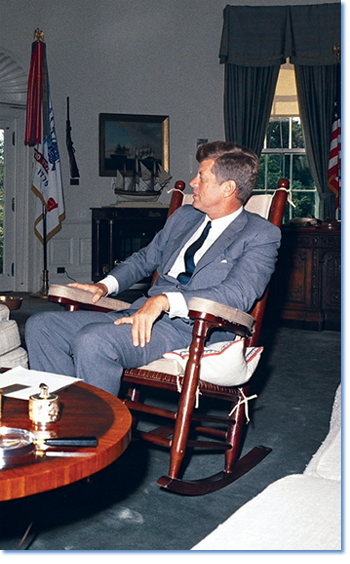 In 2001, I was tucked away for weeks in a hidden office in the Capitol with Senator Ted Kennedy, House Resources Chairman George Miller, and Committee on Education and the Workforce Chairman John Boehner, writing the No Child Left Behind education law, discovering only on the last day that the rocking chair I had been occupying had been JFK's in the White House and doubtless had been a silent witness to crucial moments in his presidency.

As a historian, I understood the importance of these events, the enormity of the decisions being made, and how they would shape the course of our national history. As a historian, I possessed a store of knowledge, and a perspective in approaching problems, that served me well and very differently than the lawyers and economists who fill senior staff positions.

Even in graduate school, at the University of California, Berkeley, in the mid-1970s, it was clear to me how the study of history would aid a career in government, but it was not always so clear to all of my professors. I recall asking for recommendations for a government internship, leading one professor to inquire pointedly what could have diverted me from the correct path of academic employment. Despite subsequent decades of dwindling numbers of academic jobs, the profession still remains too cautious about encouraging employment outside the academy, or encouraging the enrollment of students who might seek nonacademic careers-even though substantial percentages do.

And we should want them to do so, if we believe that history has value outside the academy, if we believe that historians share a special responsibility for reversing the current state of historical and civic ignorance. Citizens lacking a balanced comprehension of our history and governmental structure are susceptible to the ever-present misinformation spewed from partisan cable TV, talk radio, and innumerable blogs and tweets that, with no credibility filter or standard for accuracy, serves ideological rather than informative purposes.If voters are unaware that Congress is authorized to "promote the general welfare," for example, they are vulnerable to critics who assert that passage of a national health law, or restrictions on Wall Street abuses, are "socialistic" threats to the Constitution.

Those lacking an understanding of the antebellum period may miss the chilling warning bell that rings when a presidential candidate declares that "secession is a deeply American principle," or when governors embrace a nullification response to gun violence legislation.

Those without an appreciation of Reconstruction or the Jim Crow era are less likely to understand why many citizens are alarmed by the roughly 200 bills to restrict voting rights introduced in 41 states over the past two years, or when the Supreme Court strikes down a key provision of the Voting Rights Act. All these are very contemporary issues with dramatic and consequential historical roots.

Historians have an intellectual responsibility to combat the rampant distortions that fill our airwaves, bookshelves, and computer screens. Indeed, if competent scholars refuse to participate in civic discussions, then the credential of "historian" will be seized and exploited by those with partisan motives.

I am not advocating a history curriculum designed to promote patriotism, although I believe a sound foundation in history would increase respect for the nation's values and institutions. Nor am I talking about the rote memorization of names and dates that too often passes for history, especially at the secondary school level.We know that historical scholarship is valuable because of the analytic, critical thinking, and research skills that the training provides, an understanding of the evolution of society and its institutions, the relationships between competing forces and personalities, and the relentless struggles between the powerful and the dispossessed. We need to do a better job promoting those ideas. Expanding our vision of historians' career choices will help.

Departments should aggressively recruit a wider range of students, without an expectation they will select an academic career, just as law schools do not assume their graduates will all become practicing attorneys. And departments should deeply consider how to effectively prepare students for a variety of careers. Incorporating into the graduate curriculum courses in economics, government, and public policy, for example, would both attract a wider range of students and better prepare them for careers outside history departments.

We should also keep in mind that historians need not choose between the academy and other forms of public or private sector employment. Just as lawyers, economists, and scientists move easily between these sectors, so, too, can historians. Both history departments and universities should review promotion and salary decisions to ensure that a professor's decision to serve outside the academy is rewarded. That service also benefits the broader society, reinvigorating a respect for history and the value of the historian as well.

My history training guided my career, but my career also affected me as a historian. Working closely with a variety of leaders, getting to know them as people, demystified them in a way that helps me assess the giants of the past on a more realistic and human scale. Spending many hours discussing the fine points of legislation or the nuances of political strategy, with the president, the speaker, or a senator enhanced my respect for the burdens of office and my understanding of them as people trying to make tough decisions, not simply heroic figures chiseled in marble.

The combination of my training and government service enabled me to promote history in ways I could never have envisioned in graduate school. In 1994, I provided the staff work for Resources Committee Chairman George Miller as we created a national memorial at the site of Port Chicago Naval Magazine, where over 300 sailors, mostly black, died in a gigantic explosion in 1944, leading to an unjust court martial of 50 survivors. A few years later, we created the Rosie the Riveter-WWII Home Front National Historical Park at the site of the Kaiser Shipyards in Richmond, California, as well the Paterson Great Falls National Historical Park in New Jersey, commemorating the birthplace of American manufacturing. My training in history helped me recognize the broad historical significance of these sites, and to serve as an effective advocate for their preservation. Not choosing to be a professor by no means requires a graduate student to leave behind a love of history.

Even if there were no shortage of tenure-track positions in history departments, the discipline would do well to encourage its graduate students to consider the option of employment in the nonacademic sector. Nonacademic jobs should not be viewed as fallbacks or consolation prizes, but rather as valued opportunities for the historian's training and skills. Doing so will not only serve historians and history departments, but will broaden our nation's understanding and appreciation of its own history.

-John A. Lawrence served for 38 years as a staff member in the US House of Representatives, including eight years as chief of staff to Nancy Pelosi during her service as House Speaker and Democratic Leader. He is a member of the board of directors of the Hamilton Partnership, which is involved in the development of the Paterson Great Falls National Historic Park, and of the Advisory Committee on the Records of Congress. He is visiting faculty at the University of California (DC) and blogs. Lawrence is featured in the AHA's web series, What I Do: Historians Talk about Their Work.